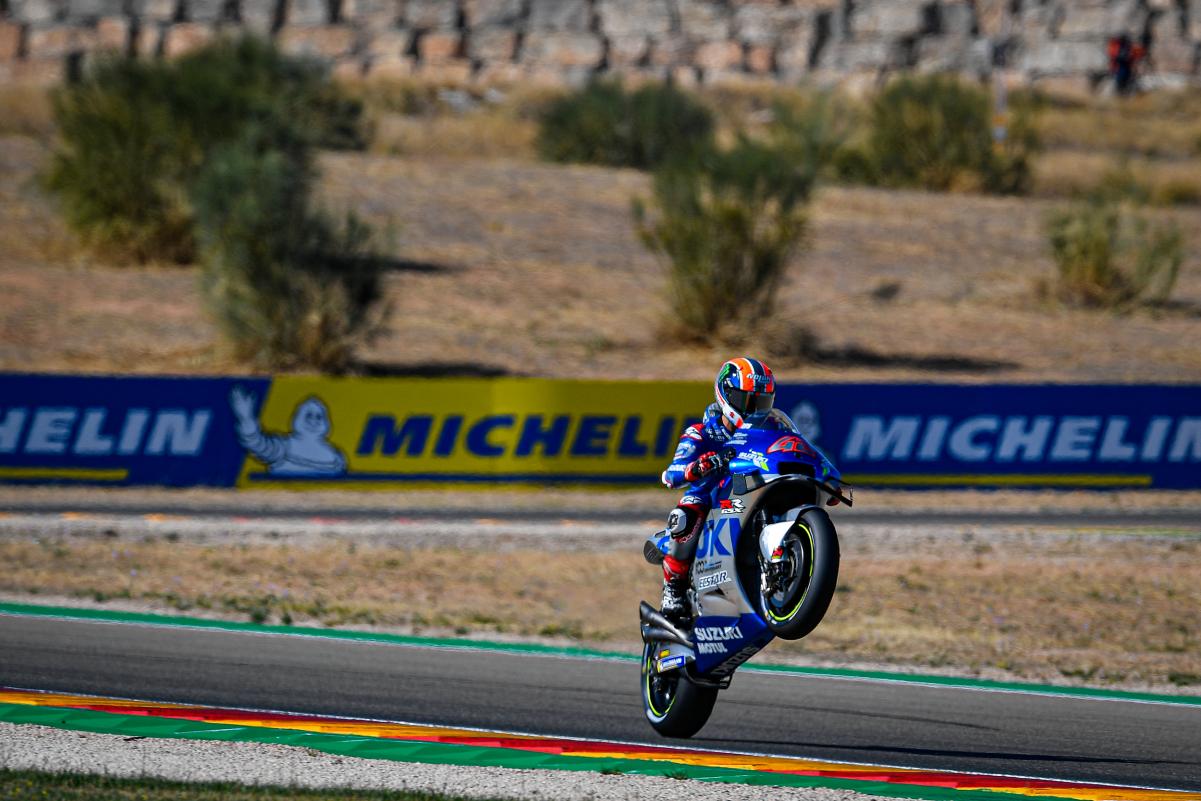 Yamaha’s Maverick Vinales finally made a good start in MotoGP as he led Aragon GP from Petronas SRT’s Fabio Quartararo and Franco Morbideli, while Suzuki’s Alex Rins was the biggest mover to be fourth, while LCR Honda’s Cal Crutchlow dropped outside Top 10.

Suzuki’s Joan Mir did well to be fifth as Pramac Ducati’s Jack Miller dropped back to sixth from LCR Honda’s Takaaki Nakagami. Ducati’s Andrea Dovizioso moved up well to be eighth from Honda’s Alex Marquez as Ducati’s Danilo Petrucci rounded out the Top 10.

Crutchlow slotted in 11th from Aprilia’s Aleix Espargaro, Avintia Ducati’s Johann Zarco, KTM’s Pol Espargaro and Brad Binder in the points position. It was disaster, though, for Pramac’s Francesco Bagnaia as he crashed out at Turn 5.

At the front, Vinales continued to lead the Aragon MotoGP race but Rins started to close in on him after the Spaniard passed both Morbideli and Quartararo in three laps. The Frenchman went slightly wide in the left-hander which allowed the Suzuki rider through.

Teammate Mir did not budge down as he too cleared both Morbideli and Quartararo to slot in third, while the MotoGP points leader lost to his teammate for fourth. Behind, Marquez showed supreme pace to be sixth after clearing Miller, Dovizioso and Nakagami.

He was lapping quicker than the Aragon GP leaders as Miller dropped to eighth behind Nakagami. The Japanese’s teammate Crutchlow made up one place to be 10th after a slow start as Petrucci dropped back behind the Brit rider.

The fight in front saw Rins clear Vinales at ease to take the Aragon MotoGP lead as Marquez passed both Quartararo and Morbideli to move up to third. The Frenchman came under supreme pressure from Nakagami and Miller soon.

He couldn’t hold on for long as Nakagami passed him for sixth as he lost to Miller and Dovizioso as well, with Crutchlow, Petrucci and Espargaro right behind. While Rins held the lead, Vinales came in trouble with Mir and Marquez right on his tail.

It was a close fight between the three as Mir and Vinales squabbled for track position. The Yamaha rider eventually lost second and soon third as well to be fourth as it became a Suzuki 1-2, with Marquez in third for the the first time in a dry MotoGP event.

Quartararo, meanwhile, continued losing places and dropped to 15th in couple of corners. It didn’t take long for the Frenchman to move outside the points position with Tech 3 KTM riders passing him along with Honda’s Stefan Bradl.

It got interesting at the front in the end stages with Rins leading as Marquez was on the charge as he waited for the right time to pass Mir for second and close in on to fight for the victory. Vinales and Morbideli held track position as Dovizioso passed Miller for seventh.

The last few laps saw major fight for the race win as Marquez pushed Rins to the brink, which included a small moment for the Honda rider in the left-hander. It didn’t deter him as he still carried on to hound the Suzuki racer to secure his first-ever MotoGP win.

However, it wasn’t to be as Rins had enough to win Aragon GP, his first of the 2020 MotoGP season, as Marquez showed his mettle in dry to get his second consecutive podium with Mir in third taking over the points lead by six over 18th placed Quartararo.

Vinales chased Mir towards the end but had to settle for fourth with Morbideli fifth, keeping off a faster Nakagami. The title hopes for Dovizioso was kept alive in seventh with Miller eighth ahead of Crutchlow and Zarco in the Top 10 standings.

In 11th was KTM’s Binder, who managed to pass both the Espargaro brothers in the last few laps. It was his teammate behind him in 12th with Aprilia’s Espargaro in 13th as Tech 3 KTM’s Iker Lecuona moved up to 14th while Petrucci dropped back to 15th.

#MotoGP #Aragon What a crazy race with a very surprising podium. #MsportXtra pic.twitter.com/sBZq54qbcN