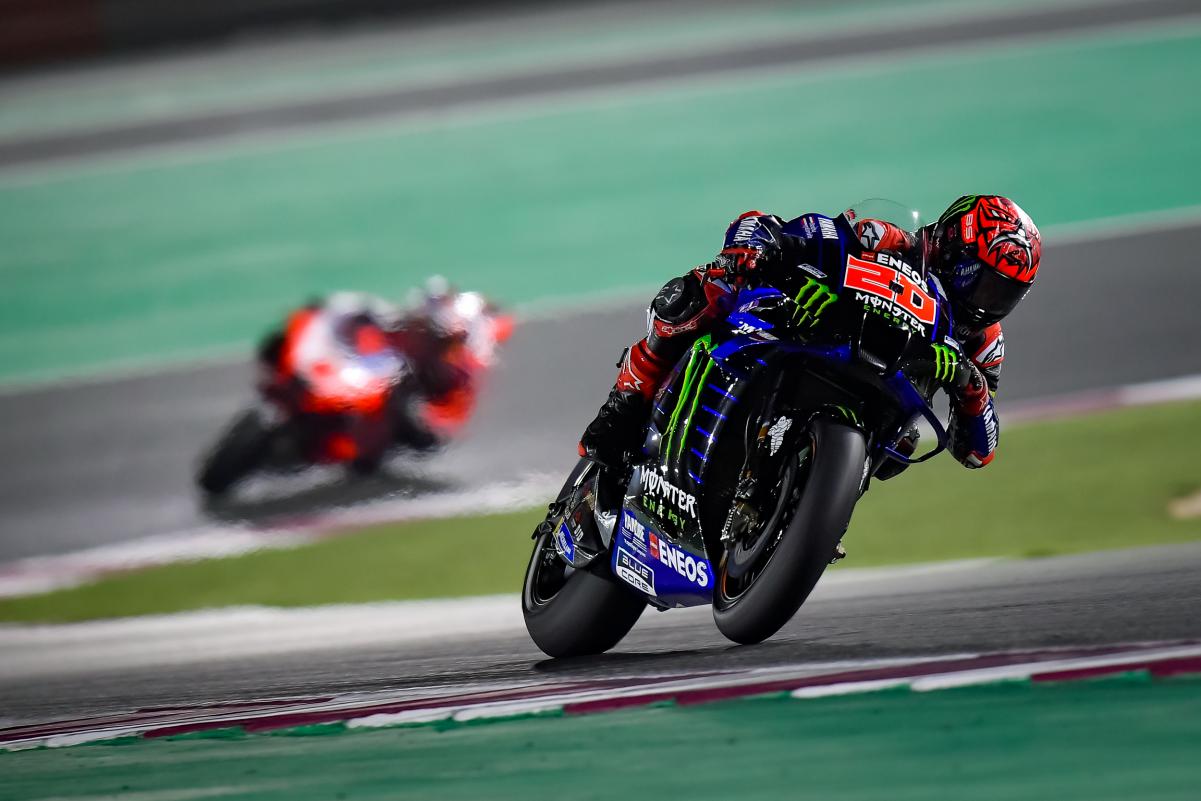 The first-time MotoGP pole-sitter, Jorge Martin, started the Doha GP well abode his Pramac Ducati, leading teammate Johann Zarco, as Aprilia’s Aleix Esapragro had a solid start to be third despite a push from KTM’s Miguel Oliveira at Losail circuit.

While the lead stayed with Martin, there were fights in lower of the Top 10, between Quartararo, Miller, Vinales, Binder and Ducati’s Francesco Bagnaia. They were chasing Mir, who momentarily halted the Frenchman’s charge, which dropped him behind.

Mir stood his ground as Bagnaia made up places behind him in seventh, even clearing teammate Miller, as Quartararo headed his teammate Vinales in the Top 10. They all gained a place on Oliveira, who dropped to 10th with about 15 laps remaining.

At the front, Espargaro tried a move on Zarco for second but the Spaniard couldn’t make the move stick, which allowed Rins to pass him. The Suzuki MotoGP rider pushed the Pramac man for second on multiple occasions but to no avail.

Zarco got him on the straight but Rins got him again, as he started to press on Martin. Espargaro, meanwhile, stood fourth as Bagnaia started to reel him in after he managed to pass Mir. The Spaniard held sixth from Miller, Quartararo, Vinales and Oliviera.

His teammate Binder was 11th as Petronas SRT Yamaha’s Franco Morbidelli ran 12th midway in the Doha MotoGP race, from Honda’s Pol Esapragro, Avintia Ducati’s Enea Bastianini and Honda’s Stefan Bradl in the Top 15 – the latter having a bad start.

The German dropped from inside the Top 10 to the lower end of Top 20, where Petronas SRT’s Valentino Rossi mostly all-race. Meanwhile, at the front, the cat and mouse game continued between Rins and Zarco, as the Frenchman got the Spaniard back.

Bagnaia managed to clear Espargaro for fourth, as the Aprilia MotoGP rider ran wide and dropped behind Miller and Mir, where the Australian passed the Suzuki rider too. The two Yamaha riders started to up their pace with Quartararo in eighth from Vinales.

Quartararo passed Espargaro for seventh, as Rins had a huge moment which cost him third to Bagnaia. It got feisty behind between Miller and Mir, where the Spaniard tried a cheeky move on the left-corner, where they touched each other.

The move was put under investigation as the two got together again on the main straight, when Mir got a bit wide and Miller came alongside. This allowed Quartararo to clear them all and move up to fifth, where he also managed to clear Rins for fourth.

The Suzuki rider was fifth from Espargaro, who regained some places, as Miller dropped to seventh from Vinales, while Mir dropped to ninth. Amid all this, LCR Honda’s Alex Marquez and Tech 3 KTM’s Iker Lecuona crashed out of the Doha MotoGP race.

It was all-changing behind the leaders, where Martin and Zarco stood first and second. Quartararo moved up to third after passing Bagnaia, but the Italian blast past him on the main straight. However, he went wide to drop down to seventh in the order.

At the same time, P Espargaro rand wide too, to drop to 13th from 10th. The wide moments allowed Quartararo to third, with Miller trying to have a look at him. Teammate Vinales was coming through as well, after moving up to fourth.

Miller dropped to fifth from Rins, Bagnaia, Espargaro, Mir and Binder in the Top 10. The fight continued at the front, where Quartararo finally managed to get both Zarco and Martin to lead the Doha MotoGP race, but the Spaniard fought back to retake top slot.

However, Quartararo got it back to lead and start bridging a gap. Vinales got Zarco for third but made a mistake which dropped him back, as Rins stayed on his tail all-through. Bagnaia fought back from a wide moment to be sixth, with Miller in seventh.

Behind, Mir finally passed Espargaro for eighth. But at the front, Quartararo had enough eventually to make it Yamaha two-in-a-row with his first win of 2021 MotoGP season in Doha GP, as Zarco passed Martin to finish second in a Pramac 2-3.

Vinales tried hard to pass Rins but the Suzuki rider hung on to fourth, while Bagnaia was sixth from Mir and Binder, as both Espargaro and Miller had a late drop to be ninth and 10th. A late push from Bastianini helped him to be 11th from Morbidelli.

Espargaro slotted in 13th eventually ahead of teammate Bradl, as Oliveira rounded out the Top 15. It was a misery for Rossi for most part, but he clawed back to a certain extent to be 16th from LCR Honda’s Takaaki Nakagami, Avintia’s Luca Marini, Tech 3 KTM’s Danilo Petrucci and Aprilia’s Lorenzo Savadori.