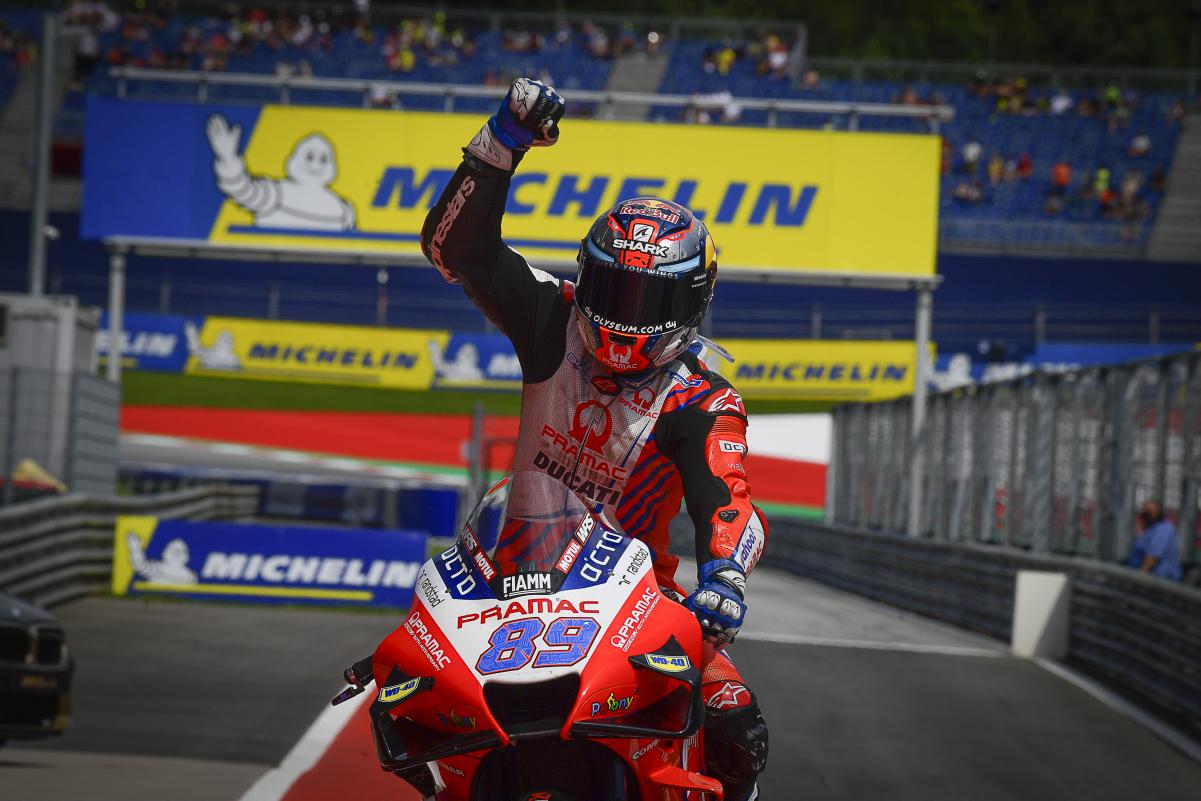 The initial start saw pole-sitter Jorge Martin stutter aboard his Pramac Ducati, which allowed Ducati’s Francesco Bagnaia to lead the MotoGP Styrian GP, while Suzuki’s Joan Mir popped up to third and eventually passed the Pramac rider for second.

Martin got back at him for second, as Mir then dropped to fourth in the next couple of laps. Yamaha’s Fabio Quartararo was the mover to third after initial struggle against Honda’s Marc Marquez and Yamaha’s Maverick Vinales in their fight.

Quartararo’s move on Rins unsettled him for a brief moment in the left-hander, which also caught out Marquez, who dropped behind Vinales in sixth. Replays showed that the Honda rider made an aggressive Turn 1 move on Aprilia’s Aleix Espargaro.

It left the Aprilia rider a bit off as the red flag period showed the two talking on track. The MotoGP Styrian GP was red-flagged for a high-side for KTM’s Dani Pedrosa at Turn 3 in dry conditions. It likely caught out Aprilia’s Lorenzo Savadori on the right-hand entry.

No replays were shown of Savadori collecting Pedrosa’s bike, but there was a huge fire due to the fuel leaking. The Italian had to be stretched out due to pain, while the Spaniard got back in the box unscathed, as work started to clear the bikes and the track.

Under red flag, Bagnaia led the MotoGP Styrian GP from Martin, Quartararo, Mir and Vinales in the Top 5. Behind them, Marquez held sixth from Pramac’s Johann Zarco, Suzuki’s Alex Rins, Espargaro and Ducati’s Jack Miller in the Top 10.

The LCR Honda pair of Alex Marquez and Takaaki Nakagami were 11th and 12th, with Tech 3 KTM’s Iker Lecuona in 13th, Honda’s Pol Espargaro 14th and KTM’s Miguel Oliveira in the Top 15, with the re-start to see 27 laps of racing in MotoGP Styrian GP.

The Race Direction noted of original grid spot start, which put Martin back on pole from Bagnaia and Quartararo for the new 27 laps MotoGP Styrian GP. Pedrosa took the start, while Savadori was cleared to start, but he couldn’t make it eventually.

Vinales, meanwhile, stalled on the second Warm-Up lap and was forced to start from the pitlane. The re-start saw Miller shot into the MotoGP Styrian GP lead from Martin and Mir, with Bagnaia dropping to outside the Top 10 after a slow start.

Quartararo was fourth from Zarco as A Marquez moved up to sixth from teammate Nakagami. Rins dropped to eighth with KTM’s Brad Binder in ninth from teammate Oliveira in the Top 10. There was another M Marquez and Espargaro run-in.

The latter was forced wide onto the run-off which dropped him back and on the next lap, Marquez went wide himself while trying to battle the Tech 3 rider. The Aprilia rider eventually had to retire with an issue, while the Honda rider struggled pretty much.

At the front, Miller started to lose steam, as Martin got back on him to lead the MotoGP Styrian GP, while Mir was second from Quartararo. The Australian hung on to fourth from Zarco, as Nakagami cleared teammate Marquez to be sixth.

Rins was seventh after clearing Binder, as an injured Oliveira was 10th from M Marquez, while Bagnaia was 12th from Avintia Ducati’s Enea Bastianini, Pedrosa and Lecuona in the Top 15. It was heartbreak for Vinales, though, who remained at the back.

A retirement fro Oliveira and a Long Gap Penalty for Bastianini, helped Honda’s Pol Esparagro and Petronas SRT’s Valentino Rossi make it into the Top 15. Amid warnings and penalties, the fight for podium was on between Quartararo and Miller.

The Australian chased him all around, but did a bit too much to slip out onto the gravel and end his race. This helped Zarco to fourth from Nakagami, with Rins climbing up to sixth from Binder, as M Marquez was up to eighth ahead of his brother Alex.

After an early drop, Bagnaia started to show true pace in 10th from Pedrosa and Lecuona. At the front, it was enough work from Martin to register his first-ever MotoGP win in Styrian GP despite the push from Mir, as Quartarato round out the podium places.

The last two laps was a show from Binder, who cleared both Zarco and Nakagami to fourth, while the Japanese rider managed to clear the Frenchman for fifth. Rins was seventh from Marquez, as Bagnaia cleared A Marquez to ninth, while Pedrosa was 11th.

Despite the Long Gap Penalty, Bastianini fought back to 12th from Rossi, Avintia’s Luca Marini and Lecuona in the Top 15. Post-race, Bagnaia was handed a 3s penalty for not taking his penalty, which dropped him to 11th in the order.

It promoted A Marquez to ninth and Pedrosa to 10th. Outside the points, P Espargaro was 17th from Petronas SRT’s Cal Crutchlow, Tech 3’s Danilo Petrucci and Vinales. DNF: Miller, Oliveira, A Espargaro, Savadori.