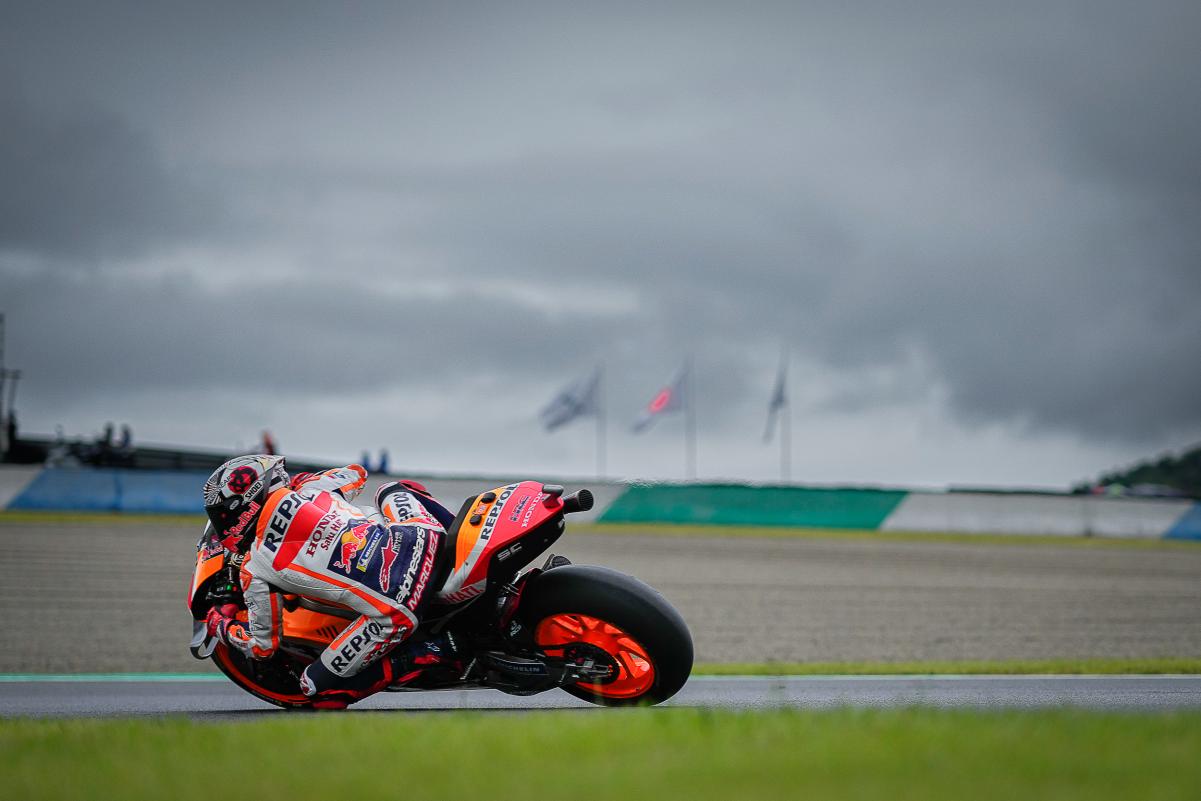 The first part of MotoGP qualifying in Japanese GP at Twin Ring Motegi was delayed due to track conditions after wet weather situation. The FP3 session was cancelled with the organisers focusing on qualifying rather than the practice session.

The track was quite wet still at the time of the first part in qualifying as LCR Honda’s Takaaki Nakagami had a minor crash early in the session. He managed to continue on, with RNF Yamaha’s Darryn Binder crashing out later but he continued on as well.

With no pit stops due to the weather conditions, the Pramac Ducati pair led the way from mid-way in the session. It was Johann Zarco who with a 1m55.300s lap made it into Q2 from teammate Jorge Martin as VR46’s Ducati’s Marco Bezzecchi missed out in third.

He is to start from 13th from Yamaha’s Franco Morbidelli, as MotoGP title contender Enea Bastianini did not have a good run to be 15th. The Italian had a late crash which further hurt his chances, with teammate Fabio di Giannantonio in 16th.

LCR’s Alex Marquez was 17th from Suzuki’s Alex Rins from Honda wildcard Tetsuta Nagashima who did well to be inside Top 20, where Tech 3 KTM’s Remy Gardner was 20th. Suzuki wildcard Takuya Tsuda also did well to be 21st.

He was followed by Tech 3’s Raul Fernandez, whose session also ended with a crash. RNF’s Cal Crutchlow was 23rd from teammate Binder as LCR’s Nakagami was 25th.

The second part in MotoGP qualifying in Japanese GP saw Honda’s Marc Marquz set the pace in wet conditions with no stops in between for the riders. Ducati’s Francesco Bagnaia had a wild moment on one of his laps as KTM’s Miguel Oliveira had a crash.

He continued on, as Marquez continued to set the pace. The Spaniard eventually took MotoGP pole upon his return in Japanese GP with a 1m55.214s lap with Pramac’s Zarco doing well in Q2 after topping Q1 to be second from KTM’s Brad Binder.

The South African snatched the front row from Aprilia’s Maverick Vinales after a late lap, with Martin also doing well to be fifth from Q2. Aprilia’s Aleix Espargaro was sixth – the lead rider among the MotoGP title contenders – with Ducati’s Jack Miller in seventh.

KTM’s Oliveira ending eighth from Yamaha’s Fabio Quartararo, who only managed ninth as his MotoGP title rival Bagnaia was 12th behind VR46’s Luca Marini and Honda’s Pol Espargaro in 10th and 11th.