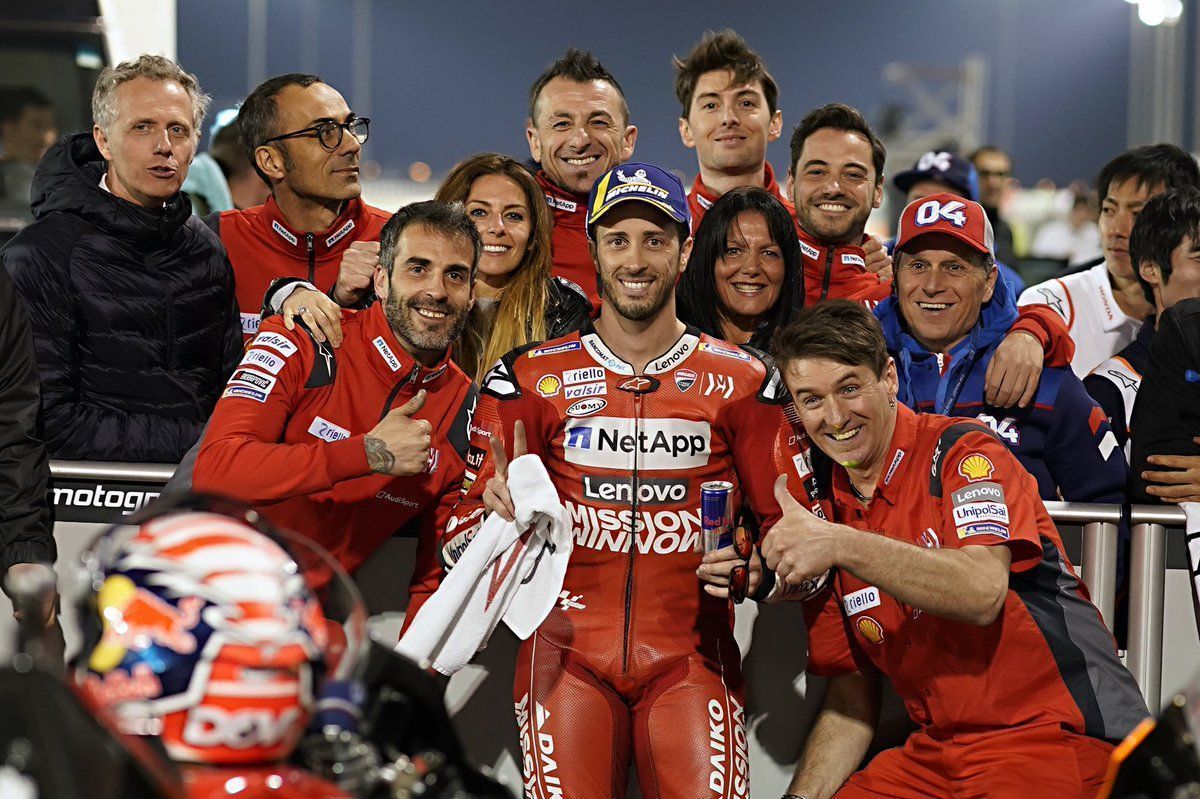 It was a bad start from pole-sitter Yamaha’s Maverick Vinales again as he dropped to the fag end of the Top 10 as Ducati’s Dovizioso took the lead in Qatar MotoGP race from Pramac Ducati’s Jack Miller and Honda’s Marquez.

Marquez fought back to take second from Miller as the Australian dropped out of the Top 10 due to a bizarre incident where his bike’s seat came lose and he threw away in the middle of the circuit as the Suzuki riders started to claw in the race.

Dovizioso led Marquez and LCR Honda’s Cal Crutchlow with Suzuki’s Alex Rins and Joan Mir right on their tail. Behind them, it was for a recovery ride from Ducati’s Danilo Petrucci along with Vinales and his teammate Valentino Rossi.

Meanwhile, at the front, in no time Rins shot into the lead as he took on Dovizioso and Marquez. The trio had a squabble for the lead for few laps before Dovizioso settled back in the lead from Marquez with as many as six riders in the lead group.

As the race progressed towards the finish, Dovizioso started to preserve his tyres which allowed the group to stay with the Italian. While Dovizioso headed the pack, Marquez and Rins went back and forth for second with Rins winning the fight initially.

But Marquez fought back to take second with Rins then losing out to Crutchlow for third when he went wide in Turn 1. At the same time, Rossi gained places on Vinales, Mir and Petrucci to move into fifth from 14th on the grid.

Just when it looked settled at the front, a rare mistake from Dovizioso allowed Marquez to take the lead with two laps remaining but the Italian fought back on the main straight with the Ducati power to retake the lead on the final lap at Losail.

Marquez tried hard going wheel-to-wheel with Dovizioso with both going wide on the final part of the track but the Ducati rider just had enough to score 2019 MotoGP season’s first win with Marquez having to settle for second, only 0.023s apart.

Crutchlow put in a superb show to complete the podium for his first race since Motegi 2018 as he fended off Rins and Rossi in the end with the Top 5 covered by 0.600s. After looking good earlier in the race, Petrucci was sixth with Vinales only seventh.

Having done well in the early stages like Petrucci, Suzuki’s Mir lost steam by the end to still finish eighth with LCR Honda’s Takaaki Nakagami in ninth and Aprili’s Aleix Espargaro in 10th from Petronas Yamaha SRT’s Franco Morbidelli.

Among late changes, KTM’s Pol Espargaro was 12th with Honda’s Jorge Lorenzo also recovering from a bad start to score some valuable points in 13th ahead of Aprilia’s Andrea Iannone and KTM’s Johann Zarco in the Top 15.

After stalling on the formation lap, Petronas Yamaha SRT’s Fabio Quartararo fought back to 16th with the Frenchman looking ever close to score a point. Tech 3 KTM’s Miguel Oliveira ended up 17th from Avintia Ducati’s Karel Abraham and Tito Rabat.

Tech 3 KTM’s Hafizh Syahrin rounded out the 20 finishers in Qatar MotoGP race after a late crash for Aprilia’s Bradley Smith and the early retirement of Pramac pair of Miller and Francesco Bagnaia.