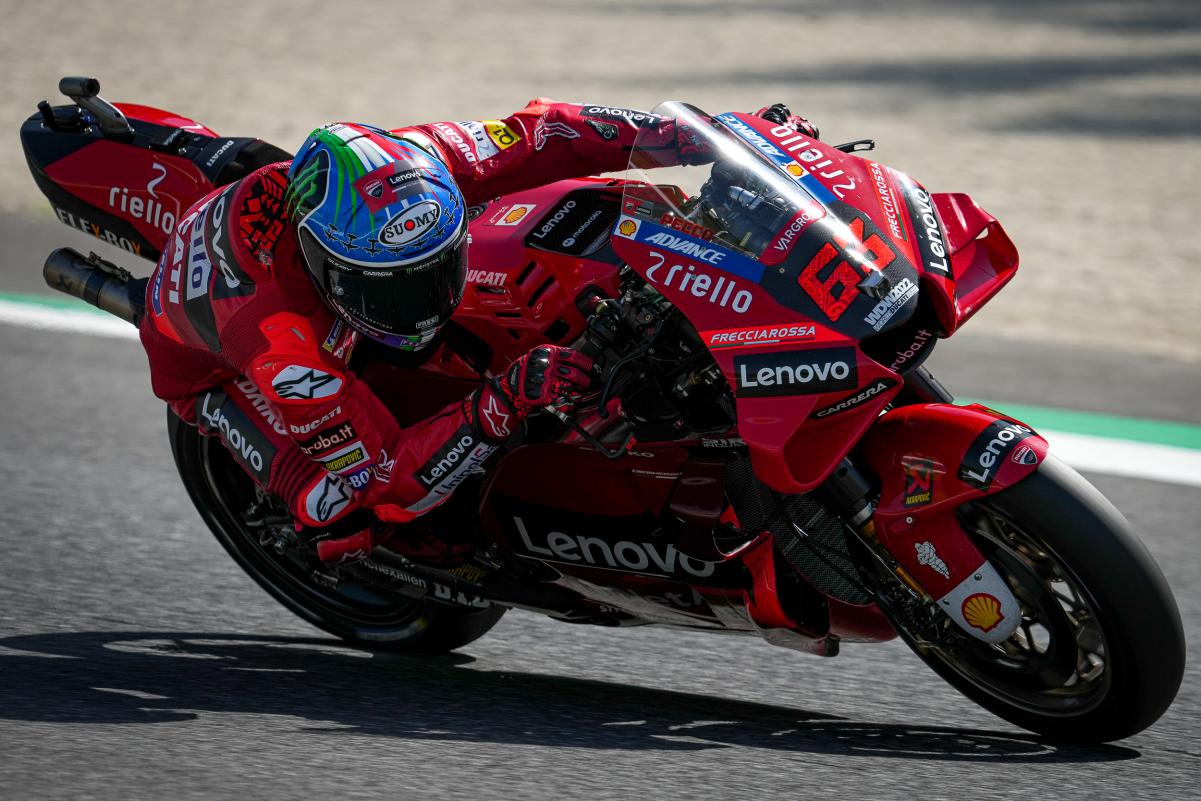 Pole-sitter Fabio di Giannantonio made a good start in MotoGP Italian GP abode his Gresini Ducati but the VR46 Ducati pair of Luca Marini and Marco Bezzecchi got ahead of him by the end of the lap to lead the grand prix from the Italian.

Marini was ahead initially but Bezzecchi cleared him for the lead, as di Giannantonio stood third from Aprilia’s Aleix Espargaro, Yamaha’s Fabio Quartararo in the Top 5. Pramac Ducati’s Johann Zarco was sixth from KTM’s Brad Binder who moved into the Top 10.

Ducati’s Francesco Bagnaia was eighth from LCR Honda’s Takaaki Nakagami and Honda’s Marc Marquez in the Top 10. It was a hectic grand prix up ahead as Bezzecchi continued to lead the way for long. The positions behind him changed multiple times.

Marini came under pressure from Quartararo after he passed Espargaro. They were joined in by Bagnaia who made his way up to fifth from eighth. As Quartararo had a back and forth with Marini, Bagnaia passed Espargaro to join them in the fight for second.

In fact, he not only passed Marini but also Quartararo to be second. The Frenchman was left to fight the VR46 rider with Espargaro tucked behind them. Zarco was sixth and fighting a recovering Gresini of Enea Bastianini by midway with Binder in eighth.

His KTM teammate Miguel Oliveira also made his way into ninth as di Giannantonio dropped back to 10th. Marquez was 11th from Nakagami, with LCR teammate Alex Marquez in 13th, Pramac’s Jorge Martin in 14th and Ducati’s Jack Miller in Top 15.

Honda’s Pol Espargaro, meanwhile, crashed out with Suzuki pair of Joan Mir and Alex Rins also crashing to retire. Up front, Bagnaia passed Bezzecchi to lead the Italian MotoGP race as Quartararo cleared them to be second with Marini re-passing teammate for third.

Bezzecchi re-passed him for third as Marini fended off Espargaro for fourth, with Zarco in sixth. He was being chased by Bastianini for sixth but he crashed out at Turn 4, allowing Binder to be seventh with Oliveira in eighth, di Giannantonio ninth and Nakagami 10th.

Despite the chase from Quartararo, Bagnaia had enough to secure a MotoGP win in Italian GP at Mugello, with Espargaro securing another podium finish to keep himself in the title fight. A late move from Zarco helped him to be fourth from the VR46 pair.

Bezzecchi was fifth from Marini, with Binder in seventh as Nakagami cleared Oliveira for eighth, where Marquez rounded out the Top 10. Di Giannantonio ended up 11th from pole as Aprilia’s Maverick Vinales put in a late charge to be 12th.

Martin was 13th from Marquez and Miller in the Top 15 points position. RNF Yamaha’s Darryn Binder was 16th despite the Long Gap Penalty, as Yamaha’s Franco Morbidelli was 17th from Ducati wildcard entrant Michele Pirro.