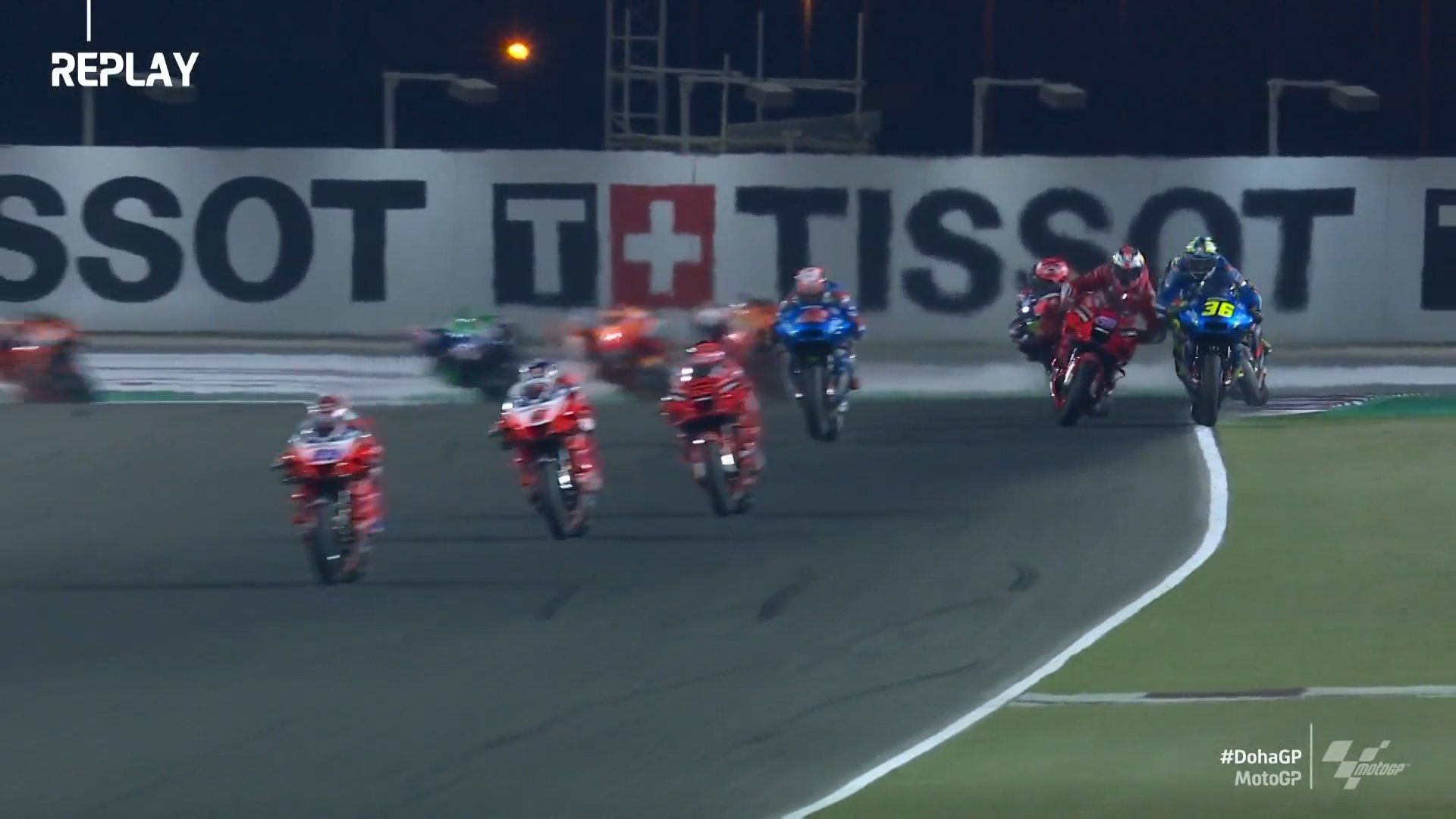 Joan Mir was naturally unhappy with how Doha MotoGP panned out, especially with the clash, as Jack Miller takes a 50-50 approach to it.

While the first MotoGP race in Qatar didn’t have so many fights, the second one provided all the dramas, with the one to be talked upon for at least the coming weeks. Suzuki’s Mir and Ducati’s Miller had multiple moments in the grand prix, which left a bad taste.

The first happened with Mir tried to sneak in a cheeky move on the inside at a right-hander, where he eventually touched Miller. The Spaniard kept the position as the Australian shook-up a bit. He didn’t stay quiet, though, as he immediately fought back.

Coming into the final corner, Mir ran slightly wide onto the kerb, when Miller came alongside him and the two touched again – this time while upright. They had a small exchange on the main straight, as the MotoGP race continued on.

While Miller managed to get ahead, Mir started to drop down, as the FIM cleared either from any penalty. By the end, roles reversed, as the Australian dropped down the order on the final lap to be ninth, with the Spaniard ending up seventh.

They were at it post-race too, where replays showed Mir and Miller talking on their way back into the pits. Naturally, both were unhappy, with how things panned out, where the Suzuki rider put up an ‘intentional’ hit tag on the Ducati man.

“What happened with Jack in Turn 10 is that it was the only place I could overtake,” said Mir to media including MotoGP. “I took the right position. He decided to stay on the outside. He maintained his line. We touched a bit. I picked up the bike. I understand it was a risky manoeuvre, but it was not over the limits. It was OK.

“Then I moved the leg to apologise because when something like this happened in a race I like to apologise, I like to avoid it. Then I was wide in the last corner. When I came wide, I saw jack. He moved his head like he saw me. I went to the kerb, on the outside of the line as much as I could. He just came across over me and we both touched.

“We almost crashed on the straight. It was super risky, super dangerous. That’s it. I think it was intentional. For sure it has to be investigated. These manoeuvres are over the limit. If it was intentional like I said, he deserves a penalty. If not, no. But I think he moved the head to look at me.

“If you have time, compare the images of Aleix and myself to the images of Jack Miller and myself. Aleix Espargaro went wide at the last turn. He saw that I was coming. He moved a little bit to the outside. I saw him also. I didn’t come to hit him. I just respect the rivals. I think Jack didn’t show respect in this case.

“It was the same manoeuvre but with different riders. You can judge. For my team, the manoeuvre of Jack was not the best one,” summed an upset Mir. While Suzuki thought about appealing, they pulled out of it, after careful discussions.

The matter, though, will remain hot until they get to Portugal and could be discussed by the MotoGP riders. While Mir had his side of story shared, Miller, rather took a 50-50 approach and stayed away from making a controversial statement, after a difficult result.

“So, ninth again in Qatar, same as last weekend and a bit closer to the front, but not the same race here for me this weekend,” said Miller. “Kinda crazy that I was just over five seconds off the win and back where I was, but that’s MotoGP these days, and also what happens when you spend this long in one circuit after testing and the first race.

“But that’s not what you all want to hear about, is it? Anyway, let’s get to lap 13. I’ve just done the fastest lap of anyone on the lap before and I’m sitting in fifth, and then I get together with Mir twice on the same lap. Before that, there were a few contacts but it was just the way the race was going, a bit of contact here and there.

“Nobody seems really concerned where anyone else is on track, so. Back to Mir; it was one of those things where we both saw what happened, we continued to race after that so I don’t have too much more to say on that side of things. I got hit three times already before, I think, so it seemed to be that was the way we were going racing. That’s all.

“As for a black flag as the incident was being investigated – well, if I was getting black-flagged then something must have gone wrong, and race direction eventually called it a racing incident. I didn’t speak to Mir about it after the race – he looked at me after the race on the slow-down lap and I looked at him, we waved at each other bit, and I said that was how the race was going, more or less. Other than that, we didn’t speak. So it is what it is.

“I was able to push after the Mir incident, let’s call it, and I could close the gap but I started to suffer with arm pump on the right-hand side, and in the last four laps I couldn’t even feel the brake lever. I don’t want to ride like that, I felt able to push in every other aspect until the end so I need to do something about it.

“I had the arm pump a bit last week too but it was worse this time, so we need to understand why and get something sorted this week. Surgery could be an option which we would need to get done ASAP if that’s the case. I definitely don’t want another end to a race like that so we’ll investigate what I can do once we get back to Europe.

“I didn’t have much to fight with in the last two laps especially and I went from seventh to ninth in the last few corners with Mir and Binder passing me. So, ninth again,” summed up Miller, who is set for a work on his arm, as he noted above.

Here’s the video of Joan Mir and Jack Miller on main straight: https://www.motogp.com/en/videos/2021/04/05/relive-that-miller-and-mir-battle-from-the-doha-gp-in-full/367600

Here’s how Doha MotoGP panned out