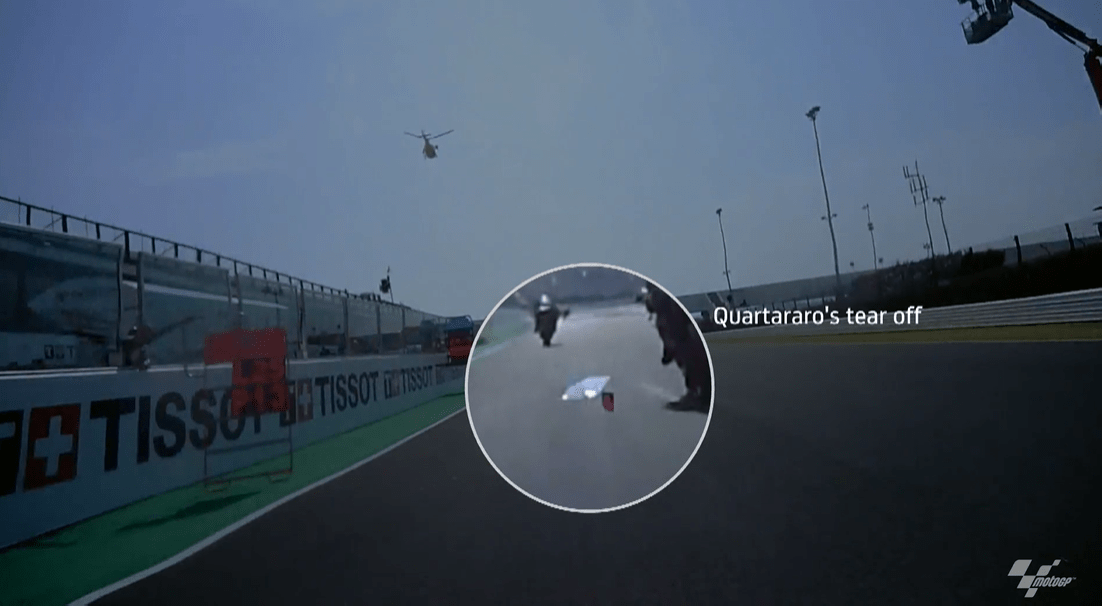 Jack Miller had tear-off to retire from MotoGP Emilia Romagna GP as Francesco Bagnaia has no clue of the crash, while Fabio Quartararo says he got no warning.

It was looking like a double podium for Pramac Ducati in MotoGP Emilia Romagna GP at Misano until the retirement for Miller and crash for Bagnaia. For the Australian, it was a strange moment as he suddenly dropped places after losing a podium.

Post-race, it was revealed that a tear-off from Petronas SRT’s Quartararo flew into his engine and got stuck. The moment was captured in video too – although not shown on the world feed. The incident took place at the start/finish straight.

“I’am very sad because I had started well and we could have had a good race, we had all the right conditions to make it,” said Miller. “Unfortunately it was nobody’s fault, it was a very unlucky day because a tear-off entered the air box.”

While Miller was just outside the podium at that time, teammate Bagnaia lost the MotoGP race from the lead in a strange fall, which he says came with no warning. “The first thing when I crashed was I really wanted my bike to come to the box soon to see what happened, because it was too strange the crash,” he said to TV media.

“So, it looks like I have touched something like a tearoff or a dirty thing on track. The only thing I can think is this, because if it’s not something like this I’m a little bit scared for the next races because crashed like this without any advice from the lap before is [worrying].”

Joining the disappointment list was Quartararo, whose tear-off hampered Miller. The Frenchman was handed a Long Gap Penalty – converted to 3-second time penalty – for track limits at Turn 16. Apparently, he was warned thrice for it during the race.

The message was shown on world feed but Quartararo said, he did not get it on his dashboard, which is why he thought he was fine. Having got the penalty, he was livid as he stormed into his garage as he ended up fourth and lose the chance to reclaim points lead.

“First of all I’m really happy about my race, because I think that it’s important after all the weekends that we struggled in, to finally finish in third position,” said Quartararo. “Ok, at the end we got that penalty for track limits but my thoughts from this penalty is that I should receive a message, like they put on TV, that I have a track limits warning.

“But actually, I received no message. So I was a bit surprised to suddenly have track limits. It’s true that I had three track limits but the last two I didn’t know, so for me it was necessary for me to receive a message from race direction.”