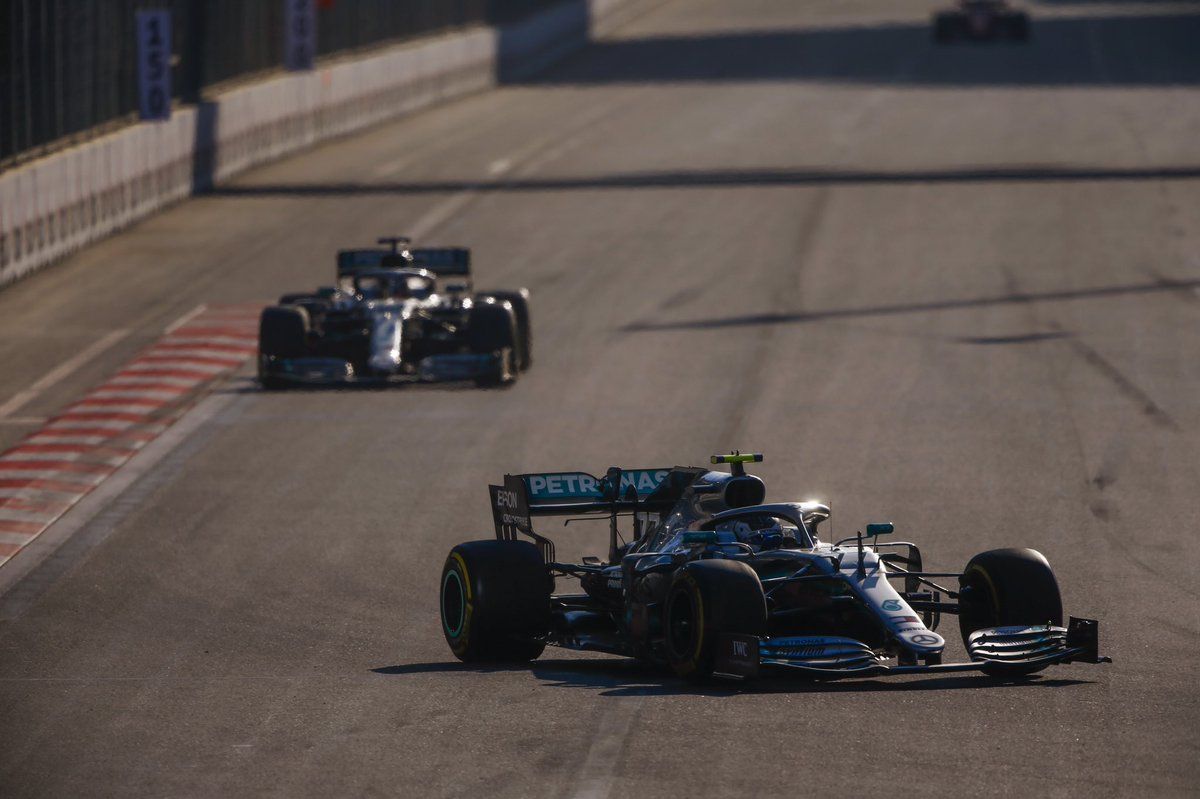 Mercedes reveals that the team discussed the ‘risky’ dummy plan they executed in F1 Azerbaijan GP’s Q3 session after seeing rivals’ tactics, while it also explains what went wrong with Lewis Hamilton at VSC re-start.

Even during the grand prix weekend, Mercedes admitted to being a bit agitated with their rivals, who would wait for Mercedes in Q3 to get a tow to set the quickest lap time. The same happened in China where many eventually couldn’t make it on time.

With the issue persisting on, Mercedes got together and discussed a new way to throw off their rivals by attempting a dummy plan, where both the drivers would be stationery for few seconds on the left side at the exit of the pitlane before their final run in Q3.

The risk involved with this was Mercedes perhaps not making it to the flag to start their quick lap. However, the trick worked to perfection in Azerbaijan GP as they managed to confuse even Ferrari’s Sebastian Vettel, as they spoke in the press conference.

“Over the last few races you’ve been seeing what we would call almost a Mexican stand-off in the pit lane,” started Mercedes strategy director Jame Vowles in the usual post-race debrief. “Everyone has their engines fired up and everyone’s looking at each other.

“But who’s going to go first to go out on track? They will be the car that effectively leads others and creates the tow. In Shanghai you saw that we left very late and other cars weren’t even able to do their lap because they were so keen on getting the tow that the flag came before they started their lap.

“In Baku we were very conscious that this effect could well dictate whether we were on pole or not . What we decided to do, therefore, was to send our cars out a little bit earlier which would pull the whole train of cars behind us. That worked.

“And then do a practice start on the left-hand side, simply so that we did not end up at the front of the queue, because we felt the effect was so powerful. This was taking an enormous risk. We only crossed the line several seconds before the flag as a result of this.

“But in this situation it worked. We pulled over to the left-hand side, other cars came past, Vettel led the pack and didn’t have a tow on this particular occasion, allowing our cars to get into a nice position behind competitors and benefit both from a tow and a good track position.

“This sort of plan doesn’t go without quite a bit of discussion beforehand, especially with the driver,s to make sure they both understand, accept and agree the plan. Because for them it’s very different: You’re asking them to break up what is a normal routine of going out into qualifying three, a very high-pressure situation, and doing something different.

“We discussed it with the drivers in the morning, made sure that they completely understood what we may and may not do during qualifying, and again before they went out we briefed them so that they understood exactly what was required of them. And they did a fantastic job.”

In addition, Vowles also explained the early pit stop decision where it became evident that the soft compound wouldn’t last for long and the medium was the compound to be much better on the surface at that point of time in the grand prix.

Aside the usual topics, Vowles said Hamilton’s loss of time under the VSC was in fact a Mercedes issue rather than the driver, where efforts are being put in place now for the dashboard to have a better display of information in such situations.

“During the VSC at the end of the race, you will have seen Lewis lose a couple of seconds of race time relative to Valtteri, which could have been crucial for the win,” he said. “When the VSC ends, the driver gets a notification on his dash, and that’s something that we have the ability to control what’s displayed and what’s not.

“We asked Lewis to do a number of switch changes, which is normal, to put the car into a more performant mode. But with every change, he lost sight of what that delta time was. The other factor that was contributing here was that if you are in a straight line and the VSC ends, all you have to do is manage the throttle, get on the throttle and go straight.

“But Lewis wasn’t, he was in a braking zone for the VSC, one of the most difficult situations because now it’s very difficult to modulate where you are on the delta time and get ready for the VSC restart.

“A combination of all of that put together means that Lewis didn’t make a mistake. It’s where he was on track and a number of switch changes that just masked where he was in exact delta time and he lost around two seconds.

“We from our side can certainly do more work to make that better in terms of a dash display going forwards to Barcelona, and we will do. The luck of the draw as to where you are under the VSC, unfortunately, will always be the same way.”

Ross Brawn on Ferrari fighting back