Tom Sykes set the Pole Position, followed by Eugene Laverty and Marco Melandri. Reigning champion Jonathan Rea could not qualify higher than sixth. Lorenzo Savadori crashed in Superpole and broke a collarbone, so his weekend was over.

The lights went oun and the 2018 Superbike World Championship season began. Sykes held the lead and Laverty had a bad start and lost his second place to Melandri. But Rea started really well from second row and he was already in second place on the first corner. Xavi Forés did also a good start and moved up to fifth from seventh.

Wayne Maxwell, one of the ‘wildcards’, crashed in lap 2, the same lap in which Forés passed Laverty for fourth place. The Aprilia rider would also be overtaken by Chaz Davies’ Ducati, who was now on fifth position. Behind them, Michael van den Mark and Alex Lowes’ Yamahas were seventh and eighth, respectively.

Laps went one and the top three riders had clearly opened a gap to the rest of the field. There were already more than two second between Melandri and Forés. Behind them, both Yamahas had already overtaken Laverty and were catching Davies and Forés’s Ducatis. Van der Mark passed Davies on lap 12, but the Brit got his position back two laps later. Rookie rider Yonny Hernández crashed.

With 8 laps to go, Melandri started to attack Rea and eventually overtook him, which allowed Sykes to enlarge his gap to one second. The Yamahas started to fight between them, which made that Davies could pull away and caused some hard overtakes between teammates.

On the lead group, Melandri had left Rea behind and was catching Sykes. The Italian Ducati rider managed to take the lead on lap 19 and opened a small gap. Davies passed Forés and caught Rea, who had some kind of problem and was riding really slow.  Behind, Leon Camier and Laverty passed Van der Mark. Jordi Torres retired due to electrical issues.

On the penultimate lap, both Davies and Forés easily overtook Rea. The race ended up like that and Melandri won the first race of the year after displaying a better pace than the Kawasakis on the second half of the race. Sykes, who performed well and managed to defend from Pole, could do nothing to stop the Ducati and had to settle with second. Davies finished third after passing Forés and taking advantage from Rea’s problems. Forés, Rea, Lowes, Camier, Laverty, Van der Mark and Leandro Mercado complete the Top 10.

That brings the first Superbike race of the year to an end, the championship standings are now obviously determined by this race results, with Melandri on top. The next race will start tomorrow at 15:00 local time, 05:00 CET. 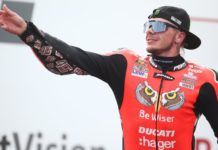 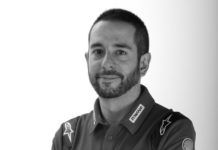 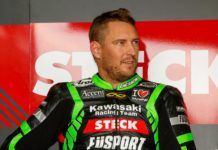