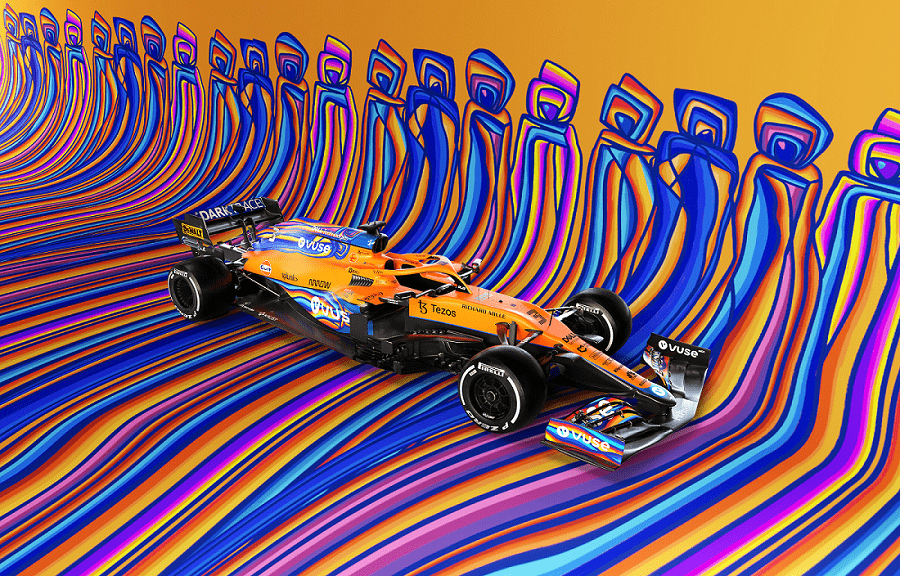 McLaren will run a special one-off livery for the F1 Abu Dhabi GP this weekend in partnership with Vuse of a design from an emerging talent in UAE.

McLaren has unveiled a special one-off livery which they will run during the Abu Dhbai GP this weekend in partnership with British American Tobacco’s brand Vuse. It is a design made by Egyptian female artist based in the UAE, Rabab Tantawy.

It is under Vuse’s ‘Drive by Change’ initiative which gives chance to emerging talents around the world. The McLaren MCL35M is an artwork where Tantawy worked in collaboration with automotive media designer Davide Virdis.

Daniel Ricciardo and Lando Norris will drive the new liveried car which features her distinctive Nubian Series in blend with the team’s papaya scheme. This is the second time for McLaren to run a special livery this year after their Gulf Oil livery in Monaco.

“We are excited to bring the art and motorsport worlds together in a ground-breaking way, by sporting Rabab Tantawy’s artwork on our race cars at the Abu Dhabi Grand Prix,” said McLaren CMO Claire Cronin. “Together with Vuse, Driven by Change is a unique opportunity to use our global stage to support rising talent, giving undiscovered creatives the platform they deserve. Rabab’s art is inspiring, and we are proud to take her papaya-influenced creation racing this weekend.”

At the same time, John Beasley, Group Head of Brand Building, BAT, added: “We have bold ambitions to shift the paradigm with our partnership with McLaren Racing by providing support and opportunities for talent as we further champion the diversity of people and skills in the creative world.

“Rabab has been an incredible talent to work with for the launch of the programme, with her passion for diversity and togetherness, and artistic skill set to transform the track in Abu Dhabi. We look forward to working with Rabab further as she helps us continue to influence change in not only motorsport, but the creative industry as a whole.”