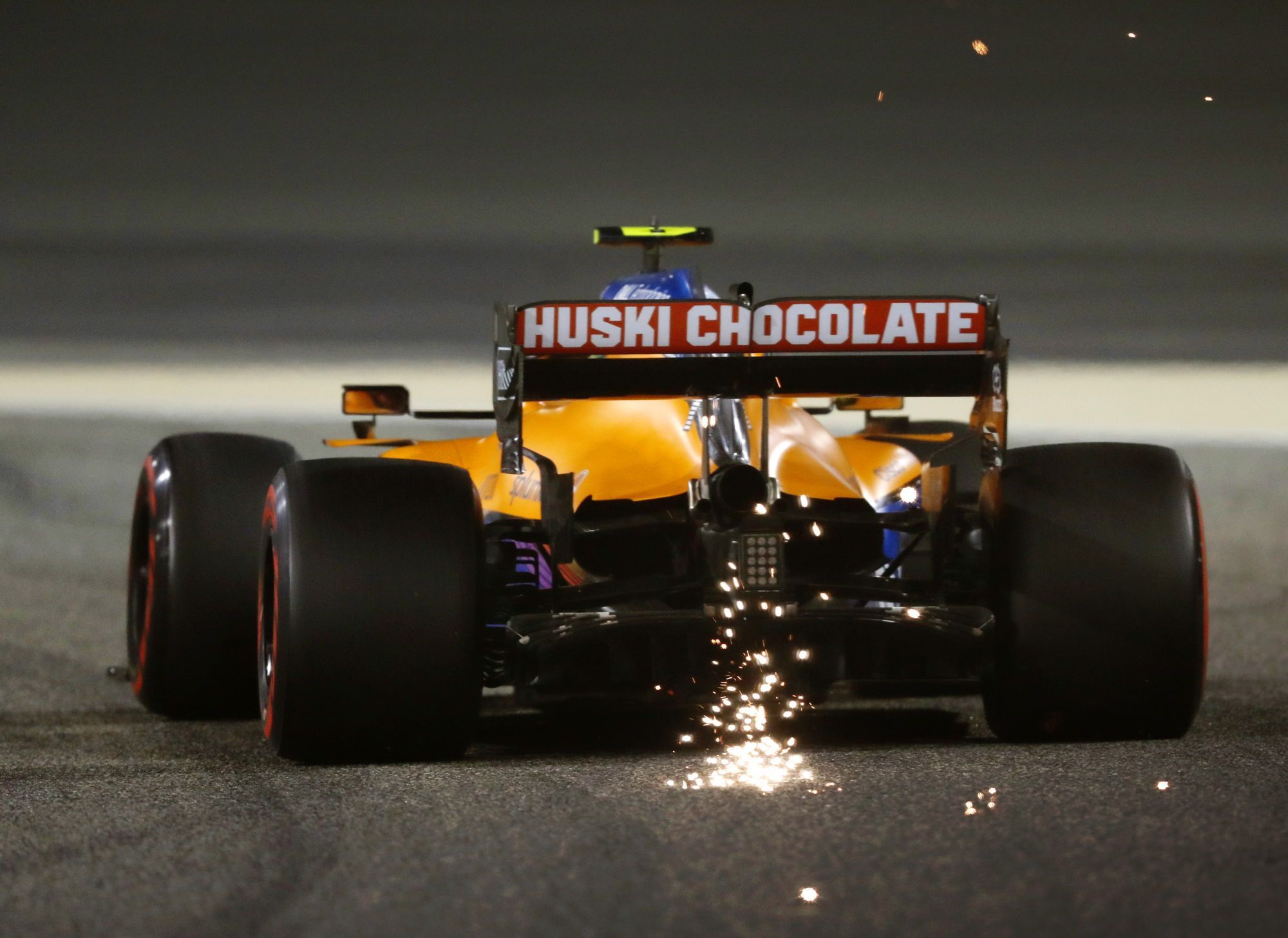 McLaren made an effort to conceal the diffuser of their 2021 F1 contender at its initial launch, not including detailed renderings of the region in their presentation. The British team later unveiled a unique diffuser concept at Bahrain test.

The test provided some insight into where F1 teams could possibly end up at the start of the season, the results of the tests, though unrepresentative, leading some to suggest that high-rake cars hold the advantage over low-rake cars in 2021, after a significant regulatory change limited floor design.

After the test, McLaren duo Key and Seidl shared their thoughts on the above, outlining an early pecking order, explaining their diffuser and the risk of copycat designs, and elaborating on the MCL35M’s rake philosophy, to media including FormulaRapida.net.

Here’s in a list format, the key saying from McLaren duo of Key and Seidl:

Key: “I think it’s a little bit early to say. I guess we’ve only just seen each other’s cars and how people are running them. I’d imagine the two different philosophies will join around something which ultimately works for the rakes. We’ve kind of been a high rake car but on the medium to lower end of that, certainly not extreme. I guess you could say that the regulations have had an impact on that. This is not something that’s unfamiliar to us in terms of the way a car with rake in it works.

“Whether that’s had a larger impact on cars with a slightly lower ride height is difficult to tell, it depends where you’re coming from. We’ve made modifications to a car which was typically quite raked, so it was based around a certain way that the aerodynamics were working on the back of the car and everything that’s upstream of that, had we been a team running a lower rear ride height like Mercedes for example the impact could have been different. It’s a bit difficult to tell really unless you’re there. But like I said I think things will begin to grow as the season goes on and we’ll begin to see trends emerging.

“As for the interesting developments, from my side I think we’ve seen developments coming on certain cars. The areas where these developments are to be found are most different and most increasingly detailed as the years have gone by. They revolve around the top of the floor. There we’ve lost the ability to use the edges of the floor to have certain devices as we had last year and of course the widths that we had before.

“There’s been several quite different solutions as to how you can treat the floor edge and the devices just on top of the floor. I think there’s a lot of interest in the fact that we know there’s plenty of development potential there as does everyone else. It’s early days of these regulations. Secondly the fact that there hasn’t been a single solution, there’s lots of different solutions out there which means that there’s a fairly large scope of development potential and areas. I think that’s what grabbed my attention most.”

Key: “I think it’s always nice for a team to come up with an idea which is unique. The credit goes fully to our aero department and the guys in the rear aero group for realising that there was an opportunity there to use the new regulations in such a way. Full credit to them and in that aspect , of course it’s nice to find something which is maybe a little bit unique to us. I suppose it’s one of the visible things which gets talked about a lot. Ultimately it’s just a bit of a much wider picture of a complex part of the back of the car. I’m sure it’ll be forgotten by the time we get back here in a couple of weeks’ time.”

On other teams employing the technique and how quick they can:

Key: “It is a normal design idea. I think we are a bit surprised that maybe we’re the only team with that. It’s just one feature of many on an area which changed for this year. I think the way Gary Anderson explained it was pretty spot on to be honest with you. You’ve got a certain regulation of a continuous surface in that area within the Y250 position, either side of the centreline of the car. Those little vortex generators down there which you see as well on pretty much every car now.

“These little aluminium or carbon parts are actually governed by de facto the same rule. So it’s fairly straightforward. You need the CAD screen to see it because you’re taking cross sections of a 3D surface, so it’s fair to question I suppose when it’s difficult to tell without that CAD data to prove it’s within the boxes it should be in and to prove it’s a continuous surface but that’s really all it is.

“Outboard of that it’s basically the same regulations but the diffuser fences just had to be 50mm shorter. Outboard of that region it has changed, inboard of that region you’ve got a bit of scope there to put the sort of surfaces on that we have put. As for other teams deploying it, I think the first port of call with any idea you see out there is CFD. I think you can jump on an idea that you spot on another team within a week easily nowadays. I guess if there’s still interest after a week, whether it’s our diffuser or Mercedes’ edge of floor detail or whatever it is, I think you can get a feel for things quite quick.

“Then it’s really understanding how it works with your car, that’s the key to this. You can then end up with a unique geometry of your own because you might understand the principle. Then you have to adapt it accordingly so that it works with your car. The diffuser situation for example is also very stable in that environment as well.

“So you’d probably therefore wind tunnel test it, which might be a week or two down the line and then you’ve got to manufacture it and these particular steps are pretty straightforward, so you could say between I suppose three and five weeks between taking the picture and putting it on the car if you really wanted to push this through.”

On the risk of another team copying their designs:

Key: “Well you can’t copy nowadays You have to understand the principles and go from the ground up. I think things become a must have when they’re extremely powerful. Every team developed some sort of blown diffuser, or an F-duct or a double diffuser. The regulations are much more constrained nowadays. I think if there’s a very clear direction which not only is immediately reasonably powerful but provides a lot of potential for development then naturally you would pursue it even within the cost cap.

“We’ve all worked hard to hang onto development budgets even this year and it’s absolutely essential next year with the new regs. I think that there’s lots of different solutions out there that suggests the particular area I mentioned is still very raw. It’s still very fresh and new.

“Undoubtedly there will be clever ideas out there that we see on others as others will perhaps see on our car that you will pick up on and you think ‘actually that looks compatible with what we understand’. The good thing with these areas is they’re not big bits. It’s not a massive project if you wanted to make a floor edge detail change, it’s all doable within the cost cap and sensible time scales.”

Key: “From my side I think you don’t really know until you go into the first qualifying session of the year until you know where everyone is. I think over the years you begin to realise that that is the case. It is very difficult to predict. We’ve got tyre spec, engine modes, state of the track at the time the lap was set, the spec of the car, there’s so many different variables and they all can count for pretty big chunks of lap time. I think for us the fact that you’re watching what others are doing is natural.

“For us it’s really been a case of looking at ourselves, making sure that we were comfortable with the steps that we were making during the test, ticking those boxes. As  I mentioned earlier, making sure the reliability of the engine installation was critical for us and Mercedes and so on. I think a good test for us this year has been to get through those three days and making sure that mechanically we’re sound and we’ve understood the car reasonably well. It hasn’t been a bad test, but exactly where everyone is…. is of course very difficult to say.”

Seidl: “I think it’s difficult to know exactly the pecking order but from everything we’ve seen so far we can expect an incredibly tight battle again between the usual suspects. I think we will be again in the same fight as we have been last year. As James said also from my point of view it was simply important to use the time here in Bahrain and to find the right balance between covering test items and doing good mileage. Understand the car, to be in a favorable position when we go to Bahrain in two weeks to extract the maximum performance from the package we have.

“It was important to see that we are actually on top of reliability and last but not least: It was also important to go through the race team again with all the race weekend specific procedures. We shouldn’t forget that we also have a new partner with Mercedes. We have to go through a lot of things first time under real pressure in two weeks. Going through qualifying, going through a race is challenging because it’s a complex topic to operate these modern power units together with the team in these situations.

“I’m really happy I have to say how this last month went  and with everything the team has done and with all the energy everyone has put in. To come here in Bahrain with a new power unit, with a new car after also some big changes in the aero regulations, how we pulled it off as a team is encouraging. At the same time we will only assess in qualifying in Bahrain where we are.

“I think we will see definitely a close fight again between us, Aston Martin, Alpine, Ferrari. Red Bull as well will be in the fight, AlphaTauri looked very strong as well. And with everything we could see so far, again we need to wait until the first race weekend, I think everything is very close together again. It was great for us to finish P3 last year but at the same time we haven’t forgotten about the last race where we could also have easily ended up in P5. That’s where we see us, in that battle.”