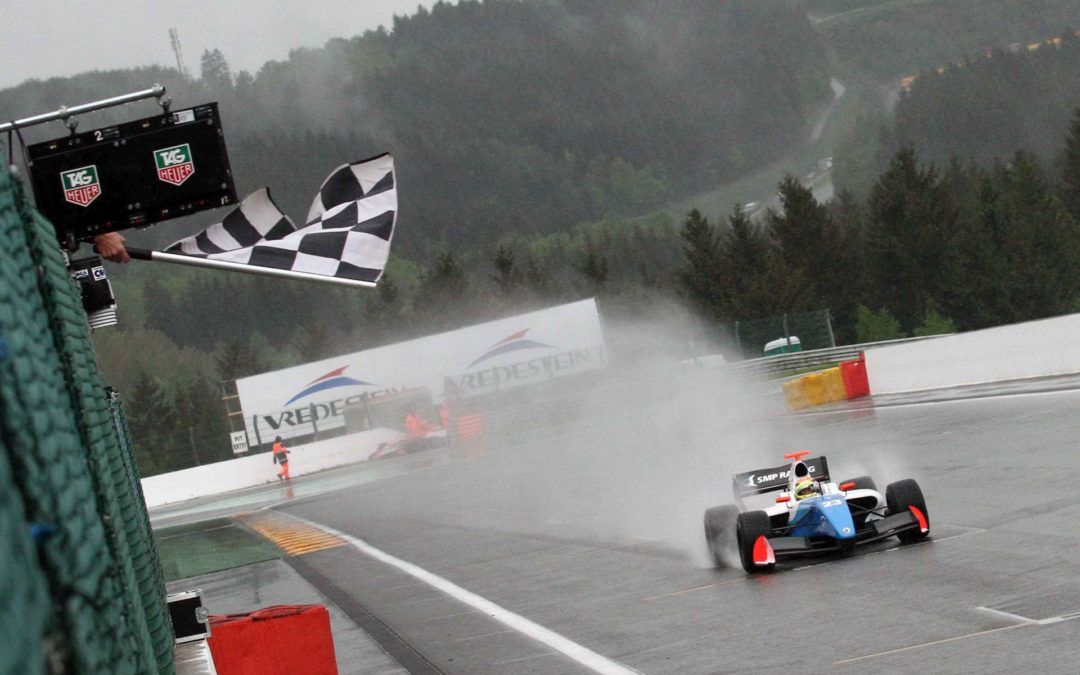 The start of the race was given behind the safety-car due to the excessive precipitations – Race control opted for the safest possible approach. In an early surprise, Louis Delétraz (Fortec Motorsports) got stuck on the grid. The re-start was given on lap 4 with Vitor Baptista (RP Motorsport) going wide at La Source while Dillmann led Roy Nissany (Lotus), Aurélien Panis (Arden Motorsport), Vaxiviere, Celis Jr and René Binder (Lotus).

On lap 5, Panis tried to go for second place on Nissany at Les Combes, but lost braking point and had to yield to the Israeli driver. On lap 6, the pit window opened with Celis, Matevos Isaakyan (SMP Racing), Egor Orudzhev (Arden Motorsport) and Giuseppe Cipriani (Durango) as the early takers.

In the meantime, Dillmann, Nissany, Vaxiviere and Pietro Fittipaldi (Fortec Motorsports) all completed their pit-stops while Panis led in front of Binder. With the safety-car on-track, a hard contact involved Johnny Cecotto (RP Motorsport), who hit Nissany from behind at Raidillon. Both drivers were forced to retire.

The race went back underway on lap 11, with Panis forced to make his pit-stop like Binder and Yu Kanamaru (Teo Martin Motorsport). Dillmann cruised back to the lead in front of Vaxiviere, but the championship leader ended up spinning at Les Combes, settling for the runner-up position.

Vaxiviere is the sixth different winner in the first three rounds held by the Formula V8 3.5 series this season. With his second place, Dillmann held onto the championship lead while his Mexican team-mate, part of the Force India Formula 1 program, delivered a really consistent performance. In fourth place, Baptista captured his first rookie win. The next round for the 2016 championship will be on the 25th and 26th of June at Circuit Paul Ricard in Le Castellet.

“It was a tough race, and we managed it quite well without making mistakes. We had a good strategy and I’m happy because we finally got the victory. This morning I experienced some clutch issues but now I’m happy for the win and we are already focused on Paul Ricard for more success”.

“I think we were pretty fast at the beginning of the race when it was not so wet, we had a good call in the pits but I did not have enough speed on the straight, I couldn’t go flat out, but it’s ok. Another podium, more points and we are still leading both championships”.

“I have been fighting for this since the beginning of the season, but for many reasons we couldn’t catch this result. I think that after the hard work made by the team in these two years, also behind the scenes, this is a well-deserved result. I’m pleased of the result especially because it came with the rain. I put everything together without making mistakes. I hope this day will be the start of a better rest of the season”.

“It was a tough race, with the drivers having a difficult time keeping the cars on-track. At one point, I thought it was better to put a red flag as drivers where complaining a lot about how tough it was. In the end, it has been a good choice to restart, we had an exciting race, but it was a shame for us because Tom lost the lead. On the other hand, we have been lucky to keep at least second place. I’m really really happy for Alfonso, he kept a good pace on the wet to score his first podium finish and I hope he could gain more positions in the standings from the next races”.