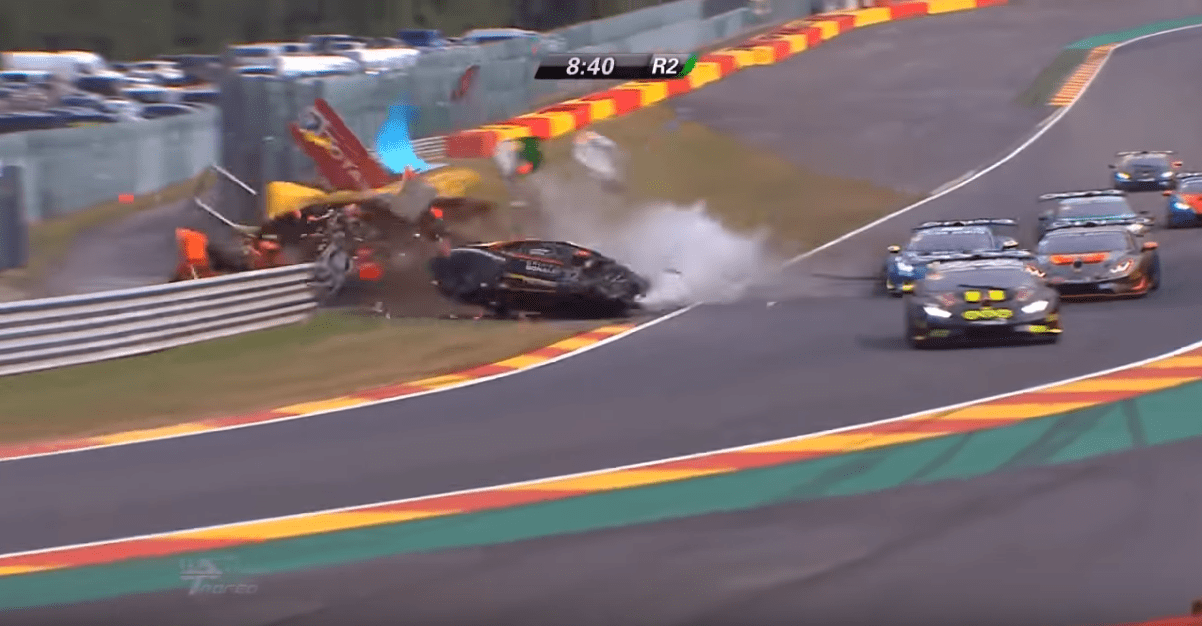 The Race 2 in the one-make Lamborghini Super Trofeo series at Spa-Francorchamps saw a major crash where a driver hit the marshal post, injuring himself and also the marshals on Saturday.

The crash took place with under nine minutes remaining in the second race of the Spa-Francorchamps weekend when the race leading #32 Lamborghini Huracan driver Fredrik Blomstedt was sent into the marshal post.

While battling for track position amid heavy traffic, the #92 Lamborghini Huracan of Luca Mauron tapped the side of Blomstedt, which was enough for the Swede to veer onto the grass between Pouhon and Fagnes to hit the barrier and the #12 marshal’s post.

It was revealed that there were four marshals present at the spot when the car came towards it. While three of them managed to move away enough for minor injuries, but one of them couldn’t and needed to be hospitalised.

The driver was also taken to the hospital but the statement from the SRO confirmed that there was no life-threatening injuries to either of them. The race wasn’t re-started with the pair of Blomstedt and Patrick Kujala still winning on the lap count back under red flag.

The statement read: “This morning, during the Lamborghini Super Trofeo support race ahead of the Total 24 Hours of Spa, a vehicle left the track at marshal post 12. Four marshals and one driver were injured in the incident.

“All were immediately attended by the circuit medical staff. One marshal and the driver have been transferred to hospital for medical checks. However, their injuries are not life-threatening. Following a delay of 1 hour and 30 minutes, track activities have now resumed.

“SRO Motorsports Group, RACB and the Circuit of Spa-Francorchamps would like to thank all of those involved in the medical assistance that followed the incident. Furthermore, we would like to wish a speedy recovery to all of the marshals and the driver involved.”

[Note: The official channel of Lamborghini Super Trofeo pulled the livestream video. The above video has been posted by a fan. We wish to clarify that Formula Rapida has utmost respect for the injured marshals and the driver, we wish them speedy recovery.]