An amazing ride that we saw in Race 2 here at the Nurburgring.

Marciello starts well and maintains his position on the head, Rosenqvist missed the start and incredibly slips to 22nd place.

Mardenborough in the rear was forced to retire at the first curve for a contact.

Already on the 2nd lap Derani overtakes Sims and takes the 2nd place behind Marciello.

The ride up at 5th lap remains unchanged and the gap between Marciello and Derani went to 2.3 seconds.

The battle for 2nd place between Derani, Sims, and King comes on in the next laps.

But the real show is in the rear and offers it the 7th lap Rosenqvist that overtakes Van de Laar touching it lightly.

Already after 8 laps Rosenqvist is 15th.

On the 10th lap Marciello is always at the head of the race, but the battles are fought behind where Sven Muller and Alex Lynn comes on a beautiful battle for the 7th place.

The margin between Marciello and trackers becomes more consistent in the 12th round with a 5 seconds gap over his pursuers.

On the 13th lap contact between Lucas Wolf and Roy Nissany after a spun from the Mucke Motorsport driver lets entered Safety Car in the track.

The race resumed on lap 16 with the green flags and safety car went out.

Also on the 16th lap Sandro Zeller has a problem with the front left tire and must stop at the pits.

On the 17th lap a fantastic Serralles overtakes Serralles Alex Lynn took him to 8th place.

The battle is on and Serralles going wrong on earth, but only raises dust without causing any loss of positions.

Rosenqvist is showing all his value today and overtakes Gilbert at the 19th lap and taking the 13th position.

On the 20th lap Lewis overtakes Ticknell, but already the 21st lap in danger of losing the position going slightly off.

Meanwhile Lynn has passed again Serralles, but the battle is still on. Lynn manages to keep his place.

At 24th lap Rosenqvist became, before the 10th, and then the 9th position thus returning in the points, despite the bad start and scoring 2 points as well.

For Derani is the best race of the season. 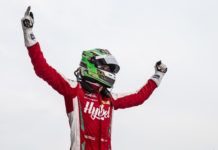 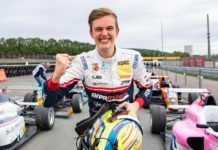