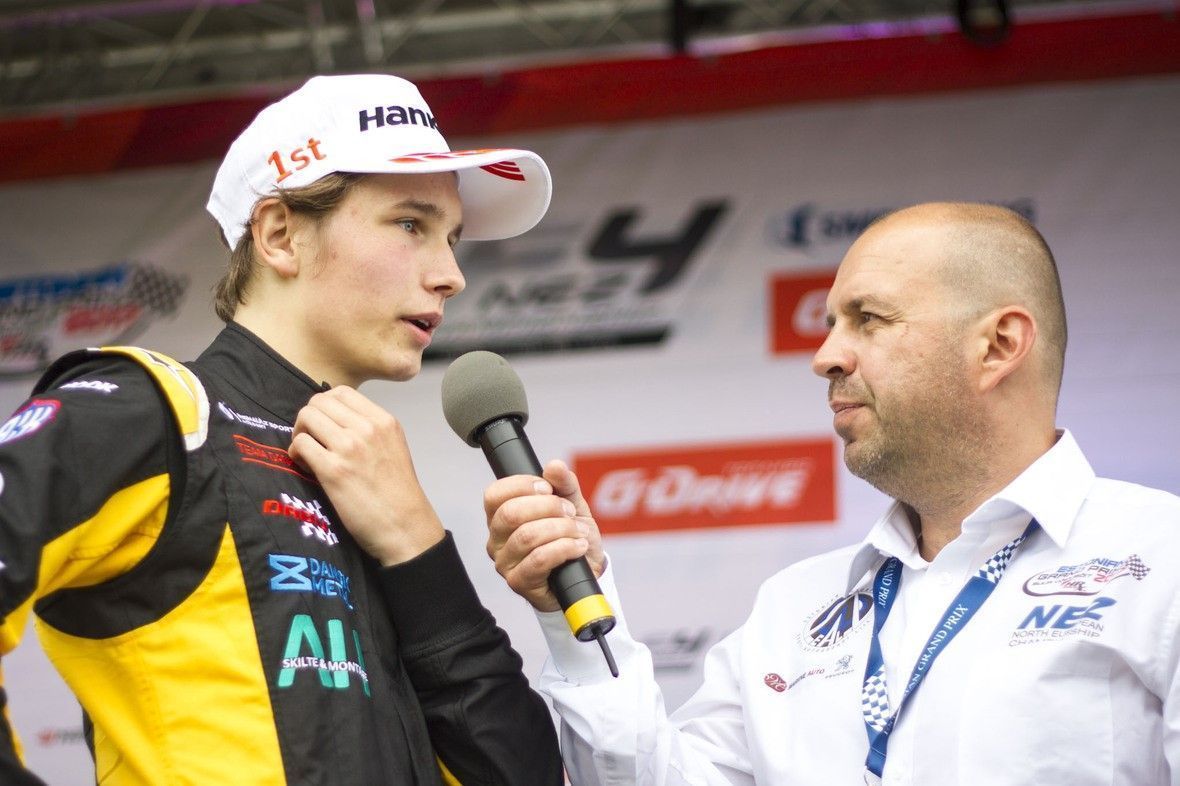 The rain had eased overnight and whole Saturday was driven in dry conditions. It was a very long day for the drivers and teams, as the action on track started as early as 9:00 and finished at 19:15 in the evening.

The 19-drivers field was pumped up to kick off with the second day of competition in auto24ring.

The drivers used Hankook’s slick tyres for the first time this weekend when the Q1 began. The surface was still a little bit damp but it got much better as the 19 drivers were giving all they got to get probably the most important pole position of the season.

After what seemed to be Guillem Pujeu’s maiden pole in F4 NEZ, his best lap time was deleted because of yellow flags which were brought out, due to Bent Viscaal crashing his car in the fast S-section, and Pujeu eventually dropped to P5.

Pujeu’s countryman Xavier Lloveras claimed the pole position – his fifth of the season and also taking P1 for Race 2 – but the fight for P1 was as close as it could have gotten. Christian Lundgaard lost out by 0.011’ to his rival.

Russians Nikita Volegov and Alexander Smolyar followed closely behind with Volegov losing also by under one tenth of a second. Pujeu will start from P5 ahead of Vladimir Tziortzis and Lukas Dunner. Juuso Puhakka starts Race 1 from P8 and completing top ten are Ivan Berets and yesterday’s fastest driver Sten D. Piirimagi.

Lundgaard took his fourth win of the season after overtaking championship rival Lloveras at the start. He managed to build a comfortable lead as the Spaniard came under serious pressure from Puhakka towards the end of the race. The Finn had an excellent race charging from P8 to finish on the podium with Lundgaard and Lloveras.

Volegov finished as the best Russian driver in P4 in front of Tuomas Haapalainen who picked up six places from where he started. At one point there was almost half of the field fighting behind Volegov, going into half of the track as a 7-cars pack, side-by-side, and several drivers swapped positions in the space of few laps. Smolyar managed to get P6 ahead of Tziortzis who collided with initial pole-sitter Pujeu ending the Spaniard’s race.

Piirimagi finished P8 and Viscaal P9 after a great comeback which earned him two points. Dunner snatched the last point right in front of Sami-Matti Trogen. The race was miserable for two Russians Ivan Shvetsov and Mike Belov, latter without even starting because of technical problems.

Finally we saw a titanic and fierce battle for the lead of the race between Lundgaard and Lloveras during the first laps of the race until the Dane passed Lloveras and went on to win his second race of the day (3rd in a row in NEZ, 6th in a row in F4). He had to survive late safety car called on track by an accident between Viscaal and Belov that ended the Russian’s race. Volegov, who had overtaken Lloveras shortly after Lundgaard, got close to championship leader during the final lap of the race but couldn’t prevent Lundgaard’s perfect day.

Tziortzis also had a great Saturday in Parnu and he finished P4 just holding his place ahead of Smolyar. Puhakka took P6 despite Dunner almost overtaking the Finn after the restart. Pujeu took his first point of the season with P8. After all the incidents the Spaniard experienced that must have been even a slight consolation.

With his two wins Renault Sport Academy driver Christian Lundgaard widened the margin by 12 points to Lloveras and now leads the championship by 14 points.