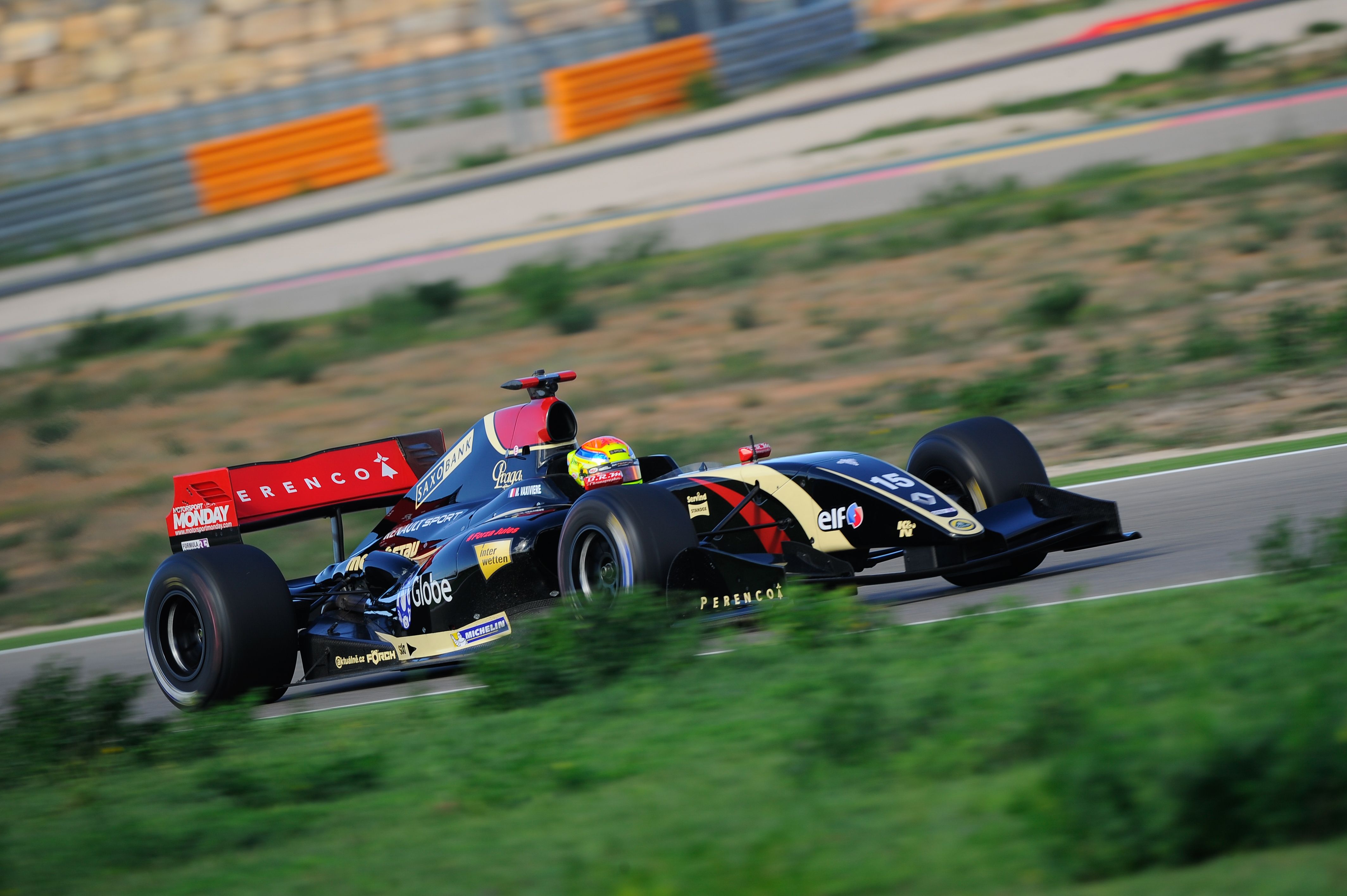 After setting best time on Monday with Alexander Albon, the Lotus team was quickest for the second consecutive day of the Formula Renault 3.5 Series collective tests thanks to Matthieu Vaxiviere. The Frenchman dominated both sessions of the day at the Motorland Aragón circuit and clocked the fastest lap in 1:40.519; ahead of Gustav Malja (Zeta Corse) and Pietro Fantin (International Draco Racing).

Many changes took place on day two of collective testing at Motorland Aragon. Jazeman Jaafar moved from DAMS to Fortec Motorsports, where the other seat was filled by Luis Sa Silva, who drove for Pons Racing yesterday. Oscar Tunjo replaced the Angolan in the Spanish squad, while others chose to move to different teams, such as Andrea Pizzitola (Tech 1 Racing) and Nicholas Latifi (Lotus).

Following overnight showers, the competitors took to the circuit on wet weather tyres. As the conditions got better Pietro Fantin and Beitske Visser (AVF) were the first to switch to slicks. The times improved under the leadership of Brazilian, who traded the top spot with Egor Orudzhev (Arden Motorsport), Matthieu Vaxiviere and Jazeman Jaafar. Two minutes from the end of the session, the Lotus driver completed a lap in 1:41.463 for best time of the session ahead of Pietro Fantin, Andrea Pizzitola, Egor Orudzhev and Beitske Visser.

In the afternoon, Maxx Ebenal (Tech 1 Racing), Indy Dontje (Comtec Racing), Vasily Romanov (Zeta Corse), Dennis Olsen (Strakka Racing), Jazeman Jaafar and Lucas Auer (Arden Motorsport) all took turns at the top of the time sheet. The first driver to beat the morning’s best time set by Matthieu Vaxiviere was the Frenchman himself. In spite of the strong runs by Pietro Fantin and Gustav Malja, Matthieu Vaxiviere posted a time of 1:40.519 to end the day at the top of the time sheet ahead of the Swede and Brazilian. Jazeman Jaafar and Egor Orudzhev completed the top five.

Matthieu Vaxivière: “This morning, we waited to head out on to the track because it was damp. We ran to see if everything was okay on the car and we set a good time on new tyres. In the afternoon, we did some tests with the clutch for the standing start procedure before changing the set-up to better handle the wind. It went well on used tyres, as well as on fresh rubber despite a mistake, then finally with new tyres! It was a promising day, because I came from the FIA WEC race in Shanghai and I was still coping with jet lag!”

Gustav Malja: “Like yesterday, it was a good day in spite of a few problems! On the damp track surface, I made a mistake, an easy one, and I will learn from it. Once the car was repaired, I quickly found the pace before a problem cost us track time. All the same, I put in a very good time and I am happy because I turn 19 today! Thanks to the team for their work and professionalism. The grip, speed and brakes, it is all impressive and incredible on this car! I enjoy it, even more so than the Formula Renault 2.0 that I liked a lot! I hope my performance will open possibilities for 2015!”

Pietro Fantin: “The morning session went well before we tried a lot of things on the car in the afternoon. The package is very positive, but there is more work to do tomorrow. I am sure we can finish higher tomorrow. Vaxiviere was very fast; but we only used one set of new tyres, which changes a lot of things.”