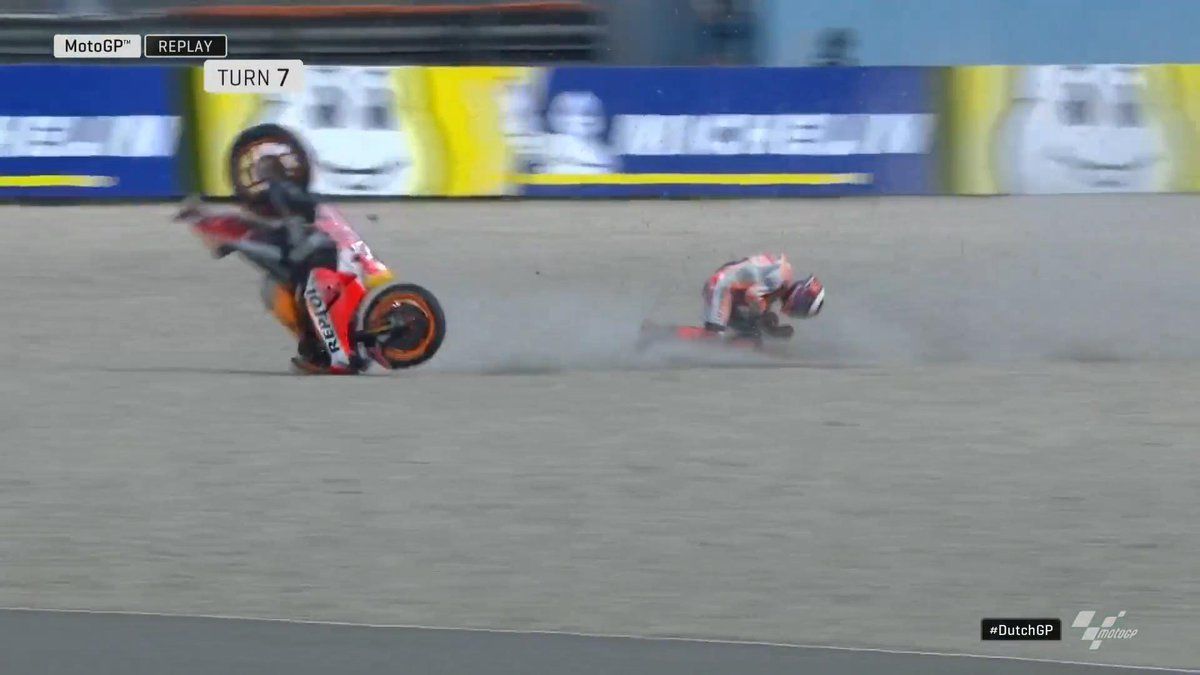 Honda’s Jorge Lorenzo received further jolt in a difficult 2019 MotoGP season as he has been forced out of the Assen GP weekend after FP1 crash.

Under pressure to deliver good results in his maiden Honda MotoGP season, Lorenzo had a high-speed crash at Turn 7 at Assen in the FP1 session. He was immediately taken to medical center but was moved to Assen Hospital for further checks.

He complained of pain to his chest and spine. Spanish broadcaster DAZN provided further updates after it was confirmed that he will miss the FP2 session as they stated that Lorenzo suffered a  stable fracture of the T6 vertebrae after the initial check at the hospital.

It is expected for Lorenzo to move Groningen hospital for further treatment as he officially declared unfit for the remainder of the Assen weekend. MotoGP’s medical center Dr. Charte spoke to DAZN, and he said: “Jorge is okay. He’s in a lot of pain.

“The problem we have now is that the capacity they have in Groningen to do an MRI is very limited due to the fact that their trauma centre is very crowded. In the CAT scan, that we did in Assen, now talks about a fracture to the sixth vertebrae.

“What can we do now? We’ll have to do an MRI to see if any more verterbrae are affected. Here they can’t do it, and so Jorge and the team have decided to move him to Barcelona to Doctor Caceres, with whom I’ve now spoken, and they’ll do a resonance in the Hospital Universitari Dexeus Quiron and there they’ll see which path to follow.

“Our initial thoughts are that it won’t be surgery, but we can’t know until we have the MRI. He’s okay but in a lot of pain and unable to move. He’s certainly unfit for the rest of the weekend and he’ll go to Barcelona this afternoon.”

At the same time, Honda’s boss Alberto Puig added: “It’s a shame he’s had an accident and fractured this verterbrae. He will go to Barcelona so they can have a better look in the Clinica Dexeus and continue the treatment as indicated by the doctors. It’s what it is.

“A broken vertebrae is not a little finger. It’s something that needs time. It’s his back and it will need time, but, evidently, the specialists will have to judge. In Barcelona they will outline everything he can and can’t do. Nobody likes to crash nor wants to. You fall and you get up and this is what Jorge will do.”

Elaborating more on Lorenzo’s crash, Michele Zasa, Clinica Mobile, spoke to MotoGP and said: “Jorge reported on the CT scan a fracture on the 6th thoracic vertebrae, so they are still deciding how to proceed.

“He will most probably fly back to Barcelona where he has his own trusted neurosurgeon to check on him, he will probably also undergo further checks, specifally an MRI, but this is still a phase when they are deciding what to do.

“For sure he’s unfit, for the moment, there is this reported fracture on the 6th thoracic vertebra, no nuerological signs, this is important to say. He moves everything and doesn’t have any neurological signs.

“Now we will see how to proceed for the next hour and what the treatment will be. The helmet has external signs like scratches but he didn’t lose consciousness, he was okay, not knocked out or concussed. So, the contusion was to the chest and the back.”