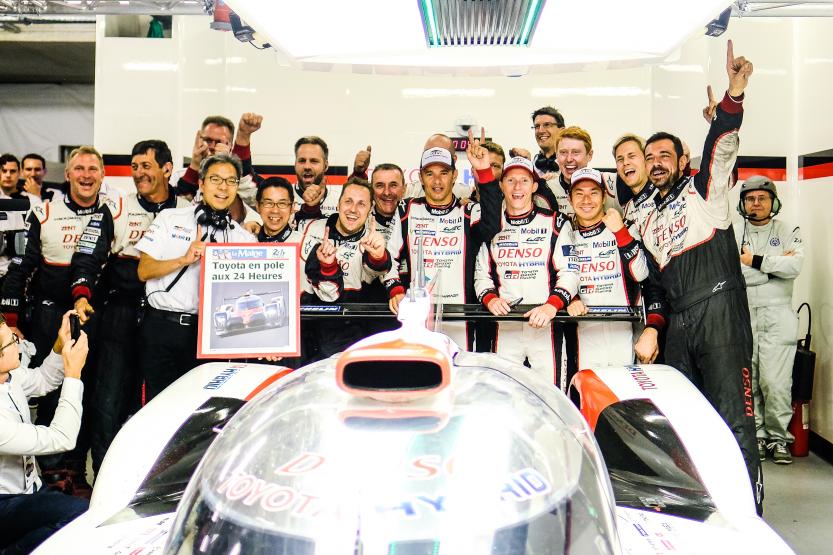 Toyota Gazoo Racing today gave the firmest of signals to its competitors of its desire to conquer the 24 Hours of Le Mans.  The Japanese team, and two of its Japanese drivers, secured the front row of the grid for this weekend’s third round of the 2017 FIA World Endurance Championship race, and smashed the qualifying lap record to bits in the process.

Aston Martin, Ferrari, Ford, Corvette and Porsche produced a battle royal in LMGTE Pro, with the British marque coming out on top with pole and a new qualifying record as well.

Kamui Kobayashi of Toyota Gazoo Racing produced a stunning lap in the No.7 TS050 HYBRID to set a new qualifying lap record (for the current track configuration) of 3:14.791.  This smashed the old record of 3:16.887 set by Porsche’s Neel Jani in 2015 by 2.096s! Kobayashi starts the race with Mike Conway and Stéphane Sarrazin.

The No.8 Toyota of Kazuki Nakajima, which the Japanese driver will share with Sébastien Buemi and Anthony Davidson, will share the front row of the grid for the start of the 85thafter a lap time of 3:17.128 placed it in 2nd place.

Just one tenth of a second behind was the No.1 Porsche 919 Hybrid of Lotterer-Jani-Tandy who will share the second row with their team mates in the No.2 entry – the latter having to finish the day’s running prematurely after pulling off track as a precaution due to increased engine temperatures.

The third row will be filled by the No.9 Toyota TS050 of Lapierre-Kunimoto-Lopez and the ByKolles Racing ENSO CLM -Nismo of Webb-Kraihamer-Bonanomi which recorded a fastest lap in the hands of the Webb of 3:24.170.

Times tumbled in LMP2 and ORECA was once again the chassis to beat.  Alex Lynn in the No.26 G-Drive Racing entry stopped the clocks at 3:25.352 which was an astonishing 11.25 seconds faster than the previous FIA WEC LMP2 qualifying lap record.  The Briton shares the cockpit with Roman Rusinov and Pierre Thiriet.

Vitaly Petrov (Trummer-Gonzalez) in the No.24 CEFC Manor TRS Racing ORECA 07 Nissan held provisional class pole for some time with a time of 3:25.549 before being pipped by Lynn and eventually dipping to third place.  Claiming second in class was Ho-Pin Tung (Laurent-Jarvis) in the No.38 Jackie Chan DC Racing six tenths behind LMP2 pole.

Aston Martin, Ferrari, Corvette, Ford and Porsche all played their part in a thrilling qualifying session which ended with just 1.7 seconds separating the 12 cars in the LMGTE Pro category.

Darren Turner, a former 2-time class winner at Le Mans, put the No.97 Aston Martin Vantage which he will share with Jonny Adam and Daniel Serra on pole in the GTE categories with a record-breaking time of 3:50.837.

Between Turner and his AMR team mates in the No.95 (Thiim-Sørensen-Stanaway) was the No.51 Ferrari 488 GTE of James Calado (PierGuidi-Rugolo), just 0.19s seconds from the pole man.

Ferrari, Ford, Corvette and Porsche followed in quick succession behind them, the times signalling a great race ahead in this World Championship category.

The different GT marques were equally well represented in LMGTE Am, with the first four places being filled by Corvette, Aston Martin, Ferrari and Porsche.

The WEC’s Am points leading No.98 Aston Martin Vantage of Pedro Lamy-Paul Dalla Lana and Mathias Lauda challenged for the class pole throughout, finishing the third and final qualifying session 0.3s behind the Larbre Corvette.  Next highest WEC competitor was the No.77 Dempsey Proton Racing Porsche 911 RSR, the performance of Cairoli-Ried-Dienst no doubt being boosted by the presence of team owner Patrick Dempsey.

There is no track action tomorrow to allow teams time to prepare the cars for the twice-round-the-clock classic which begins at 15h00 on Saturday.