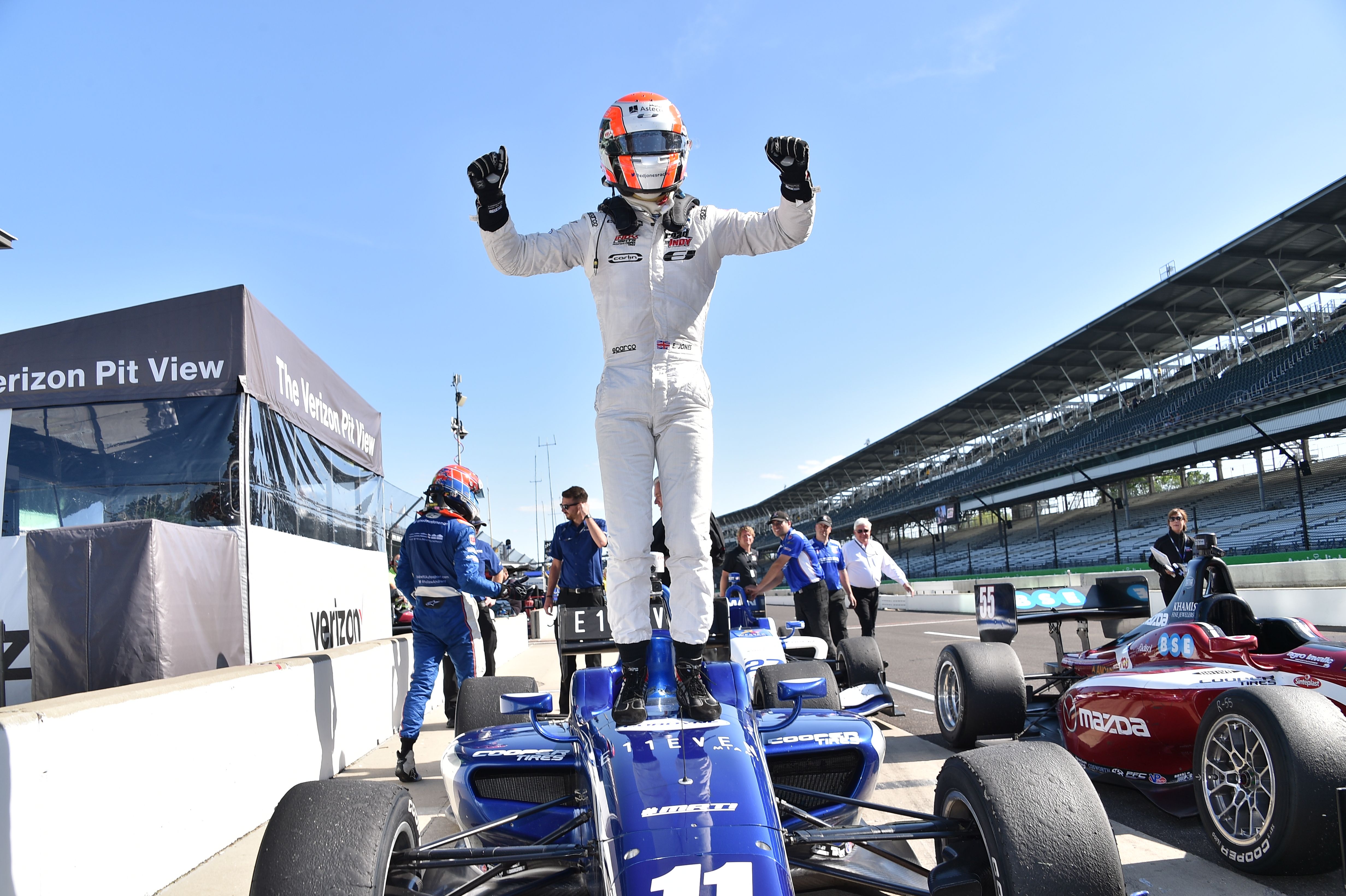 After a disappointing weekend to begin his Indy Lights Presented by Cooper Tires season in St. Petersburg, Ed Jones and the Carlin team have been on a tear. The Dubai-based Englishman this afternoon won a thrilling Mazda Grand Prix of Indianapolis Presented by Cooper Tires contest at the Indianapolis Motor Speedway Grand Prix road course, marking a fourth successive top-two finish for one of the preseason title favorites on the highest rung of the Mazda Road to Indy.

Jones’ second victory of the year ensures he now holds a 23-point advantage over Californian Kyle Kaiser, who finished sixth for Juncos Racing. The season champion will pocket a Mazda scholarship valued at $1M and an opportunity to contest a minimum of three Verizon IndyCar Series races in 2017, including the Indianapolis 500.

Last year’s winner of the Pro Mazda Championship Presented by Cooper Tires, Santiago “Santi” Urrutia, led for just a few yards following a brief full-course caution in the late stages of the 30-lap race before finishing second for Schmidt Peterson Motorsports with Curb-Agajanian. Englishman Dean Stoneman also led briefly for Andretti Autosport before being forced to settle for third.

The action began right away – predictably at the tight Turn One where the top three contenders, pole qualifier Jones, outside front row starter Felix Rosenqvist (Belardi Auto Racing) and a fast-starting RC Enerson (Schmidt Peterson), up from fifth on the grid, approached the braking area three abreast. Equally predictably, that was unlikely to work. Jones just about managed to maintain his advantage, while Stoneman, who started sixth, somehow emerged in second place ahead of Rosenqvist and Urrutia, who started third. Enerson’s brave maneuver came to naught as he was forced to take the escape road, emerging far back in 11th. Several other cars also made contact, with fourth-place qualifier Felix Serralles (Carlin) taking to the grass and Shelby Blackstock (Andretti Autosport) and Neil Alberico (Carlin) rejoining at the tail of the field after making pit stops to check for damage.

Jones led the first 23 laps, although he was never able to shake off Stoneman, who remained just a few Dallara-Mazda car lengths behind in second. Urrutia was next after picking off last year’s European Formula 3 champion Rosenqvist on Lap Six, followed by Serralles, who overtook Scott Anderson (Schmidt Peterson) and Zach Veach (Belardi Auto Racing), then set a sequence of fastest laps as he closed rapidly onto the tail of Rosenqvist.

Farther back, after Enerson overtook Anderson cleanly for seventh at Turn Seven on Lap 22, Scott Hargrove’s attempt to pass Anderson a few corners later ended badly with both cars spinning. The incident also brought out the race’s only full course caution, setting the stage for a five-lap dash to the finish.

The restart was wild as Stoneman drafted and then cleanly out-braked Jones to take the lead into Turn One. Urrutia also took the opportunity to nip past Jones. But the Uruguayan wasn’t content with second. Stoneman defended the inside line as the two leaders headed toward Turn Seven, but Urrutia still dived to the inside under braking. Both cars slid wide on the exit, which allowed Jones to gratefully slide back past both of them to regain the lead and race on to victory.

Urrutia recovered quickest to remain in second, followed by a disgruntled Stoneman, then Rosenqvist, Kaiser, who made up three positions in the late stages, and Serralles, whose attempt to pass Rosenqvist for fourth at Turn 12 on the final lap took him instead into the escape road and ultimately cost him a couple of positions.

Indy Lights Presented by Cooper Tires Round Seven will start tomorrow at 1:25 p.m. EDT, immediately prior to the Angie’s List Grand Prix of Indianapolis Verizon IndyCar Series headline event. Live timing and streaming video will be available at indylights.com,indycar.com and on the Road To Indy TV App.

Ed Jones (#11 Rebel Ali Resorts and Hotels-Carlin): “The safety car mixed things up quite a bit. It’s so frustrating to have the yellow come out when you’ve led the whole race, have a good rhythm going and a good gap. But you can’t let that affect you. It’s a long run into Turn One so it was next to impossible not to let someone get a run on me, and Dean did. We were right next to each other, with only just enough room to get through. We were pretty close to going off. I felt pretty badly, going down to third, but I could see the two guys ahead of me going at it and I knew something was going to happen. I just kept calm and picked up the pieces. It’s an amazing feeling to win at Indianapolis; it’s another thing to tick off the box! Hopefully next year, I’ll be in IndyCar and tick that off the box as well.”