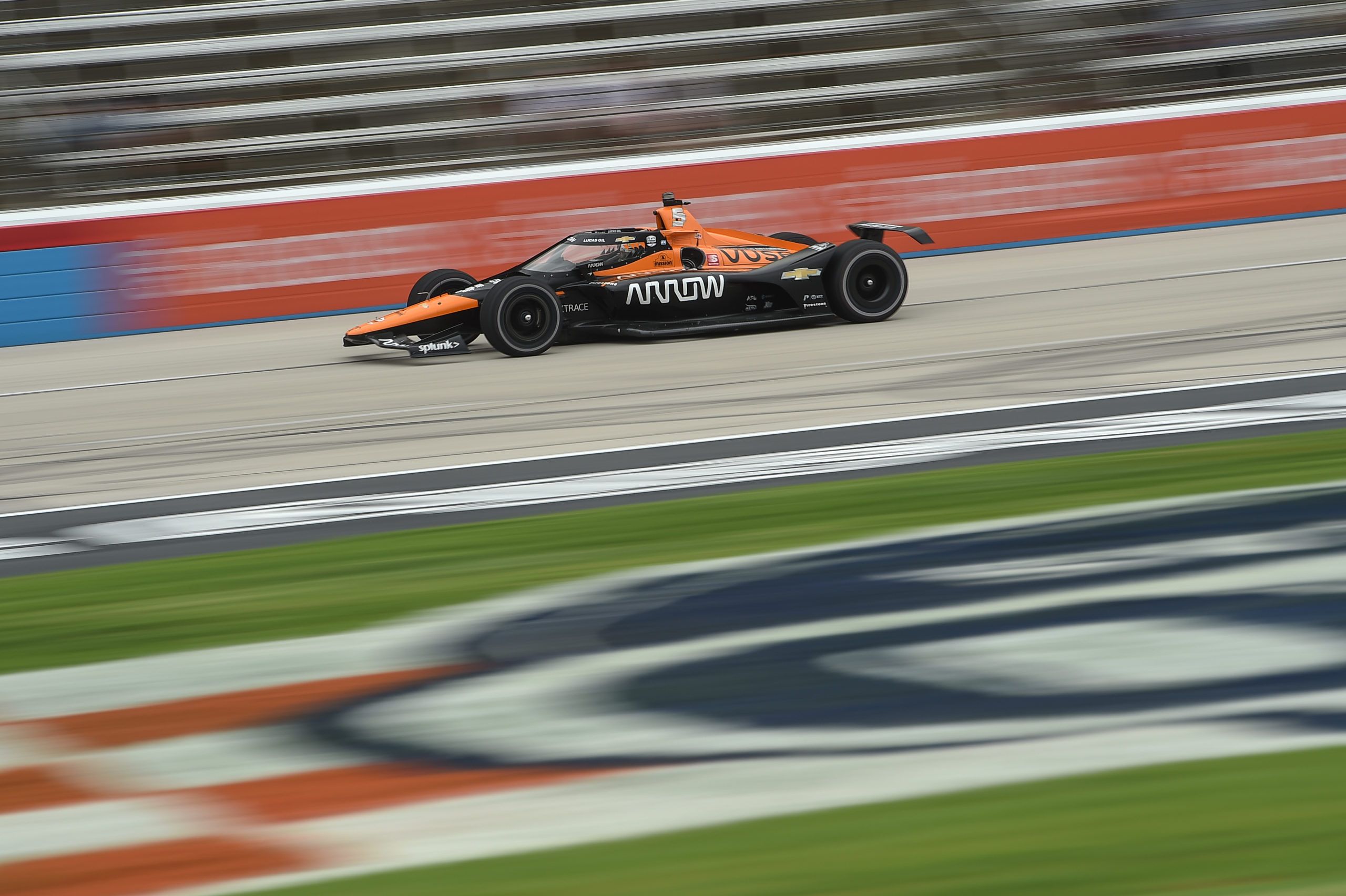 The race got off to an alarming start, with a multi-car pileup at the flying of the green flag. Among cars involved were AJ Foyt Racing’s Dalton Kellett and Sebastien Bourdais, as well as DCR pairing Ed Jones and Pietro Fittipaldi, Andretti’s Alexander Rossi, and Carlin’s Conor Daly, whose IndyCar was upturned in the wreckage.

Sparking the accident was Fittipaldi, who hit the rear of Bourdais. As the latter veered to the inside of the track, others were collected. Caught off guard, Daly approached the wreckage at speed and was sandwiched between Kellett and Jones. The Carlin driver flipped on his side, before rolling upside down and sliding into the infield where his car was righted after hitting the grass.

In the absence of a red flag, a caution was thrown, before the race restarted with CGR’s Scott Dixon in the lead on lap 18. The Kiwi led teammate Alex Palou and MSR’s Jack Harvey in what would be a repeat of Saturday’s activities in the opening stages.

Also reminiscent of Saturday’s race was the scarcity of overtaking over the following laps, with no changes of position near the front of the grid until a myriad of pit stops on lap 73. The pit exchange saw Penske’s Josef Newgarden cycle out in third, ahead of AMSP’s Patricio O’Ward.

Unable to make it past Newgarden, O’Ward soon fell into the clutches of Harvey, who passed the Mexican to claim fourth. On lap 115, O’Ward repassed Harvey before the latter’s race ended with an undiagnosed issue at the rear of his Dallara IndyCar. It was the second DNF for an Andretti car in this short period of the race, with another unexplained issue bringing an end to James Hinchcliffe’s race.

Despite Harvey easily making it into the pits, a full course yellow was brought out, under which the remaining runners pitted. At the restart, AMSP’s Patricio O’Ward passed several others to claim third from RLLR’s Graham Rahal, who gained a significant advantage in the pit exchange.

O’Ward soon passed Penske’s Will Power to take second, with Rahal following suit and soon dispatching of Power. Injecting life into what had been an unexciting race, Rahal continued his run to pass O’Ward and arrive at the gearbox of Dixon.

Come the next round of stops, Dixon was still leading. After the pit stops, however, the Kiwi soon dropped behind Rahal. A lap later, when O’Ward pitted, the Mexican emerged ahead of both Dixon and Rahal, but still behind Newgarden.

On lap 190, a caution was brought out for AMSP driver Felix Rosenqvist and the Swede’s three-wheeled IndyCar. At the restart, Newgarden led O’Ward, before the latter claimed the lead with 23 laps to go.

O’Ward cultivated a large lead, before crusing to his first-ever IndyCar victory from Newgarden. Rahal rounded out the top three, with Dixon falling to fourth and Andretti’s Colton Herta the last of the top five.

Penske’s Simon Pagenaud finished sixth, from Palou who wound up seventh come the end of the race. In eighth was Penske’s Scott McLaughlin, who led ECR’s Rinus Veekay in ninth and Andretti’s Ryan Hunter-Reay in tenth.

Here are the results of the last IndyCar race