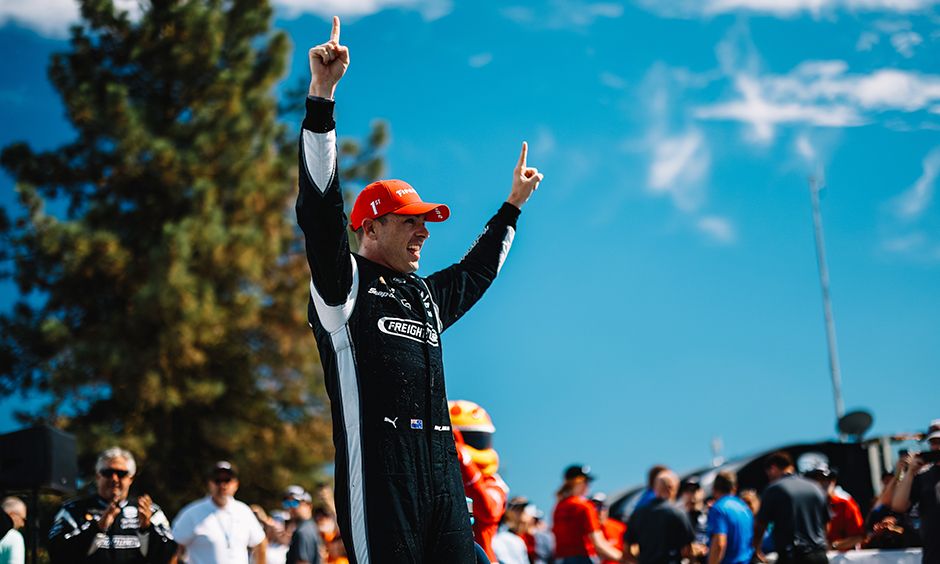 Scott McLaughlin scored another IndyCar win in Grand Prix of Portland ahead of Will Power and Scott Dixon.

Scott McLaughlin made winning look easy Sunday in the Grand Prix of Portland. Predicting who will win the NTT INDYCAR SERIES championship a week from today will be a lot tougher. McLaughlin earned his third victory of the season, driving his No. 3 Freightliner Team Penske Chevrolet to a 1.1792-second margin over teammate and NTT INDYCAR SERIES points leader Will Power in the No. 12 Verizon Team Penske Chevrolet. New Zealand native McLaughlin started from pole and led 104 of 110 laps.

That result ensured McLaughlin will be one of five drivers eligible to win the Astor Challenge Cup at the season-ending Firestone Grand Prix of Monterey on Sunday, Sept. 11 at WeatherTech Raceway Laguna Seca, joining Power, Josef Newgarden, Scott Dixon and Marcus Ericsson. Power can clinch his second season championship – his first came in 2014 – by finishing third or better, regardless of his rivals’ results.

Power’s lead grew from three to 20 points over Newgarden. Dixon also is 20 points back but is third in the standings due to fewer wins this season than Newgarden. Ericsson is fourth, 39 points back. McLaughlin is fifth, 41 behind Power. It’s the 17th consecutive season the NTT INDYCAR SERIES championship will remain up for grabs until the season finale. It’s the first time since the 2017 season that at least five drivers will race for the Astor Challenge Cup at the final race.

Seven drivers held mathematical title hopes with one race to go that year, but double points were awarded at the season finale at Sonoma Raceway, expanding the group of title-eligible drivers, unlike this season. Dixon finished third in the No. 9 PNC Bank Chip Ganassi Racing Honda after starting 16th, sustaining his hopes for a record-tying seventh season championship.

O’Ward finished fourth in the No. 5 Arrow McLaren SP Chevrolet but was eliminated from title contention. Graham Rahal rounded out the top five in the No. 15 Quartz Engine Oil Honda. McLaughlin dominated the early portions of the race after starting on Firestone’s alternate tires, as did six of the top 10 starters in the field. His rivals tried various strategies between the alternate and primary tires, hoping to find an edge that never came.

Helping McLaughlin’s cause was the clean race. Despite pre-race driver anxiety about possible carnage in the tight Turn 1 on Lap 1, every driver made it through that Calamity Corner without incident after the green flag. That helped McLaughlin stretch his lead to nearly 7.5 seconds over Power by Lap 33.

Power pulled to within 4.4 seconds of McLaughlin by Lap 71, with Power, McLaughlin and Team Penske teammate Newgarden making their final pit stops on Lap 80, when it appeared this may be the first caution-free race at Portland since 2007. But McLaughlin’s lead was erased, giving his rivals hope for a restart, during the one and only caution on Lap 84. Rinus VeeKay’s No. 21 Bitcoin Racing Team with BitNile Chevrolet clipped the No. 48 Carvana Honda of Jimmie Johnson while overtaking on the front straightway before Turn 1, sending Johnson’s car into the wall. Johnson was unhurt, but his race was over.

On the ensuing restart on Lap 88, McLaughlin darted away from the field. Power held second but not until his title hopes perhaps flashed before his eyes after O’Ward made an optimistic dive under Power into Turn 1 and jolted Power’s sidepod. Both drivers continued after the contact, with damage to the aerodynamic flip-up in front of O’Ward’s left rear wheel. Race officials also judged O’Ward blocked the hard-charging Dixon after his contact with Power, and the Mexican was forced to surrender third place to Dixon.

From there, McLaughlin managed a gap over Power of about 1.1 seconds for the final 22 trips around the 12-turn, 1.964-mile road course. McLaughlin will split a $10,000 bonus with his team and a charity of his choice as the race winner as part of the PeopleReady Force for Good Challenge.