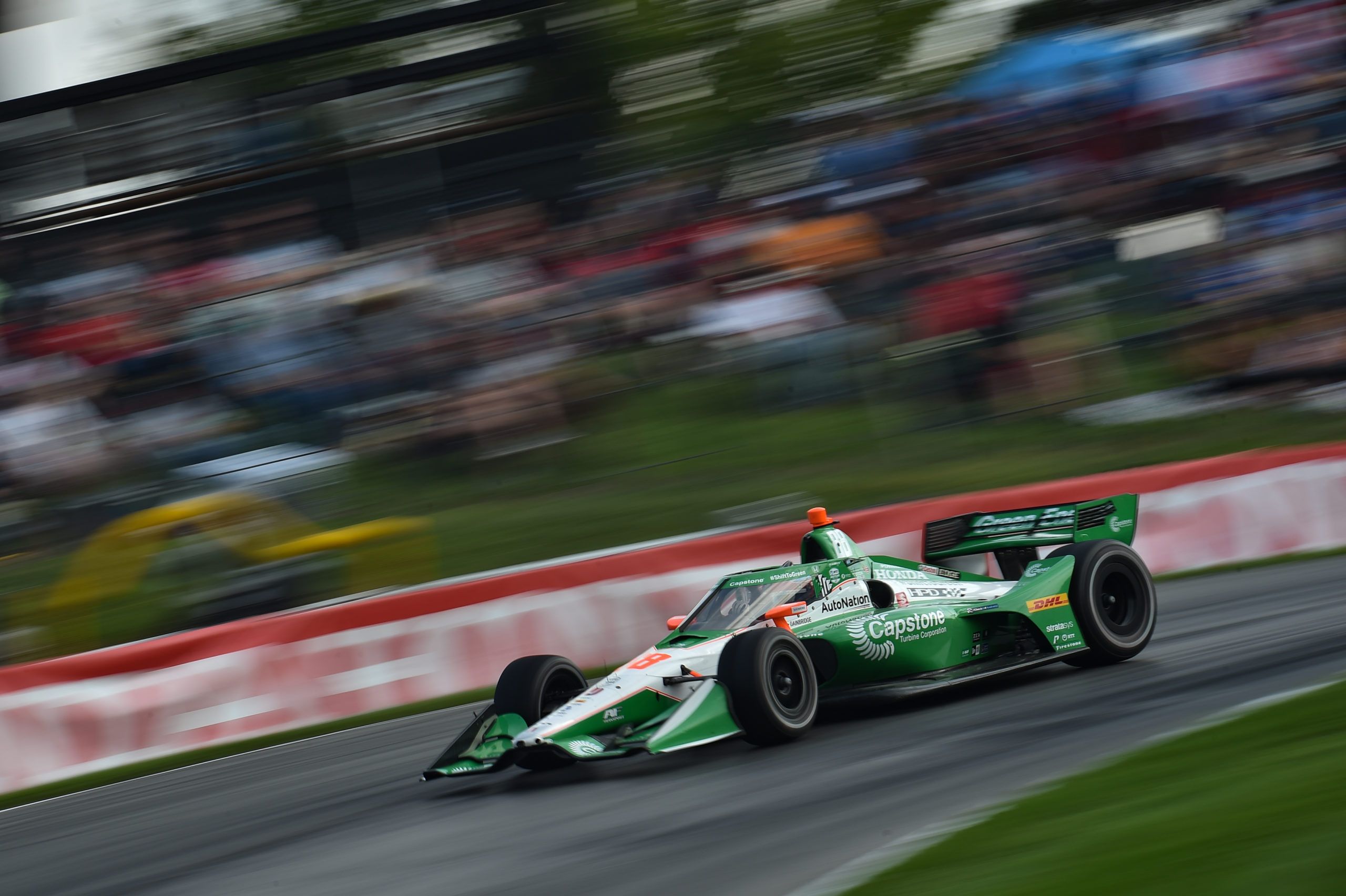 At the second IndyCar race at Mid-Ohio, Colton Herta of Andretti won, from his teammates Alexander Rossi and Ryan Hunter-Reay in the first Andretti 1-2-3 since 2005.

As an IndyCar grid of 23 lined up in the start queue for the second IndyCar race of two at Mid-Ohio, they did so following the lead of Andretti’s Colton Herta, who headed the series’ second youngest first-row in history, with DCR’s Santino Ferrucci to his side.

Herta’s start was less advantageous than the young Californian will have hoped, and his slower start allowed Ferrucci to attempt an overtake around the outside of turn one. It proved, however, a fruitless maneuver, and one too that saw him go off-track, only to rejoin, collecting his teammate Alex Palou in the process.

Having been hit in his own right, Palou made contact with CGR’s Felix Rosenqvist, and the pair of them ended up sliding across the sodden grass, the latter hitting the wall in the process, and bringing out a yellow flag.

The former of the two dove for the pits, and spent the remainder of the race there as the #55 DCR w/Team Goh IndyCar team attempted to fix his car, but to no avail. Rosenqvist’s car was taken back to the pits as well, and despite him having made contact with the wall, his team were able to repair the damage. The CGR team intended to send him back out, though this never materialized. Ferrucci carried on without incidence.

At the restart, CGR’s Scott Dixon sat second, and though it was presumed that the Kiwi might make an effort to take first position when the green flag flew, this was not the case, as instead he let the 21-year-old storm off, nurturing an ever-growing gap in the first laps of green flag running that followed.

Later in the race, a spin from AJ Foyt’s Dalton Kellett in turn one initiated a slew of pit stops, all of which were in a preemptive effort to gain an advantage from what had looked to be a certain caution, which ultimately only came out after all those in the pits had fulfilled their respective stops.

All of the leaders pitted at this point, save for RLLR’s Takuma Sato, and Andretti’s Marco Andretti, who led the field to green upon the restart, from Herta, and CGR’s Dixon. The 39-year-old soon came under siege from the other Andretti cars of Alexander Rossi and Ryan Hunter-Reay in what quickly evolved into a three-way battle, with the former passing Dixon shortly before he had an atypical spin that saw him go to the back of the field. It was a moment of significance in the context of both the race and the championship.

Dixon began his charge through the field at once, gaining one position in bizarre circumstances after Andretti went off at turn one, and rejoined the track behind his CGR adversary. This eliminated one off-strategy car from contention, and later Sato would pull into the pits, relinquishing the lead to Herta.

The race quickly evolved into an Andretti show, with only Graham Rahal of RLLR and Team Penske’s Simon Pagenaud left to represent the other teams of the grid within the top five, subordinate to Hunter-Reay, Rossi, and Herta, who still led.

All three Andretti cars pitted at approximately the 45th lap, with no change to the top three despite Rahal, who performed the overcut, battling Hunter-Reay for third. Notably, there was a difference in tyre choice between Herta, and Rossi, which would factor into the equation later in the race, the latter on harder compound tyres that allowed him to maintain pace in the closing stages of the stint.

Rossi squandered his gap to Herta, but the second-year driver held position to win the race in what was only his second IndyCar victory. Rossi ended the race behind him, and ahead of Hunter-Reay. Rahal came fifth, with CGR’s Marcus Ericsson the dark horse of the race in fifth, with a comfortable margin to his pursuer, Simon Pagenaud of Team Penske.

Pagenaud led his teammate Will Power, who himself beat out Josef Newgarden, also of Team Penske, to the finish. Arrow McLaren SP’s Patricio O’ward did well to come ninth, ahead of Dixon, who performed a late-race pass on 11th-place Rinus Veekay of ECR, the pair of them some 30 seconds off Herta.

Here’s what transpired at Saturday’s race