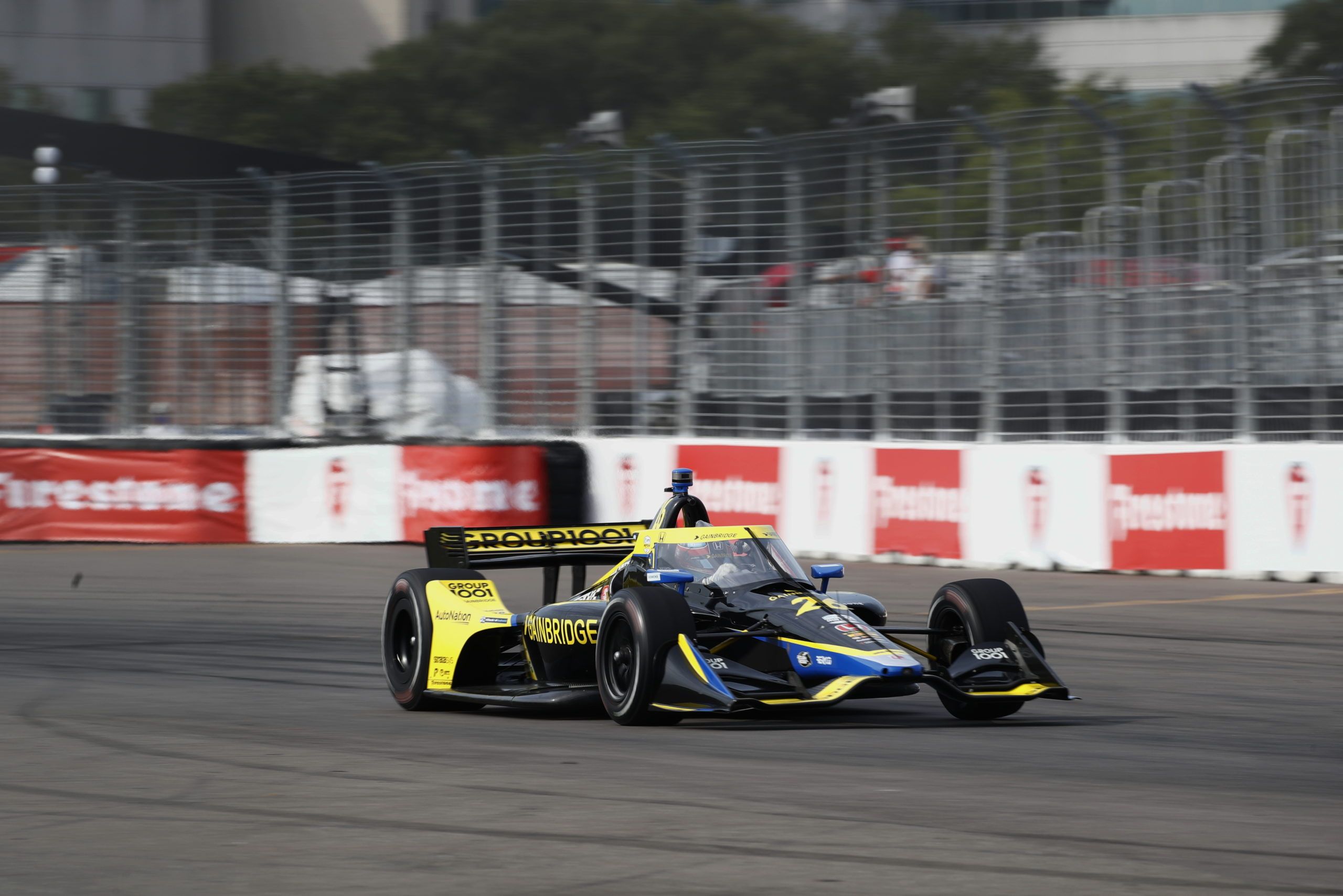 The race got off to an uneventful start, with polesitter Herta maintaining his advantage and cultivating a convincing lead from MSR’s Jack Harvey over the opening 15 laps. Behind, much of the IndyCar field ran in a processional fashion.

The monotony of the early laps, though, was broken by CGR’s Jimmie Johnson, who found the wall at turn 13 on the 17th lap. The American’s marooned IndyCar prompted a caution, before which a number of those in the midfield pitted for fresh rubber and fuel as they sought to minimize time lost on pit road. Leaders did not pit, and therefore remained in order at the race restart.

Action resumed on lap 22, with Herta once more commanding the race from the front. The second lap after the restart saw contact between Andretti’s James Hinchcliffe and RLLR’s Takuma Sato lead to a puncture for the former. Hinchcliffe pitted at the first opportunity, emerging in the midst of the battle for the lead – albeit one lap down.

With the advantage shifting from runners on the softer red tires to those on the harder blacks, second-place Harvey soon came under pressure from Team Penske’s Josef Newgarden on black Firestones, and the American passed the Brit on lap 31. Teammate to Newgarden, Simon Pagenaud, was soon also applying pressure to Harvey.

Pagneaud, though, would be unable to overtake Harvey before the MSR IndyCar driver pitted, along with Newgarden and Herta, who fell to tenth after his trip to pit road. Pagenaud and Rossi followed the leaders into the pits one lap later, on lap 37. Freshly out of the pits, Rossi immediately made contact with RLLR’s Graham Rahal at turn five, cutting the tyre of the former.

Herta returned to the lead on lap 38, with Newgarden in tow. After the pit cycle, 2016 IndyCar champion Pagenaud wound up ahead of Harvey in third. A quiet stint ensued, with little action near the front as had been the case at the race start. This trend was snapped, though, when much of the field – including Herta and Newgarden – pitted on lap 69.

On lap 71, AJ Foyt Racing’s Dalton Kellett joined a short list of retirees including himself and Carlin’s Max Chilton after his IndyCar ground to a halt near turn one, where it would remain. Kellett’s car did not bring out a caution, though it would not be long before one was caused.

Fresh out of the pits, Johnson spun on the exit of turn 2, hitting the barrier and prompting the full course yellow with 27 laps to go. After three laps under caution, the race resumed on lap 76 with Herta again leading the field. Now without a ten second lead, however, the young Andretti IndyCar driver (on black tires) came under pressure from Newgarden, whose car was fitted with red tires.

The adage that cautions breed cautions was again proven accurate on lap 81, this time by DCR’s Ed Jones, who spun after contact with Arrow McLaren SP’s Patricio O’Ward and Hinchcliffe. Jones fell to 20th as a result of the accident, while O’Ward was forced into the pits with damage to his nose.

Upon this restart, Herta managed to pull away once more, though he would be reeled in by Newgarden who was unable to edge closer than half a second behind before Herta pulled away further. The 21-year-old clinched the win in the race, with Penske pairing Newgarden and Pagenaud in second and third.