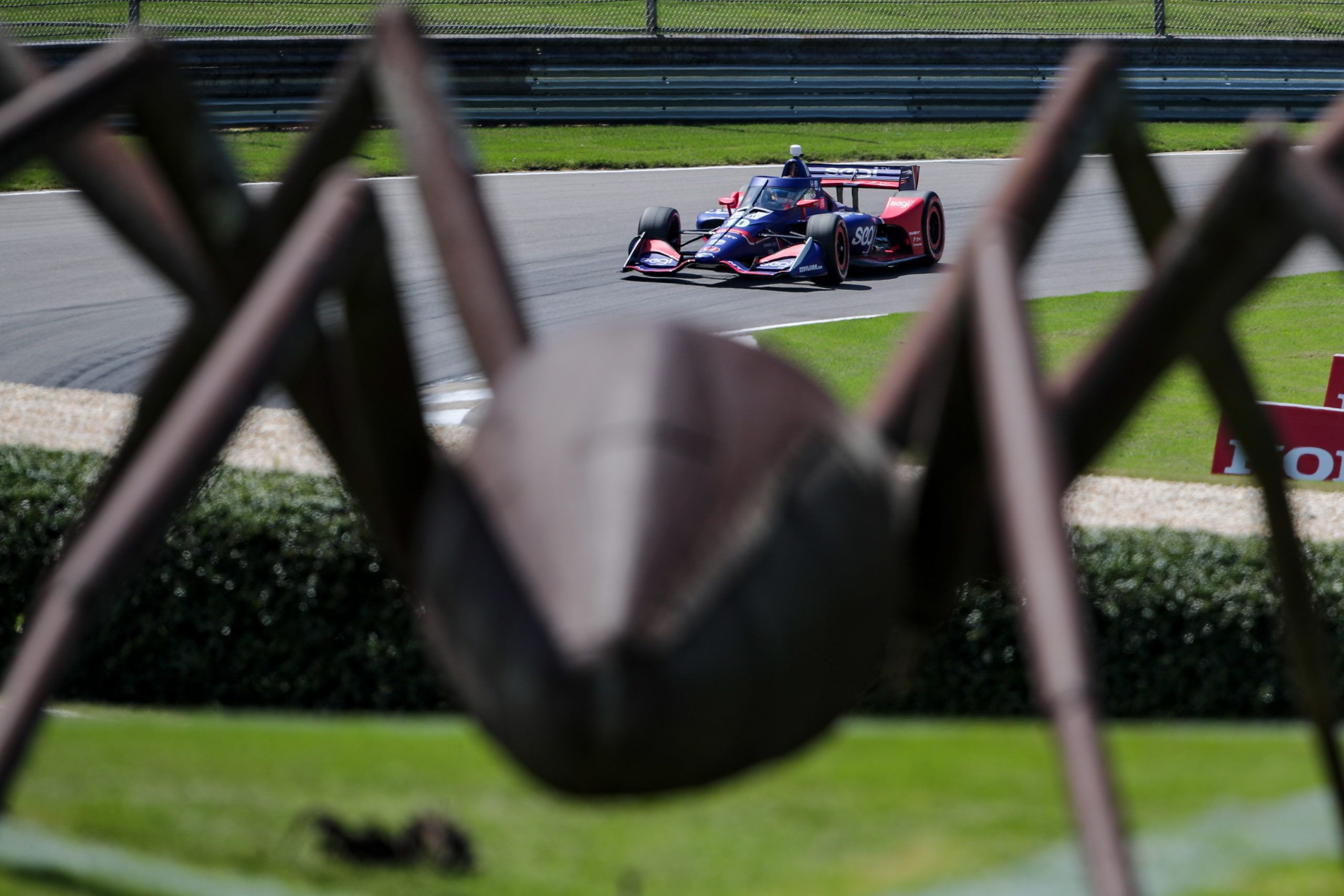 At the start, it was polesitter O’Ward who took the lead, before a spinning Penske IndyCar of Josef Newgarden collected a number of cars in a congested field. Among those involved in the accident were Andretti teammate Colton Gerta and Ryan Hunter-Reay, as well as Carlin’s Max Chilton, ASMR’s Felix Rosenqvist, and ECR’s Rinus Veekay.

For Rosenqvist, contact with Chilton sent the nose of his IndyCar airborne causing what would prove to be terminal damage. Upon the race restart, O’Ward once more retained his lead, fending off a charging Andretti car in Alexander Rossi. Though a compelling fight between the two leaders, it was brief; abbreviated by a spin by CGR’s Jimmie Johnson.

The IndyCar debutant’s pirouette brought out another caution, and it was the subsequent restart that brought the race’s first period of sustained green-flag running. With this came the continuation of the duel between O’Ward and Rossi, who simultaneously pitted on lap 19.

As the two leaders peeled off for pit road, a trio of CGR’s Alex Palou, Penske’s Will Power, and CGR’s Scott Dixon all chose to stay out in an apparent attempt to perform the overcut strategy. Of the three, Palou was the one to pit first, emerging clear of O’Ward and Rossi and proving the overcut to be effective.

Subsequently, CGR teammates Marcus Ericsson and Dixon pitted, leaving Power in the lead though only for a brief period of time before he also pulled into the pits, emerging behind Rossi. Shortly after this, Palou would be overtaken by a resurgent O’Ward, who took the lead atop a revised running order with Palou and Rossi in tow.

On a different strategy to many of those pursuing him, O’Ward pitted once more on lap 43, before Rossi – one of few on the same strategy – followed suit. The former would then be overtaken by AJ Foyt’s Sebastien Bourdais, and RLLR’s Graham Rahal after going wide at Barber’s turn five. All the while, Palou continued to hold the lead, albeit with one remaining scheduled stop.

It would be until lap 62 that leaders Palou and Dixon pitted, and lap 63 saw the pitting of Power. The Australian emerged from the pits just slightly behind Palou, who ran third after pitting for the final time, with Rossi and O’Ward – both yet to pit for the last time – up the road. After pitting, O’Ward would be overtaken by Ericsson, who now appeared out of contention some nine seconds off of leader Palou, who himself led Power by three seconds with 18 laps still to go.

As the remaining laps dwindled, Power in second found himself within two seconds of Palou, as the Australian neared closer to his competition in the closing laps of the race – all the while utilizing a larger reservoir of push to pass.

Palou ultimately managed to respond to Power’s attacks, to win the Grand Prix ahead of the Australian. Dixon remained third, as O’Ward’s alternate strategy proved ineffective and the young Mexican was therfore relegated to fourth. In fifth was Bourdais, who edged out Veekay. The Dutchman, driving for ECR, finished sixth ahead of Rahal.