Home In the Spotlight IndyCar: Dixon makes it two in a row with win at GMR... 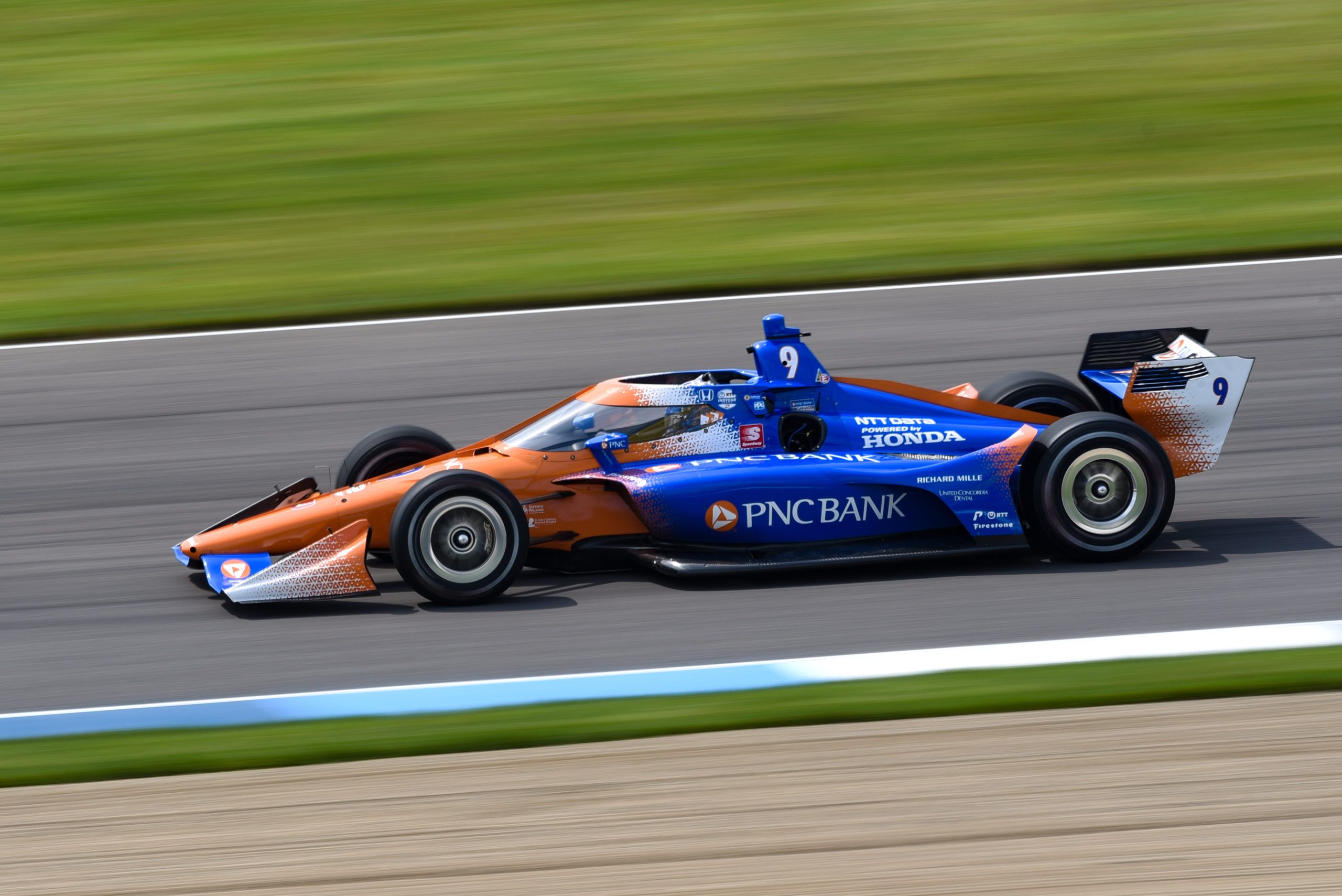 The podium celebration may have been atypical, but the winner wasn’t, as five-time IndyCar champion Scott Dixon won the GMR GP at Indy ahead of Graham Rahal and Simon Pagenaud.

Immediately after the return to racing for IndyCar at Texas, fans were greeted by yet another long break, with a duration of just under one month. However, this painful interruption of the already-delayed 2020 season officially elapsed on Saturday with the green flag at IMS signalling the beginning of the GMR Grand Prix – the first event of a packed calendar stint.

Fittingly, at Roger Penske’s ‘palace’, it was one of the captain’s drivers – three time IndyCar GP winner Will Power – who started on pole, leading Meyer Shank Racing’s Jack Harvey into turn one. It was a clean start for the 26-strong grid, and the lead of Power remained largely unchallenged in the early phases of the 80-lap IndyCar race.

Initially, the Australian had committed to the 2-stop strategy, but after CGR’s Dixon showed just what could be done done on the softer, ‘sticker red’ tyres, he pitted, re-entering the race in fifth position. Power did so behind those who were on the strategy that he had previously intended to utilise, but these drivers – including the likes of Rahal – pitted, granting Power the lead once again, as he led a top three of comprising of himself, Josef Newgarden, and IMS road course ace Harvey.

Towards the end of his stint and on worn tyres, Arrow McLaren SP driver and IndyCar rookie Oliver Askew crashed in the final turn, spinning on the exit of the corner, and hitting the wall whilst facing backwards. It was an ending unbecoming of the sensational drive he had put on up to that point.

The incident brought out a full course yellow flag, and under these conditions, many drivers – including front-runners Power and Newgarden – dove into the pit lane, coming out into traffic. Upon the restart, RLLR’s Rahal led. Behind, Power attempted to fight through the congested field, while Dixon – who had stopped prior to the yellow – became the front-running driver on the three-stop strategy, behind only Rahal and Citrone/Buhl’s Simon Pigot and ahead of Colton Herta (Andretti).

Dixon later made his way past Pigot, and soon, he took the lead from Rahal. Amid Honda’s successes at the front, though, the manufacturer had some troubles near the back, with Andretti driver Alexander Rossi having yet another mysterious technical issue – this time one that ended his race. Pigot would later also fail to finish.

After his pass for the lead, Dixon pulled out an incredible gap. Behind, IndyCar drivers pulled into the pit, and to minimize the risk of getting caught out, Dixon, too, pitted, coming out with a safe margin to his adversaries.

In the closing stages of the race, battles raged up and down the grid, but nobody had answers for Dixon – a driver that has been on the ball in 2020 as he partners successful engineer Michael Cannon, and the New Zealander won in a show of impeccable form to bag his first win on the IMS road course.

The IndyCar podium consisted of Dixon, Rahal, and Pagenaud, in that order in Top 3. Colton Herta managed fourth, while ECR driver Rinus Veekay recovered from a poor weekend at Texas to come fifth a month later.

Andretti driver James Hinchliffe finished just outside the top 10 in eleventh, while Conor Daly came 12th on his debut for ECR. Andretti’s Ryan Hunter-Reay occupied 13th position, while his teammate Zach Veach came 14th after an adventure across the grass late in the race. Felix Rosenqvist was the last of the Chip Ganassi IndyCar drivers.

Here’s what happened in the last race at Texas