T​he first day of IndyCar testing at COTA was overshadowed by rain, cold, and a quiet circuit, with puddles strewn across the track and an air temperature hovering around 40 degrees on Tuesday, when the circus arrived at the circuit.

T​he first big moment of the session was Team Penske’s Josef Newgarden’s near-off which took place roughly seven minutes into the session. The main talking point remained the weather and the new-for-2020 aeroscreen, as well as the rookies like Scott McLaughlin.

U​ltimately, the cold combined with the wet resulted in a red flag as Firestone thought it to dangerous to run, and the session ended under such conditions. T​he aforementioned red flag continued into the afternoon session, as the temperatures remained too low.

At roughly forty minutes, however, the green flag came out, and drivers were permitted to do laps, albeit they were only installation ones – as they were for the whole day. T​he laps that followed were more eventful than any others of the whole day.

It included a spin from Andretti Autosport Honda’s Zach Veach, and an influx of drivers on track. H​owever, that all came to an end after another red flag was called to give the opportunity for drivers and teams to evaluate if the session was to continue.

The decision was made to cut the session short, and the chequered flag ended Tuesday’s festivities. W​ednesday was a far more productive day for the teams on the grid, with much better weather throughout the day. There was some extra water which had accumulated on-track, but that dissipated partially after a two-hour time delay.

IndyCar d​rivers turned laps and ultimately carved a dry line through what was left of the water, and as the day wore on the warmer sun baked the water away. W​ith and without the water, however, there were many spins and mistakes made from all 27 drivers who ran.

The list included Chip Ganassi Racing Honda’s Felix Rosenquist and Marcus Ericsson, Andretti Autosport’s Ryan Hunter-Reay, and others – some of which made mistakes due to the new balance of the cars with the aeroscreen.

A​ndretti/Harding-Steinbrenner Racing’s Colton Herta topped the time sheets for a long time, with the other drivers shuffling around. However, by the end of the session he was fifth with just 43 laps logged – several laps less than Penske’s rookie McLaughlin.

He completed 62 as he also beat Herta’s time to be third. T​he other Team Penske driver, Power, found the most pace out of anybody, leading the pack with a time of 01m46.76s. Albeit, a pink-clad car Andretti Autosport’s Rossi was not far behind.

Reigning IndyCar champion Newgarden performed well in the early afternoon, as he sat second for quite some time. By the end of the session, though, the American was fourth. Team Penske’s Simon Pagenaud, in comparison, was sixth.

This was despite the fact that Pagenaud ran 66 laps to Newgarden’s 53. Arrow M​cLaren SP’s Oliver Askew ended up seventh, ahead of his teammate Patricio O’Ward by three positions, with the latter rounding out the Top 10 of COTA IndyCar test.

The rookie of the pairing completed an impressive 76 laps – a number second only to Ed Carpenter Racing Chevrolet’s Rinus van Kalmthout, who had 82. C​hip Ganassi Racing’s Scott Dixon was eighth as rookie Alex Palou ended up ninth in Dale Coyne Racing Honda.

R​unning for Thursday was considered due to the lack of it on Tuesday and Wednesday, but it was decided that such measures were not necessary. Several IndyCar rookies will be running in the coming days at Texas Motor Speedway, but aside from that, there won’t be much testing until the season opener at St. Petersburg in March. 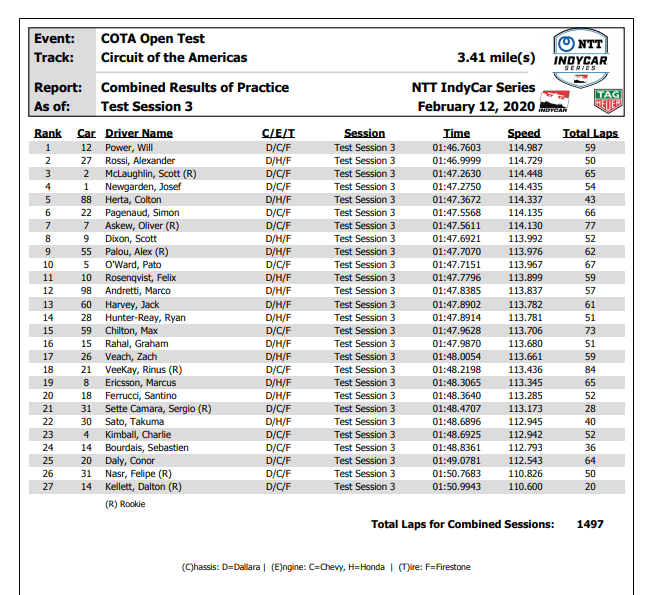 The report was edited by Darshan Chokhani