Home In the Spotlight IndyCar 2020: Best-performing drivers, rookies & teams of the season 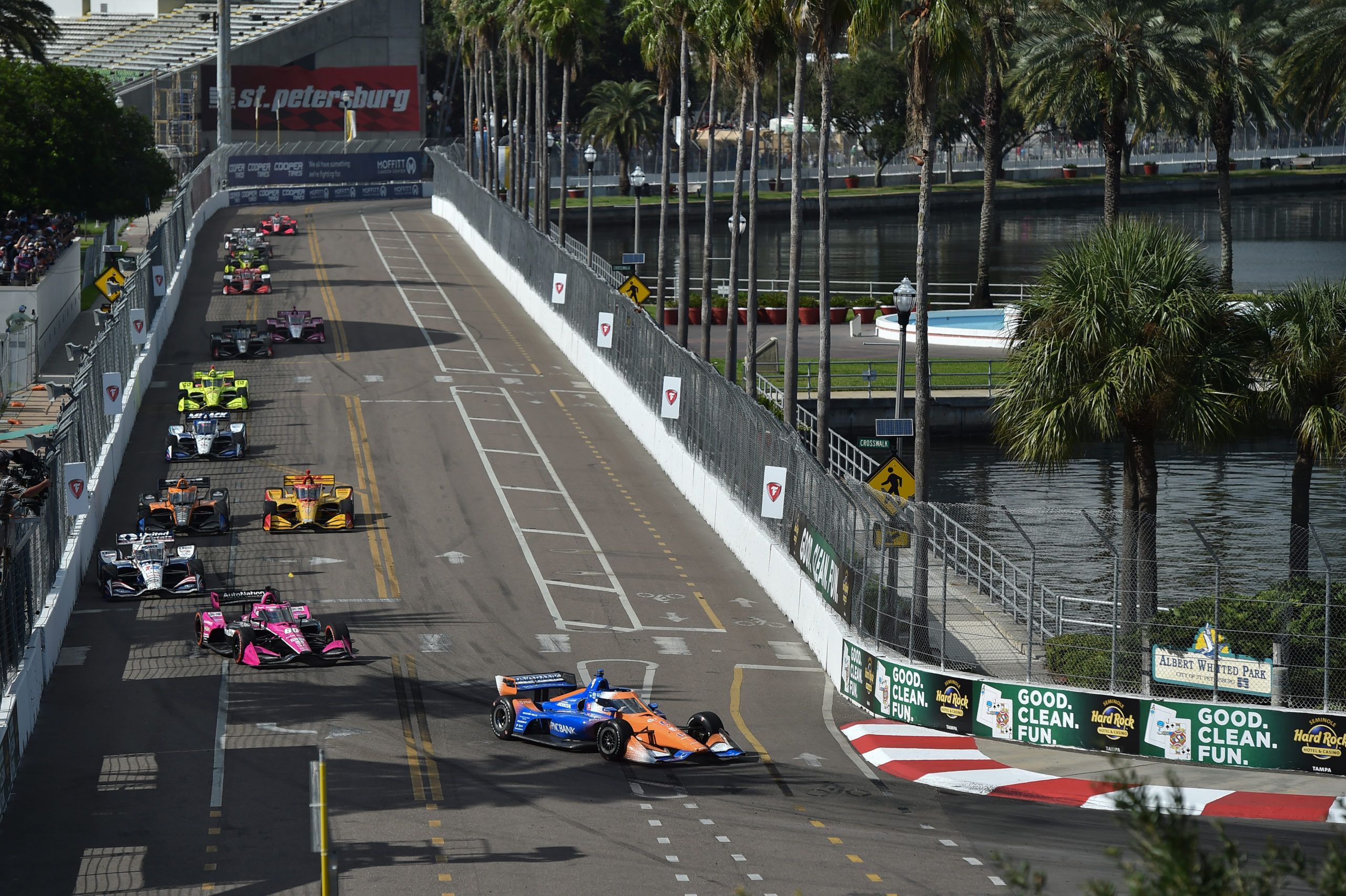 FormulaRapida.net has compiled a list of the best-performing teams, drivers, and rookies, in the unique and historic 2020 IndyCar season.

With a strong rookie field, veteran drivers delivering peak performances, and unique challenges as a result of the COVID-19 pandemic, the 2020 IndyCar season was an indelible one in many regards.

Worthy of note for its ultra-competitive grid, the championship, in its 13th season under the IndyCar name, also had a historic victor: Scott Dixon. The Kiwi was one of the year’s top performers, and drove his way to a historic sixth world title. However, neither he, nor his team, were the only to shine in 2020.

And so, to recognise this fact, and commemorate those whose performances in 2020 were worthy of accolades, FormulaRapida.net has compiled a list of some of the best performers in the uniquely challenging IndyCar season.

A list such as this would be incomplete without the reigning Indy500 winner present, and in 2020, the reigning winner is, as he was in 2017, Takuma Sato (now of RLLR). Sato got off to a rocky start in 2020, failing to start the season opener after crashing out of Qualifying in Texas.

His IndyCar season built up momentum over the following four races, during which he never found himself outside of the top ten. He only broke this streak at the second race at Iowa, where he struggled to replicate the pace of his adversaries.

It was, though, all made up for in the next round, the Japanese driver outperforming the rest of the 33-strong field at IMS with a win at the 104th Indy500. He would come second in the next race at Gateway, before securing ninth in the second race of the weekend.

Performances at Mid-Ohio left something to be desired, the two-time Indy500 winner only managing 17th and 18th. The Harvest GP races brought about similar results, before a sloppy race at St. Petersburg saw him come 10th to finalize his seventh-place standing in the IndyCar championship.

In just his second year of IndyCar – and his first full season in the series – O’Ward impressed, starting by finishing 12th in the season-opener at Texas. In the two races immediately following that result, he would come eighth. His breakthrough drive, though, had yet to come.

For, at the fourth race of the season (and the second held at Road America) O’Ward – starting on pole – would lead for 43 laps of the race, seemingly on course for a victory. However, as the race neared its end, CGR’s Felix Rosenqvist caught the Mexican, passing him for the lead. However intense, the battle between the two young IndyCar drivers remained clean.

It would be four races – and an Indy500 rookie of the year win for O’Ward – before he was once again in contention for a win, as the Arrow McLaren SP IndyCar driver challenged in the second Gateway race, only to be narrowly defeated once more and claim another second place finish.

O’Ward went on to finish 11th and ninth in the two Mid-Ohio races, before a very poor Harvest GP Race 1 was followed by an impressive fifth-place in the race that came after. In the season finale, he finished second, having caught the American late in the only street circuit race of the season. He finished fourth in the championship.

From the first qualifying session of 2020, it was clear Newgarden would be firmly in contention. Having secured pole at the first round in Texas, the Penske driver finished third in the race. He managed seventh in the second race of the year, but struggled to some degree at Road America, the two-time champion coming 14th and ninth in the IndyCar races held there.

His first win came at Iowa, after he came fifth in the race prior – also at Iowa. It was a comprehensive defeat of his adversaries, and was followed by a fifth place in the Indy500. After Dixon won the first race at Gateway, Newgarden responded with a victory of his own at the short oval. For the American, the Mid-Ohio doubleheader, in which he at first finished second (before coming eighth in Race 2) was a turning point in the IndyCar season.

It was after this that he won the first race of the Harvest GP weekend, before scoring a fourth place in that round’s second race. He would win once more, claiming victory in a crazy GP of St. Petersburg. It was a valiant effort from the 29-year-old, who put forward an especially impressive campaign in the latter half of the IndyCar season.

With a myriad of top-seven finishes at the start of the year, it wouldn’t be until the first race at Iowa that the sophomore IndyCar driver went without such a result. In this race, Herta (Andretti) had convincing pace, but would crash out upon a called-off restart, flying over the top of Rinus Veekay’s ECR machine. He would find little success upon the continuation of this weekend, finishing 19th.

However, a bounce-back eighth place at the Indy500 in the race following, and fourth, and sixth place finishes at Gateway further underlined his consistency. He would go on to score a win at the second Mid-Ohio race, before claiming fourth, and second-place finishes at IMS. The season finale at St. Petersburg was only one of three races in which he finished outside the top ten – a remarkable feat considering his teams’ struggles in the season. He finished third in the championship, the highest Andretti driver despite also being the least experienced in IndyCar.

Seemingly one of the first drivers to adapt to the aeroscreen, Dixon cruised to a win at the season opener, with the help of his new race engineer Michael Cannon – formerly of DCR’s IndyCar operation. The win would prove a sign of things to come, as it was followed by another victory in the IndyCar GMR Grand Prix on July 4th, and a third on the trot at the first race of the Road America doubleheader. The second race of that weekend was won by his teammate Felix Rosenqvist, who broke the then-39-year-old’s win streak.

Dixon went winless in the Iowa doubleheader, but nonetheless performed well in both races, and he headed into the 104th running of the Indy500 a favorite for victory. His chances of a win appeared even greater after the first days of practice, which saw his fellow Honda-powered IndyCar drivers find success. He would not win this race, however, coming second to RLLR’s Takuma Sato, who won – controversially – under the FCY.

His final win came in the race immediately following the 500, with the completion of the first race at Gateway. After this, Penske’s Josef Newgarden clinched a win in the second race of that weekend, and Dixon endured a sloppy Mid-Ohio doubleheader, before falling short of Newgarden twice more in the IMS road course weekend – particularly in Race 1. Things became less comfortable for Dixon in the championship, as fears grew that he might lose out on the title in the final round at St. Petersburg.

This was not the case, as Dixon came third, edging out Newgarden – who won the finale – in the championship. It capped off a successful year for Dixon, the CGR IndyCar driver having maintained consistency throughout the duration of the year.

Will Power, Team Penske: With two wins and five poles to his name in 2020, Power had a successful IndyCar season. However, his efforts were often plagued by untimely incidents on track, and a chance at victory was lost at St. Petersburg when he crashed out of the race. Other undesirable results, like when he had a sloppy weekend at Mid-Ohio, prevented him from finding yet more success in the season.

Had it not been for crushingly poor luck, Palou might have topped the rookie standings. A fraught IndyCar debut, which saw the Spaniard from Super Formula be taken out by his fellow debutant Veekay, was followed by a 19th place at the GMR Grand Prix in the IndyCar season’s second race. However, he managed a podium and a seventh place finish at Road America, which was followed by relative successes at Iowa.

He crashed out of the Indy500, as did many other rookies, but finished 15th in the first race at Gateway, improving by three positions in the next race. He would replicate 12th in the next race at Mid-Ohio, before failing to finish in the second race after being taken out of contention once more – this time by his DCR IndyCar teammate Santino Ferrucci.

Palou continued the season with reasonable results at the Harvest GP weekend and St. Petersburg, his efforts impressive enough to earn himself a drive with CGR for 2021.

Veekay’s season began troublingly, the Dutchman crashing twice in one day on debut at Texas. He faced immense criticism for this, but recovered to finish an impressive fifth at the IndyCar GMR Grand Prix. An unremarkable Road America weekend followed, memorable largely for the ECR driver’s incredible pass around the outside of Simon Pagenaud in the first race.

Iowa saw him get taken out in the first race, before coming 17th in the second, but his season would come alive at the Indy500, when he qualified the best out of all of those with Chevrolet power in fourth. He would come an unrepresentative 20th, but his pace was promising enough to convince the IndyCar paddock of his mettle.

He would go on to finish sixth and fourth at Gateway, before securing eighth and eleventh during the Mid-Ohio weekend. He also secured a podium in the first Harvest GP IndyCar race, albeit he failed to match his own performance in the second race.

Though he only finished 15th in St. Petersburg, his lead in the rookie standings was such that starting the race ensured he would take the Rookie of the Year title, his daring racing antics (also seen at IMS as he fought for the lead in the first Harvest GP race) doing their part to impress.

It would be hard to fault CGR for anything they did during the 2020 IndyCar season. Particularly with the #9 car, the team seldom got their strategy wrong, and ultimately secured five wins – four of which came in the opening four rounds, when it is suspected that a greater understanding of the aeroscreen helped their case.

The winningest IndyCar team of the 2020 season, Penske scored seven victories in 2020, perhaps helped by the underperformance of their rival Andretti Autosport. The teams’ first victory came at Iowa, when they swept the weekend. Their second would come in the latter of two races at Gateway, before they won once more with a triumph at Mid-Ohio. Penske also swept the Harvest GP weekend, before winning in St. Petersburg.

Though not a winning operation in 2020, missing out on victories by the narrowest of margins, Arrow McLaren SP‘s herculean efforts as a new organization in IndyCar are also worthy of note. The team, a reinvigorated version of the outfit once known as Arrow Schmidt Peterson Motorsports, found most of its success with O’Ward, whose aforementioned performances edged them closer and closer to a victory as races went by, and the orange and black-liveried cars were regular contenders as they challenged top teams for victories. Similarly, Rahal Letterman Lanigan Racing also played the role of a giant-killer, winning the Indy500 and being in contention at other rounds in what was a continuation of their progression within the series.