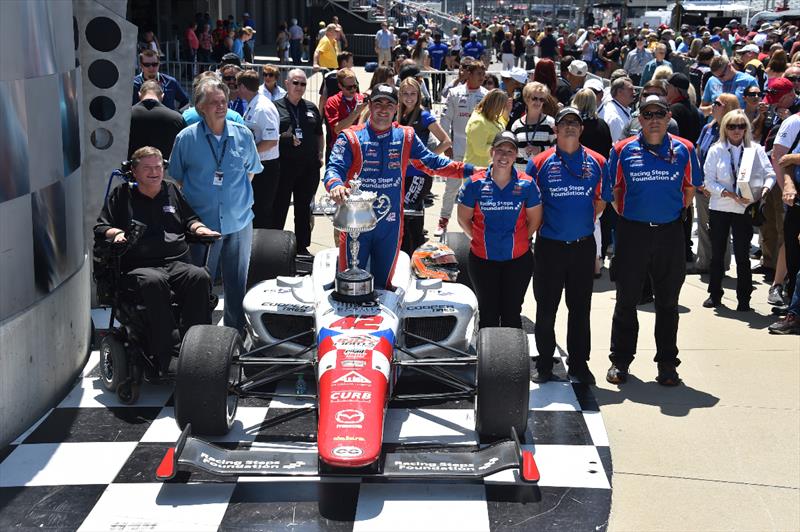 Englishman Jack Harvey has been too often the bridesmaid in his year and a half of competition in Indy Lights Presented by Cooper Tires, but he was out in front when it mattered in this afternoon’s Freedom 100 Presented by Allied Building Products at the Indianapolis Motor Speedway. The race was held in glorious weather conditions in front of a sizable Coors Light Carb Day crowd, part of the build-up toward Sunday’s 99th running of the Indianapolis 500.

For Ringel and Anderson, the finishes represented the best of their careers in Indy Lights. The race also established a new Indy Lights race lap record for Felix Serralles (Belardi Auto Racing) as he circulated the 2.5-mile speedway at an average speed of 196.374 mph, eclipsing the previous mark of 192.301 mph set by Brandon Wagner in 2011.

Harvey and Ringel, who qualified on the pole yesterday at a new record average speed of 197.684 mph, quickly established themselves as the pacesetters. Harvey immediately grasped the advantage by sling-shotting past Ringel at Turn One on the opening lap, as the teammates soon began to inch clear of Kyle Kaiser, who had vaulted from sixth to third on the first lap for Juncos Racing earning the RePlay XD Move of the Race Award.

The two leaders exchanged places several times during the first 10 laps, while Anderson worked his past both Sean Rayhall (8Star Motorsports) and Kaiser to move into third. Enerson also drafted into contention as the four Schmidt Peterson cars edged away at the front of the field.

Harvey was content to settle in behind Ringel through the middle stages of the 100-mile race, but as the leaders circulated relatively conservatively in the 190 mph range – as opposed to the 194 mph pace in the early laps – Kaiser and a train of cars behind him began to inch closer to the leaders.

The pace quickened again on Lap 23 – back above 192 mph – whereupon Ringel and Harvey again edged clear of Enerson, who had drafted past Anderson for third on Lap 22. Harvey, who began the weekend second in the points table (after also finishing second as a rookie in 2014, losing out only on a tie-break to eventual champion Gabby Chaves), grasped the lead on Lap 25, only for Ringel to regain the upper hand next time around.

Finally, on Lap 34, Harvey took advantage of the draft from Spencer Pigot’s lapped Juncos Racing Dallara-Mazda to slip back into the lead at Turn One. It proved to be the decisive move, as the yellow flags waved on Lap 38 and there was insufficient time for the race to be restarted. The sixth win of Harvey’s career elevates him to the championship lead by 192-179 over Jones.

Anderson repassed Enerson for third on Lap 36, while Kaiser finished fifth ahead of Rayhall and Juan Piedrahita (Belardi Auto Racing.)

The second half of the 16-race Indy Lights Presented by Cooper Tires season will commence with a pair of races on the streets of Toronto, Ont., Canada, on June 12-14.