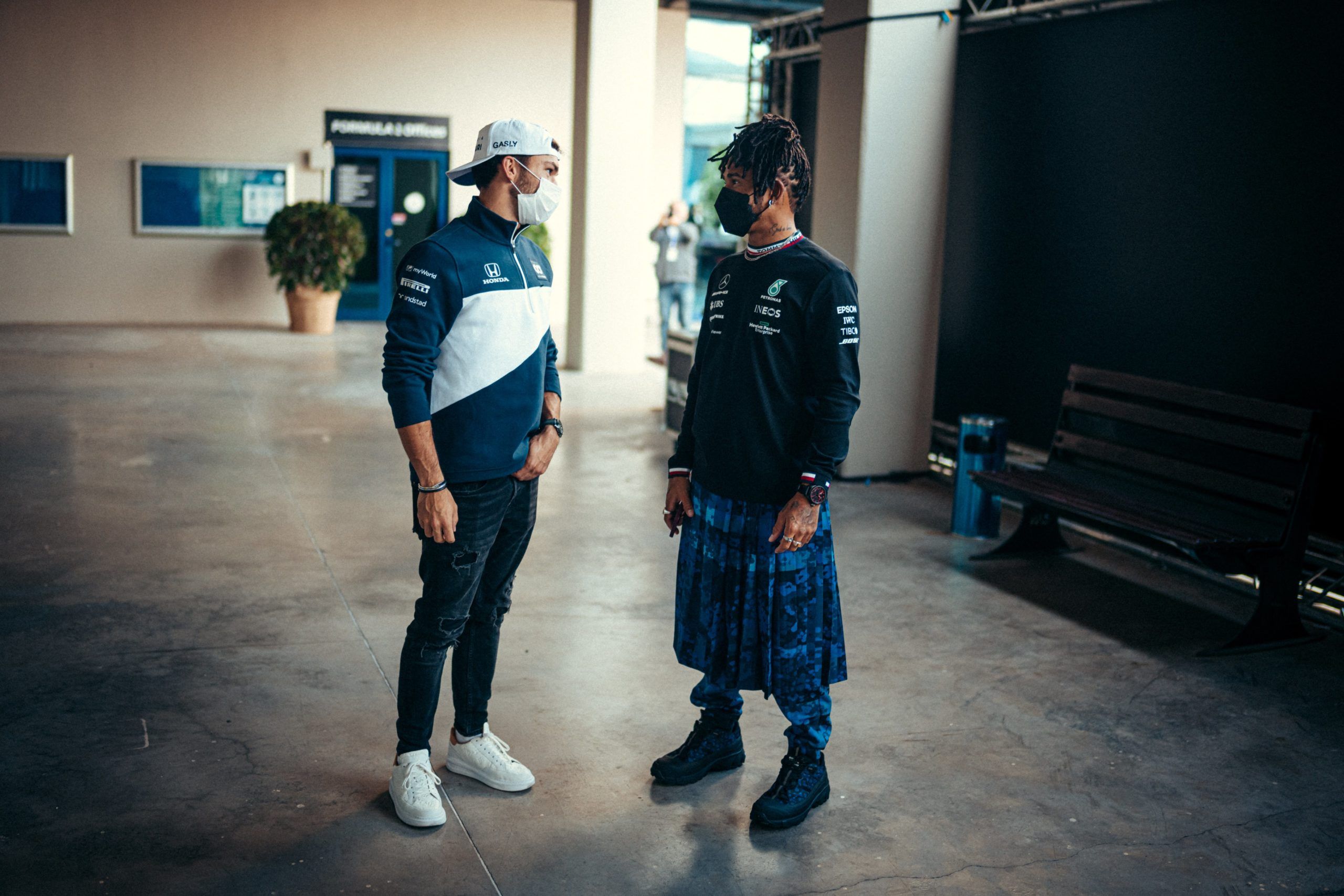 Lewis Hamilton talks of how he balances the fashion life he pursues to take a break from F1 and also pushing ahead for world titles.

There was a time when Mercedes’ Hamilton made time between races to visit fashion shows and show himself up to the world, taking the F1 mantle to different places. Ever since the pandemic hit, it naturally slowed down to bare minimum.

After last year’s no-shows, Hamilton is back on road albeit slowly. He not only went for the MET Gala in the USA, but found time to be at the Paris Fashion Week too. Over the season, he wears some fashionable clothes in the paddock too, especially on Thursdays.

Despite the fashion life and many more things that Hamilton does, his motivation for the F1 world title remains the same. He shows to the weekends and does the job day-in and day-out. It isn’t an easy thing, but the Brit reckons doing it helps him in his game.

“I think I went there a long time ago, to my first fashion show,” said Hamilton in the press conference when asked about the recent Paris visit. “And I think it’s a much different world naturally to F1. Our world is obviously not focused on that. and it’s obviously very corporate, and there is no fashion actually in F1.

“So, I don’t know, I always felt like it was always a place that it wasn’t easy to be yourself. And when I went to a fashion show, when you’re in the fashion week for example, you’re surrounded by people from all different walks of life, expressing themselves in different ways, and I love that environment where I’m able to be able to express myself.

“I now do that on the racetrack and I feel free to be able to do so. But the fashion weeks, I mean, I only went to one fashion show, I didn’t go to anywhere near as many as I have done in the past. I love being able to separate from the sport, the intensity of this whole season is difficult for everyone that’s at the track.

“And so to be able to have something else, another outlet, something else that you can focus on helps take the weight off it. And so when I come back, it always feels fresh when I come to a GP, because it’s not something I’ve been thinking about every single day,” summed up Hamilton. When asked to elaborate on if it is hard to concentrate on pushing for a world title and also his fashion interests, he stated about using it as a motivation.

“The most important thing is always to be able to come back into the racing environment, fresh, recovered, positive, and not really having any worries,” said Hamilton. “So I think, I am able to arrive and just love doing my job. So we just take one week at a time and one race at a time, just always trying to elevate, spent plenty of time speaking to the team about how we can advance and improve.

“I’ve been doing this a long time, so I found ways personally and it’s what works for me what worked for everyone, but I found a way that I know how I think, what gets me on course and what can put me off course and so, stick to them. I think it’s not a case of ignoring the world title fight, because it’s there, but it’s the understanding what will be will be.

“All you can do is prepare the best way you can and all you can do is give it 100% and what’s coming up is coming up. So, I just don’t worry about this things. I’ve been very, very fortunate in the past, I have had lots of ups and downs, but had an amazing time, a lot of growth. So, I just don’t worry about what if, that’s up ahead. I just try and prepare for now and that means making sure I’ve done the work with the guys back at the factory, with Bono and the team.

“Then, ultimately, we just have to enjoy it. You know what an amazing season it’s been so far it’s been, it’s been super exciting for fans, massively engaging with Netflix around the world, new people coming in. We finally see two teams neck and neck, which is amazing, and of course we want to win, but you got to learn to let that not overtake everything in your life,” summed up Hamilton.

Here’s Toto Wolff on Mercedes needing to be aggressive