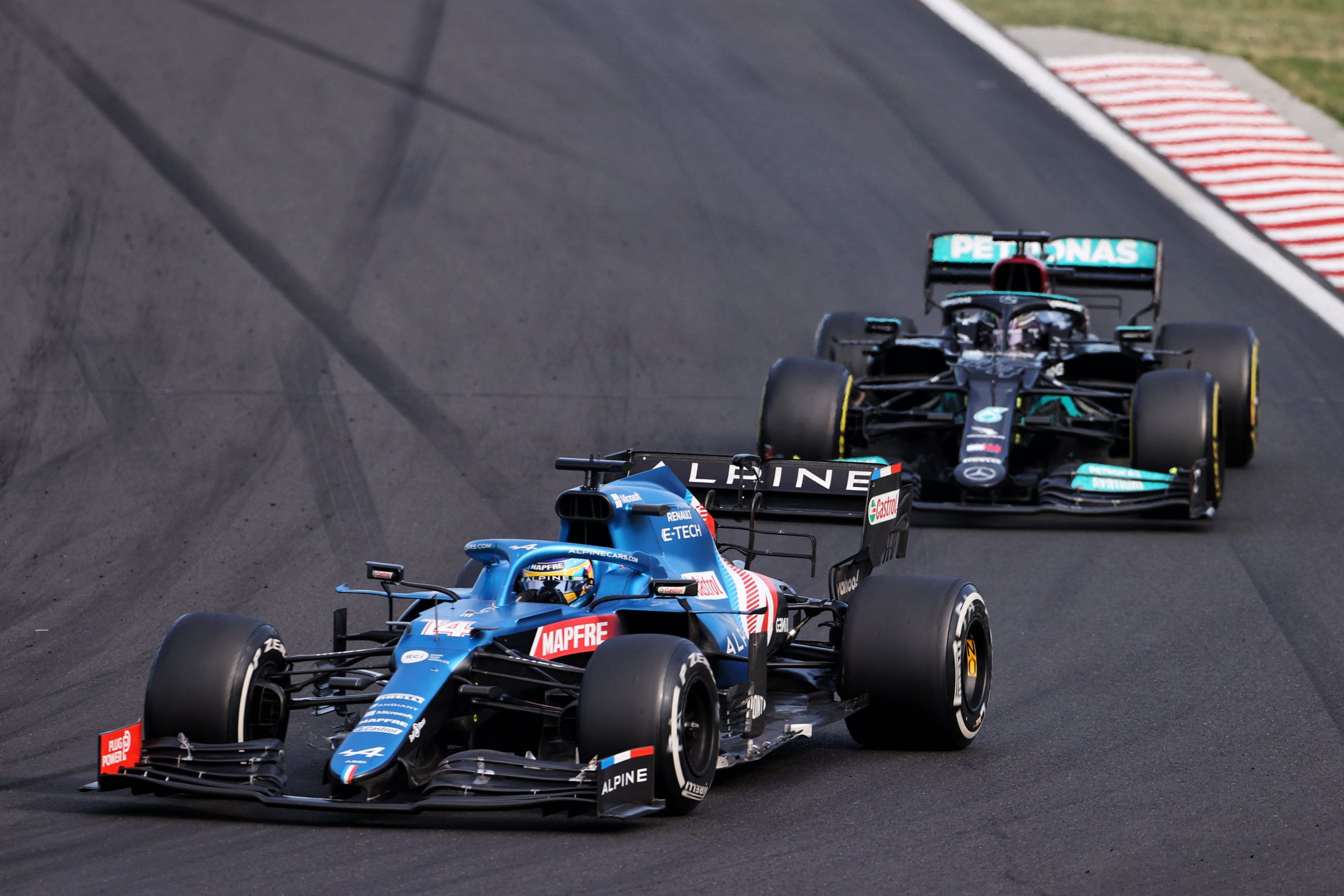 Lewis Hamilton was quite chuffed up after the fight against Fernando Alonso in F1 Hungarian GP, as the Spaniard expands on his Lap 1 touch.

It was the first instance since the comeback of Alpine’s Alonso that he got to fight against Mercedes’ Hamilton for track position in F1 Hungarian GP. The Brit certainly did not have it easy in the grand prix as the Spaniard was a huge wall in front of him.

Hamilton even came on the radio to note about some of the lines Alonso was taking, but it didn’t deter the two F1 world champions to go at it. The Brit was certainly faster, but the Spaniard held him back, which eventually helped Esteban Ocon ahead.

Having had the fight against Alonso, it took a lot from Hamilton, but overall he was quite happy that he had one. “Fernando gave me hell out there,” he said. “It was awesome racing, pretty on edge at least once but great racing. Now, looking back on it, it was amazing. It really, really was fantastic. I wish the cars could follow closer and excited for what the cars are like next year.

“Hopefully that eradicates a lot of that bad drafting that we have here. But yeah, it’s a really difficult circuit to overtaken in general, and to follow particularly in that last sector but great, great wheel-to-wheel battles. It literally was wheel-to-wheel at least once and yeah… I don’t really have much more to say about it.

“When you’re racing against a two-time World Champion he probably is one of the hardest drivers – but fair. I’d say Hungary was a little bit over on the limit,” summed up Hamilton. It was similar thoughts from Alonso, who enjoyed the fight with a front-running driver than having a go in the latter half of the Top 10.

“Honestly I felt that that was having much earlier than what he did, in the first lap I was already this was close, this was the closest you know at the high speed, I tried to give enough space but not too much space, because then he will pass,” said Alonso. “I don’t know I think that Lewis was making small mistakes in the last corners, that’s my honest opinion.

“And because he had so much space, and you cannot take eight laps to pass with that pace advantage, and in fact, after changing a few lines he could pass Carlos immediately one lap later, so he was not difficult to pass in my opinion, he took four or five laps to figure it out, that’s my opinion but I don’t know,” summed up Alonso, who noted that Alpine did not ask him specifically to defend against Hamilton, keeping Ocon in mind.

“No, the team didn’t tell me anything but I knew more or less what the situation of the race was,” said Alonso to written media. “I was looking at the bigger screens, I knew that Esteban and Vettel were fighting and they were like two corners in front of us and with 20 laps to the end and Lewis coming 2 or 3 seconds faster that was enough to win the race probably.

“So, I knew that every lap I could hold him behind that was goal for Esteban’s win and secondly, I thought honestly that I could not hold him more than 1 or 2 laps but on the last couple of corners he seemed to struggle a little bit to follow me and then it was enough to open a gap on the straight and defend.

“I think he learned a couple of different lines in the last 3 corners after the 10 laps behind me and he was able to pass Carlos just in one lap applying those new lines so that was it,” summed up Alonso, who then revealed of a touch he had after Lance Stroll clashed with others on Lap 1, which fortunately did not hurt him hugely.

“No, not that damage, the car was fine I was just, lucky,” said Alonso. “Unlucky in a way I think I had the pace to win the race probably, what it seems when you see the race prace but on the other hand I was lucky not to finish my race in Turn 1 like some of the people did so, we take this Top 5 its my best result of the year.

“And it was not a gift because I had to fight every single lap for every single position, and I’m proud of my race and even Driver of the Day probably shows that, but hopefully in one race, I’m a little bit on the lucky part, and I can get some podiums. Last year we had three podiums in the team, this year we have now one podium.

“Al of those needs to come with some special races, we know that because by pure pace we cannot achieve it , but hopefully in the remaining races some of these special circumstances come and maybe one time I’m on it and I can enjoy as well,” summed up Alonso.