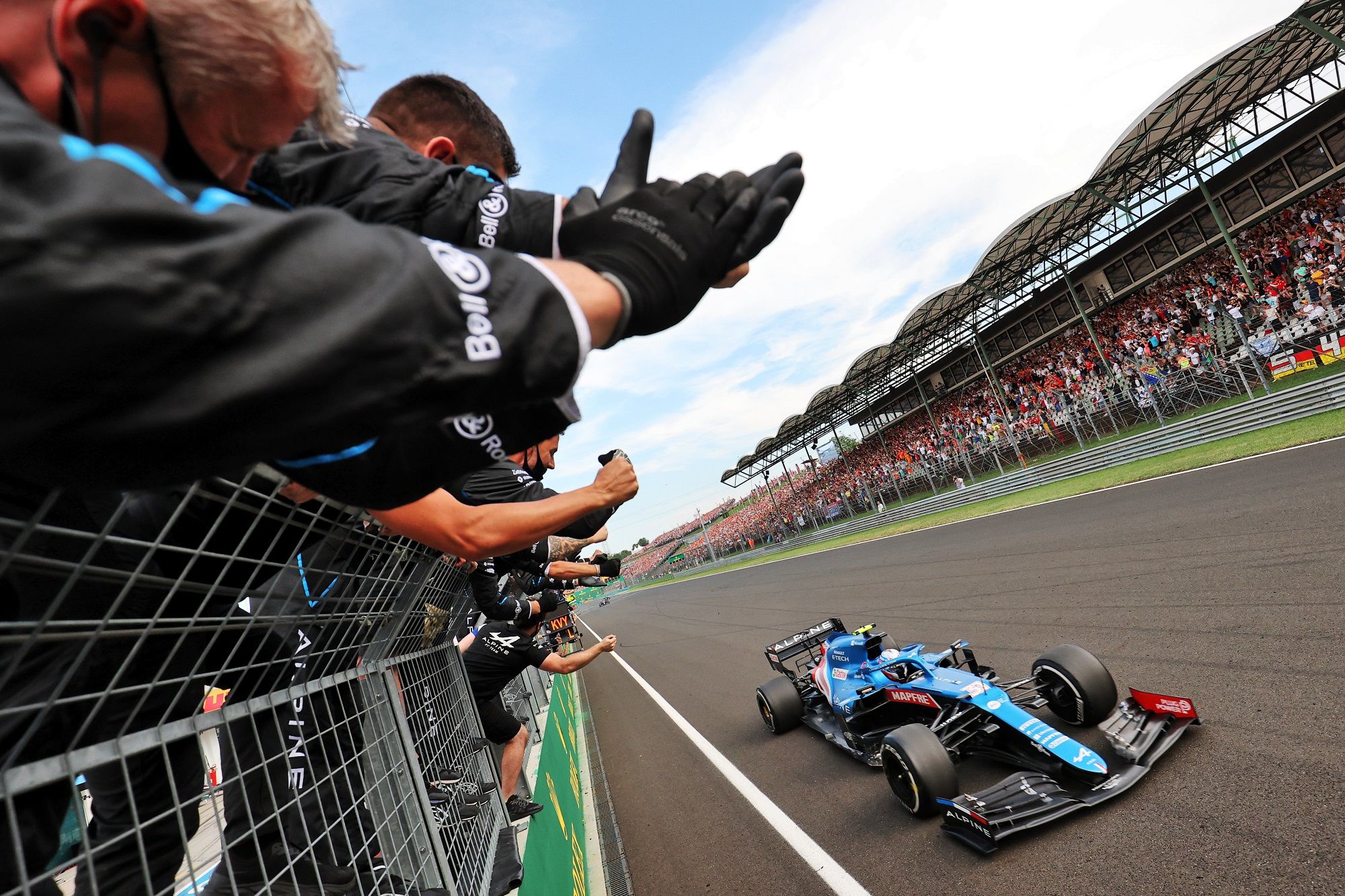 Esteban Ocon had doubts and was confused seeing Lewis Hamilton stay out in F1 Hungarian GP, as he thanks ‘lion’ Fernando Alonso.

The F1 Hungarian GP weekend held great promise for Ocon, who came home with his first-ever win for the Alpine team. It was a historic moment and showed a great deal of sportsmanship and team spirit all-around in a chaotic grand prix.

Ocon got through the initial Lap 1 trouble and was already in the Top 3 when the race was red-flagged. The rain stopped by then and the track started to dry out pretty quickly. Everyone decided to keep the intermediate tyres for the second formation lap.

But by the end of it, everyone bar Mercedes’ Hamilton pitted to switch to slick, which for a moment confused Ocon, leaving the Brit on the grid alone. He stated that even though Alpine switched him to slick tyres, he felt unsure as he knew Mercedes F1 team rarely made any mistakes in strategy.

Nevertheless, Ocon committed to his strategy, which eventually was the correct one. “There was a lot going on, for sure,” he said in the press conference. “When I saw Lewis going on Inters, I saw Sebastian behind on Inters, I felt quite relaxed because, from where we were, there was quite a lot of water still, clearly – but the sun came out and basically the track was drying at such speed that we were not expecting I think anybody.

“So, we arrive into Turn One and it was dry already. So I said to the team because it’s another start after the red flag, so you are able to talk. If we were not able to talk, probably would have been a different story. But yeah, it was clear to me that it was dry, so I was discussing it with the team what to do.

“What put me in a bit of doubt was Lewis continuing straight – because Lewis and the team, Mercedes, they usually don’t make mistakes at all, so yeah, I got a bit in doubt once that happened, but it was definitely the clear thing to do, so we box. Great pit stop by the guys, I came back in front of everybody at the line and yeah, got the Medium.

“It was working straight away; it was quite warm out there. I was quite slow to react because I never did a start from the pit lane like this, it was my first one, so I thought he was allowed to overtake, so I didn’t say anything to the stewards or the team. I though George reacted better than us and passed us. So, I was ready to fight – but apparently, it’s not allowed. So, yeah, I got the lead back after that,” summed up Ocon.

The situation post red flag must have put most drivers in a hint of confusion when the seven-time world champion stayed out, however the decision to pit for the dry tyres was the optimal one, sending Hamilton to fourteenth after he pitted a lap later.

This gave Ocon the edge during the race, as there was no Hamilton there to challenge him. An impressive recovery drive however, saw the Brit in sixth position, right behind Ocon’s teammate Alonso, whom he had to pass to catch the Frenchman for the win.

The deal was, if Hamilton was able to pass Alonso, there would be nothing challenging the lead for him. However, thanks to an alien-like defending from the Spaniard, the Brit was held back for just enough time to let Ocon retain the lead ahead of Sebastian Vettel.

Post-race, Ocon expressed his sincerest thanks to Alonso, as the two shared a wholesome moment of sportsmanlike embrace in the parc ferme, where the Spaniard waited long for him. “It is an awesome moment in my career,” he said. “I don’t have words to describe it – but it’s the first win for the Renault Group since they came back in Formula 1.

“After what we’ve been through, after the difficult times, just the trust that they’ve put in me, I’m glad that they get this reward. I also want to say a special thanks to Fernando who has been fighting like a lion in that race, because that probably contributed also to giving us a gap, giving us a bit of a breather.

“I said it to many different press out there, I received a lot of bad comments about Fernando before he joined the team and I tell you that we are forming a great duo together, we are pushing the team in the same direction and hopefully it’s the first win of many for us and hopefully we can share a podium in short moments,” summed up Ocon.

The French team has shown great promise in the last few races, and if one were to take the word of Alonso and Ocon together, the performance for the next races is guaranteed. Will the team graduate to a front runner? Or will it stay as a strong mid-field competitor with hopes of more podium finishes.