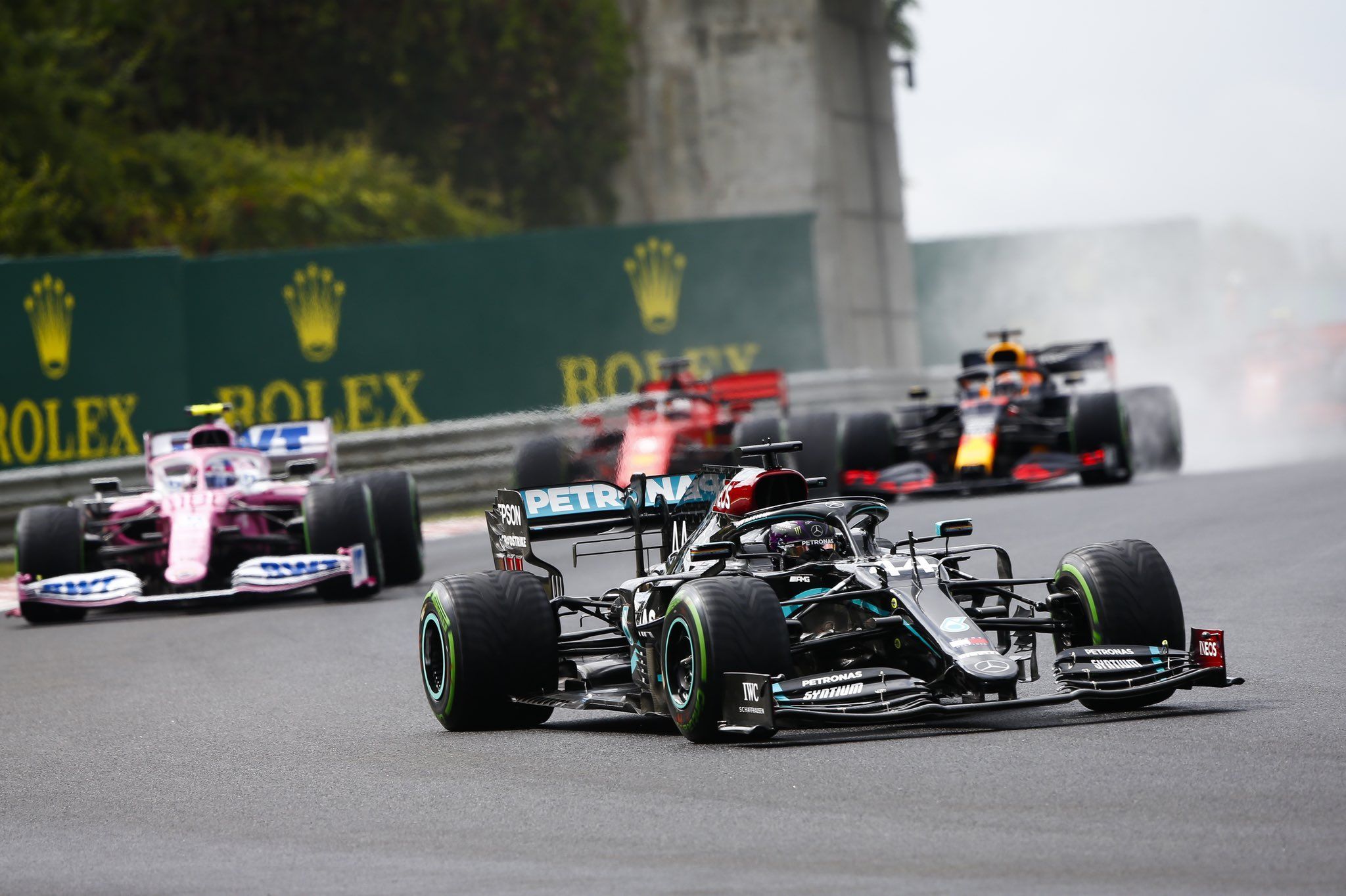 Lewis Hamilton and Max Verstappen discuss about starting in slippery conditions as they found during the F1 Hungarian GP at Hungaroring.

There are 20 drivers on the F1 grid and of these, two have recently enjoyed stand-out drives in the wet: Mercedes’ Hamilton and Red Bull’s Verstappen. Both of them have had remarkable performances in rain, such as Germany 2019 for the latter and – more recently – the Hungarian GP for the former, though this was more so in changeable conditions.

A crucial element to the race of Hamilton last weekend was the start, upon which he pulled a gap of almost three seconds to the car behind, though his impressive interval would have undoubtedly been helped by the fact that his teammate had a poor getaway, and was therefore unable to fight.

Hamilton – currently presenting himself as the favorite for this year’s title – provided an insight into how he achieved the feat and many others like it, as he explains how he deals with starting a race in wet conditions.

“Every time we do those starts, sometimes people are on your tail and you feel like you’re on the limit and obviously you’re slightly wooden or the other person is finding more grip and then there are sometimes you just pull these gaps and the others are – I don’t know – caught sleeping or just not as comfortable, whatever you want to say,” said Hamilton.

“I think, me personally, it was, as I said, very, very slippery in those laps to the grid, really helped me gauge where the track was but already when we started that lap it dried quite a lot even from doing those laps to the grid and we waited, just in 15 minutes or whatever, it had dried quite a lot and there is this balance of going over the limit and easily risking it.

“It’s not a sprint, it’s a marathon race, so you’ve really got to be cautious not to throw it all away and of course when you’re in the lead, you don’t have any turbulence from the car ahead so it makes it a little bit easier to manage it and try and find the right balance.

“When you’re behind other cars like Max was it’s a lot harder but we were just talking just now how great his start must have been to go down the outside of everyone and not. I don’t know what everyone else was doing on the inside to leave a gap completely open for Max but I know what that feels like.

“I think my first Grand Prix in Melbourne, everyone was on the inside and I went round the outside and so I empathise and know what it’s like to see that window and go for it and he obviously did a great job to recover from the laps to the grid,” summed up Hamilton.

Verstappen may not have won the race – having come second to Hamilton – but he, too, had a spectacular start, especially after the pre-race crash and one that saw him go from his grid spot of seventh to third within just two corners, as he made the most of the opportunities at hand.

The Dutchman explained that when starting a race, he operates on instinct, as one can never truly prepare for a start – particularly a wet one. “I think it’s like a bit of feeling instinct,” said Verstappen. “You can’t plan this before you go into a race like never. Every start is different. Of course you can look at previous starts or whatever, gives you an idea of what can happen and what can go wrong but every start is different.

“Of course, every year you’ve got different cars around you so just anticipating and then yeah, the start itself was pretty decent but then I at one point going to the inside so I knew of course there was going to be a bit of kind of a traffic jam into the corner so I was going round the outside, I know there is grip anyway, I think I’ve done enough wet laps around here that I know there is grip there  and it worked out.

“Everybody was focusing on the inside, trying to block each other and, I could just go around the outside. That also makes your race because if I would have stayed in seventh then suddenly you’re really in for a struggle to try and get past those cars so once I got into third I could see I was faster than the Racing Points so they boxed and I continued one more lap and I think that was a good call, to jump them.

“Because also you don’t want to go too quickly to a slick, you don’t want to be the first one and risk that when you are in the top three and so doing one extra lap… it never really hurts that bad,” explained Verstappen. The Dutchman wasn’t scared with regards to his pre-race incident at Turn 12 as well and took it as normally.

Here’s Max Verstappen explaining what led to the crash