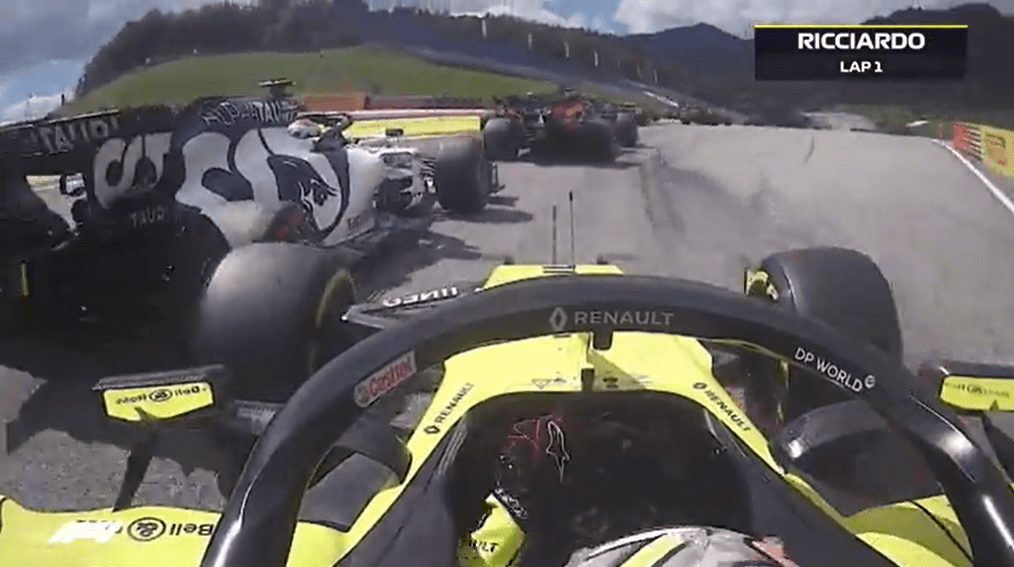 Pierre Gasly says the opening lap brush with Daniel Ricciardo affected his pace in F1 Styrian GP as Kimi Raikkonen reveals fuel saving as a reason for no push towards Daniil Kvyat.

The original broadcast of F1 Styrian GP did not show the collision between Gasly and Ricciardo but replays showed the brush between the Australian’s front-left and the Frenchman’s rear-right. The AlphaTauri racer did not lose a lot of ground still.

He was inside the Top 10 but under extreme pressure from McLaren and Racing Point drivers. They eventually got him as Gasly switched to a different strategy of using the hard compound. It didn’t work, leaving him to do another pit stop.

He eventually ended up 15th as he stated that the rear did not work at all, leaving him with no pace in the race. “It was a very disappointing Sunday after a great Qualifying,” said Gasly. “We had a good position on the grid, so we were expecting to have a good race, but it didn’t start well, as I had contact with Daniel in Turn 1 and I almost spun the car.

“After that it was very tough, and the rear of the car just felt a bit strange. We tried what we could with the two-stop strategy, but we just didn’t have the pace.” His teammate, though, managed to come away with a point to register his first of 2020 F1 season.

It was a better run but he was helped by Alfa Romeo’s Raikkonen not pushing from behind due to his fuel saving measure. “Friday was difficult, Saturday was difficult but it was a fantastic race for me given a lot less cars retired than last weekend,” said Kvyat.

“I can say, I repeated my own performance, I am happy bringing the car home in points which was hardly fought in a well-executed race. I was always under attack from someone, whether it was Haas, Alfa Romeo or even Gasly, it was a close fight.”

As for Raikkonen, he ended up nearly eight seconds behind Kvyat and merely fended off the Haas duo of Kevin Magnussen and Romain Grosjean. Alfa Romeo adopted team orders as well, which helped the Finn to fight for points but fuel saving hindered his chances.

Additionally, Raikkonen also lost out at the start when he had to brake hard to avoid the Ferrari clash. “We actually had a pretty decent car and our pace was definitely a step forward, so it’s a bit frustrating not to be able to fight for the points,” he said.

“I lost a lot of time at the start, having to avoid the crash between the two Ferraris. I had to nearly stop, the car went into anti-stall and I couldn’t get it out. In the end, I managed to recover into a good position but I had to save fuel in the last 20 laps.

“So, I couldn’t push to catch Kvyat. On pure speed, I feel we could have got to the points but we fell a bit short. We get another chance next week so hopefully we will have a better end result then,” summed up Raikkonen.

Here’s Lap 1 onboard to see Gasly and Ricciardo clash: https://www.formula1.com/en/video/2020/7/Styrian_Grand_Prix__First_lap_onboards.html

Here’s a pass from Raikkonen and Latifi: https://www.formula1.com/en/video/2020/7/Styrian_Grand_Prix__Raikkonen%27s_stunning_pass_on_Latifi.html