Pierre Gasly is not too worried about arrival of Yuki Tsunoda at AlpahTauri, as he posts a picture of the painting he got reflecting 2019 Brazil GP moment.

With Gasly taking the more experienced driver role at AlphaTauri, he will have a fresh challenge in the form of Tsunoda in 2021. The Japanese is all ready for his F1 debut amid much hype due to the performances as a rookie in 2020 F2 season.

For Gasly, Tsunoda will be his fifth different teammate in F1 after Carlos Sainz, Brendon Hartley, Max Verstappen and Daniil Kvyat. In a head-to-head battle, the Frenchman has not lost to any when taken the full year into consideration, which happened in 2018 and 2020.

In those fights, it was more Gasly trying to prove his mettle but with Tsunoda, it will be the Japanese racer trying to get one better than the Frenchman, in order to raise himself up in the eyes of Red Bull, especially as a rookie, which certainly has a larger impact.

For Gasly, it will be business as usual, as he is not too worried about Tsunoda but his own performance. “I am not so much [worried],” he said to media including F1, Racefans.net, Motorsport Network, BBC and more. “I know what I’ve got to do. It is clear. I think it doesn’t really matter who is alongside me in terms of my own and personal performance.

“I know I need to deliver the best of myself and the best for the team with the car I am given. Obviously, I’m happy to take more stability. I think 2020 was great with Dany, in fact, over the last 18 months the way we worked together, the way we pushed each other together, the way that – he’s got a lot of experience in F1 – so I think we’ve managed to push the team forward in that aspect, based on his experience and based also on mine.

“So this has been really good. Honestly I didn’t have much to say on the second driver. It was all up to Red Bull, but I feel that on my side, I put a lot of expectations on myself. And I want to deliver at my best level all the time. So yeah, this won’t change for 2021,” summed up Gasly, as the Frenchman is set for a crucial year in terms of his own future, whether to stay with Red Bull or look for a seat elsewhere.

In other news, Gasly shared a painting gifted to him by artist Remi Bertoche, which captures the 2019 Brazil GP moment on the finish line, when he was fending off Mercedes’ Lewis Hamilton, in the fight for second place in a thrilling finish. 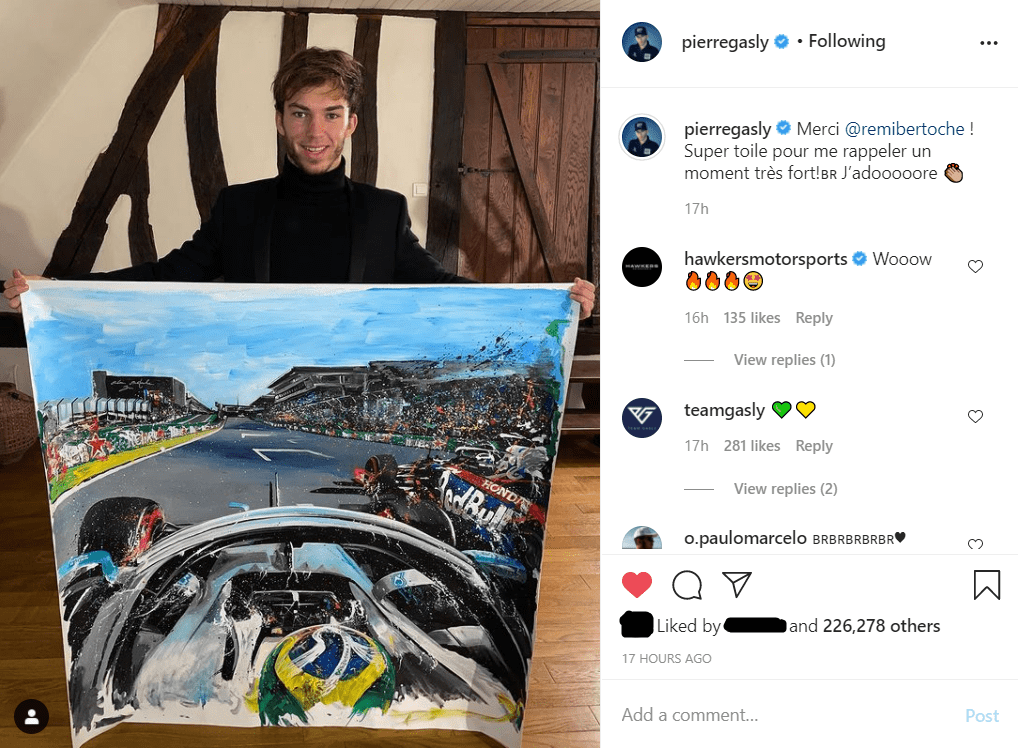