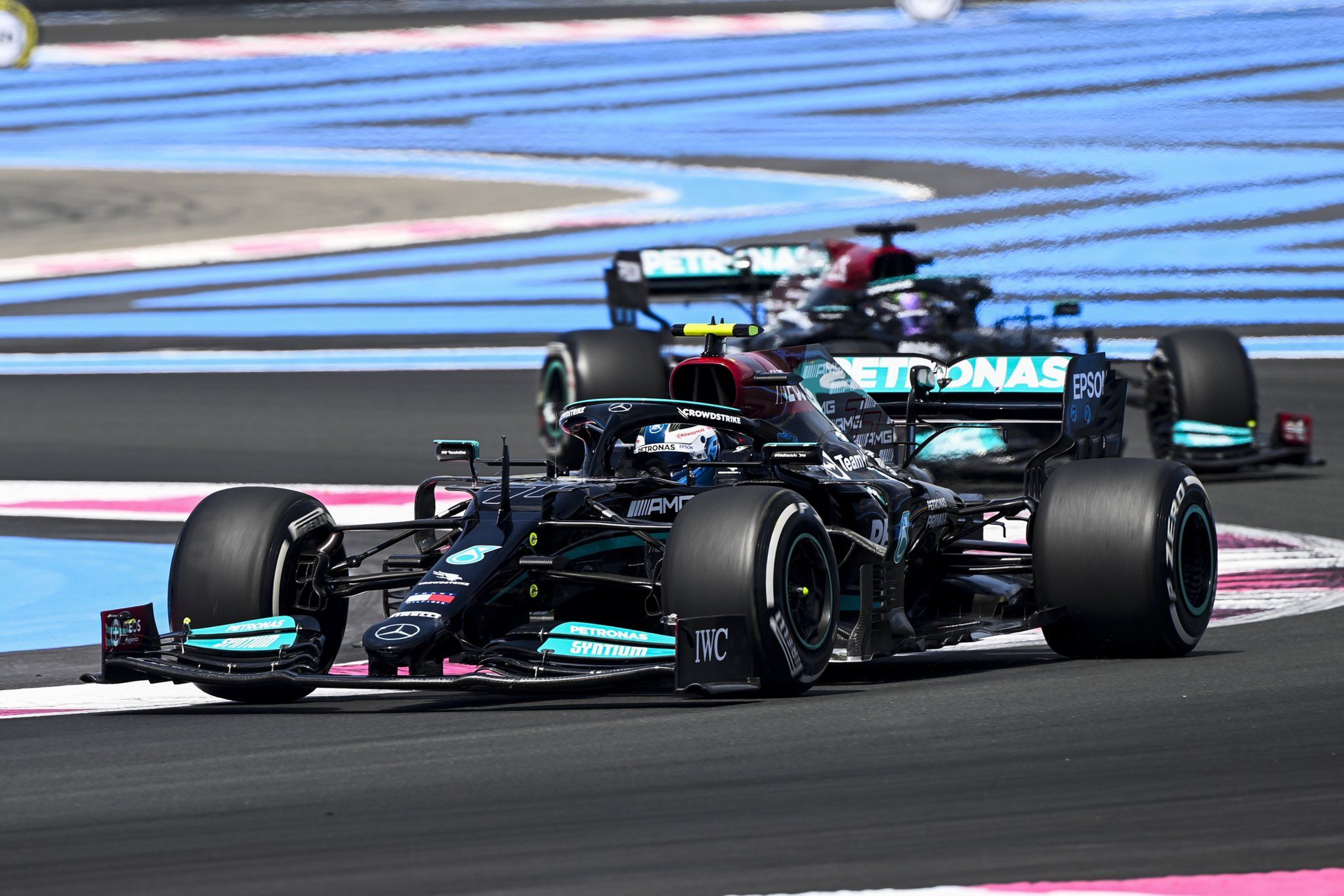 Mercedes were back on top with Valtteri Bottas leading Lewis Hamilton in F1 French GP FP1 from Red Bull pair of Max Verstappen and Sergio Perez.

After two street tracks done, F1 was back on a traditional circuit at Paul Ricard, which saw Mercedes top the standings in FP1 of French GP, with Bottas (1m33.448s) leading teammate Hamilton (1m33.783s) in a 1-2 finish, where they had Red Bull just behind.

Bottas did not have a clean run after going off the sausage kerbs in the final corner, which damaged his floor and also the front wing of his new chassis – previously used by Hamilton. He was forced to change the wing, as Mercedes complained to Michael Masi.

He was not the sole to have an off over the kerb, with the likes of Alfa Romeo’s Kimi Raikkonen, AlphaTauri’s Pierre Gasly and Ferrari’s Carlos Sainz, also having a moment over the same kerb. It brought back some of the discussions with track limits.

Hamilton, meanwhile, had a somber session ahead of Verstappen (1m33.880s), who had a fast lap but complained about some issues. He led Perez (1m34.193s), who couldn’t improve on the soft tyres, as Alpine’s Estebon Ocon (1m34.329s) slotted in fifth.

Fresh after a new contract, Ocon struggled initially, but managed to set a solid lap towards the end ahead of McLaren’s Daniel Ricciardo (1m34.644s), who pipped the other Alpine of Fernando Alonso (1m34.693s), late in the French GP FP1 session.

Tsunoda did not have a best start to the session, though, after a spin in the final corner, while at the end, he had to save himself from getting hit while getting out of the pits, where one of the cars drive past him at racing speed, very closely.

Outside the Top 10 was Ferrari, who did not have a good run, with Charles Leclerc only 11th after complaining of lack of grip. He led the Alfa Romeo pair of Antonio Giovinazzi and Raikkonen, with the Aston Martin pair slotting in 14th and 15th.

It was Lance Stroll ahead of Sebastian Vettel, where the German had an off after losing his rear at the hairpin and hitting the rear on the barrier. He managed to continue into the pits as Ferrari’s Sainz also had an off, flat-spotting his tyres hugely.

His best time was set on the hard compound in 16th, with Williams’ Nicholas Latifi in 17th from Haas pair of Nikita Mazepin and Mick Schuamcher, while Williams’ Roy Nissany rounded out the 20 runners in the F1 French GP FP1 session.

Nissany stepped in for George Russell and had a quality session despite minor offs. Schumacher, meanwhile, started the session with a spin and took a bump onto the barrier, while Mazepin’s run-in with his F1 rivals continued.

Mercedes back on form, with Red Bull just behind

And a strong showing from @AlpineF1Team in the opening session at their home race 🔥#FrenchGP 🇫🇷 #F1 pic.twitter.com/rUs0beKoQI