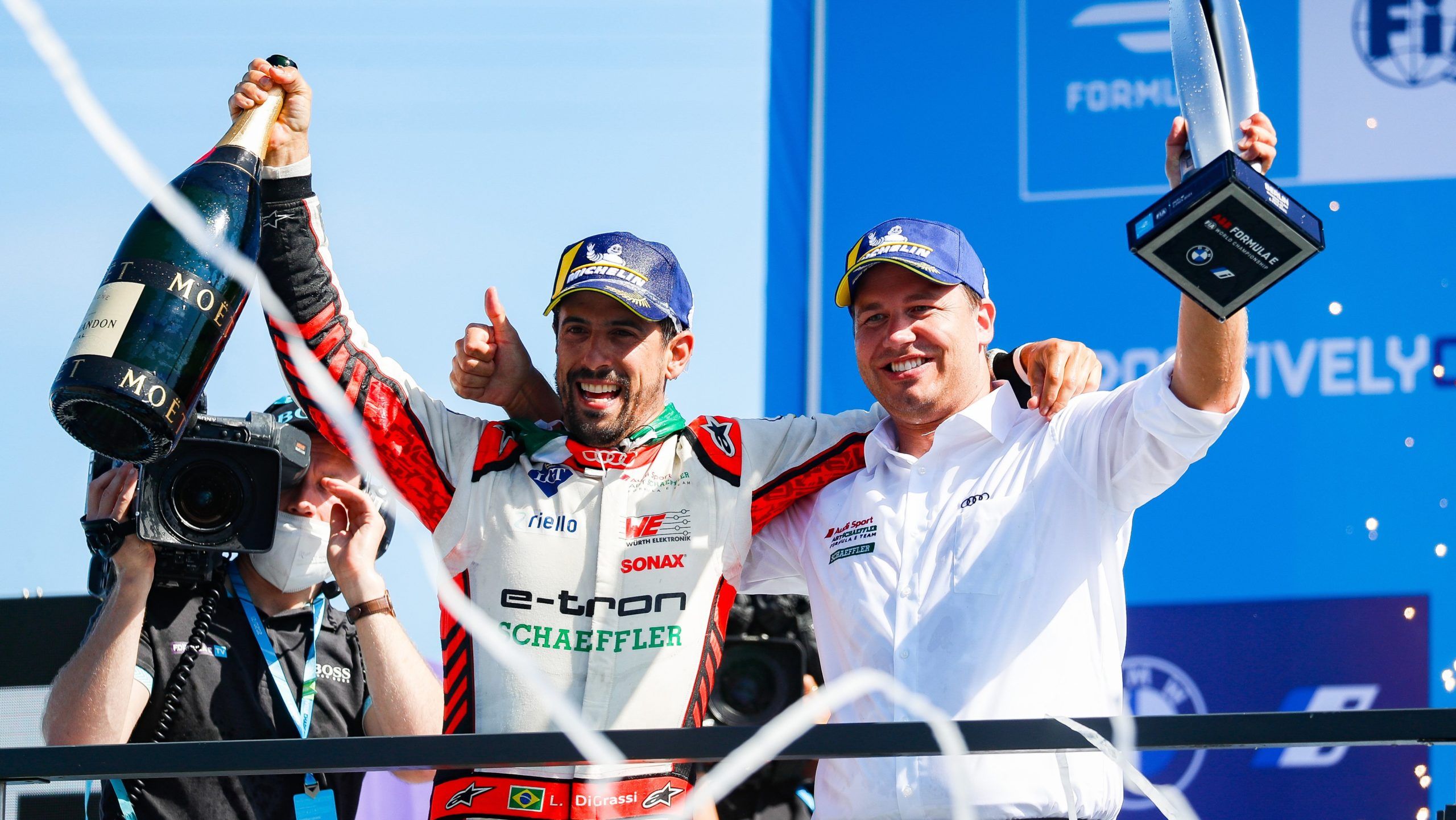 Lucas di Grassi teed up what will be an enthralling final round of the 2020/21 ABB FIA Formula E World Championship by sealing the race win for Audi Sport ABT Schaeffler in the BMW i Berlin E-Prix presented by CBMM Niobium Round 14. The Brazilian measured his use of the 35kW ATTACK MODE boost to perfection to pip ROKiT Venturi Racing’s Edo Mortara over the line while Mitch Evans (Jaguar Racing) came home third.

Di Grassi started on the second row behind DS TECHEETAH’s Antonio Felix da Costa and Jean-Eric Vergne, who led for two thirds of the encounter. The DS drivers then lost out to the charging Audi duo, led by di Grassi, with teammate Rene Rast flying from 12th to second spot. After the Audis hit the front, ROKiT Venturi Racing’s Edoardo Mortara and Norman Nato then jumped the pair through their ATTACK MODE boost. Da Costa slipped to an eventual sixth and Vergne seventh, while Rast’s charge wouldn’t last as he fell to ninth.

Di Grassi was late to take his ATTACK MODE activation and the wily racer made it count. He passed Nato then Mortara in the closing stages and held off the latter over the line for the race win with Evans steering to an impressive third from seventh on the grid ahead of Nato fourth and Jake Dennis (BMW i Andretti Motorsport) fifth.

Standings leader Nyck de Vries (Mercedes-EQ) failed to finish, retiring to the pit-lane but through it all, he holds his advantage atop the Drivers’ World Championship, with Mortara rising to second, just three points back while Dennis sits third. Sam Bird suffered, too; his Jaguar stopping on the start-finish with a technical issue, marking a third consecutive DNF just as the Brit had a sniff of points.

Despite that, Evans’ podium was enough to see him fourth in the Drivers’ and Jaguar rise to the top of the Teams’ table, ahead of DS TECHEETAH by five points. More than half the grid can still win the title, while the top seven in the Drivers’ World Championship, down to reigning champion Da Costa, are split by just nine points

Polesitter Vergne got away well, with da Costa hassling his teammate hard into the long left hander of Turn 1. The two led away as they’d started with Evans going the long way around Buemi to jump the Swiss for sixth. It was a case of managing tyres, battery and temperatures over the first ten minutes, though di Grassi was doing his best to pressure the two DS drivers out front – the lead trio split by less than a second over much of the opening third of the race.

On Lap 8, Bird’s Jaguar slowed to a stop thanks to a technical problem over the start-finish with the Brit having made the cusp of the points – a hammer blow for his championship chances. The MINI Electric Pacesetter was deployed while the car was cleared, with the race going green at just under half an hour remaining.

A single ATTACK MODE activation lasting eight minutes was the added variable for drivers and engineers to work with instead of the more usual pair of four-minute doses of the 35kW power boost. The first inside the top 10 to jump through the activation loop were Nissan e.dams’ Oliver Rowland and teammate Sebastien Buemi – battling in eighth and ninth respectively.

The lead switched on Lap 18 at the hairpin with Da Costa moving beyond his teammate at the hairpin. Rast wasn’t done yet, either. He jumped Evans for sixth, Nato for fifth and Mortara for fourth before making his way beyond Vergne – at the same time teammate di Grassi pipped the Frenchman – for a podium spot, with the two Audis second and third. Incredible progress for the German who started 12th on the grid.

The Audis’ remarkable rise continued as the pair made it beyond da Costa for the lead, sweeping by at Turn 1 on Lap 20, with Mortara following during his ATTACK MODE activation. The Swiss-Italian then used that additional 35kW boost to bypass both Audis with 17 minutes plus one lap to run, and his Venturi stablemate Nato followed. A complete switch at the front inside a lap-and-a-half with the Mercedes-powered Monegasque team on for a stunning one-two.

All of a sudden, having led from the front for much of the encounter, the DS duo of Vergne and Da Costa were fifth and eighth. Mortara led the way heading into the final quarter-hour, from teammate Nato, di Grassi and Evans – the Kiwi making use of that extended ATTACK MODE then saw Evans capitalise to move fourth with Dennis following likewise. Da Costa had been shuffled to sixth with Vergne seventh, Rast now eighth, Guenther ninth and Lotterer 10th.

Di Grassi was one of the last to take his 35kW boost, and he made it count in consummate style as he carved by the Venturis for the lead on Lap 27. Evans’ momentum saw him battling Nato for the final spot on the podium as the race headed into the final ten minutes. He made a move stick heading out of the hairpin on Lap 30 though he couldn’t pull away from the Frenchman as the pair diced hard over the final few laps, allowing the lead pair of di Grassi and Mortara to jump four seconds clear.

A queue formed behind Evans in third. Nato, Vergne, Da Costa and Guenther were running within a second of one-another but they remained as is, with di Grassi holding Mortara off by just a tenth of-a-second for the win.