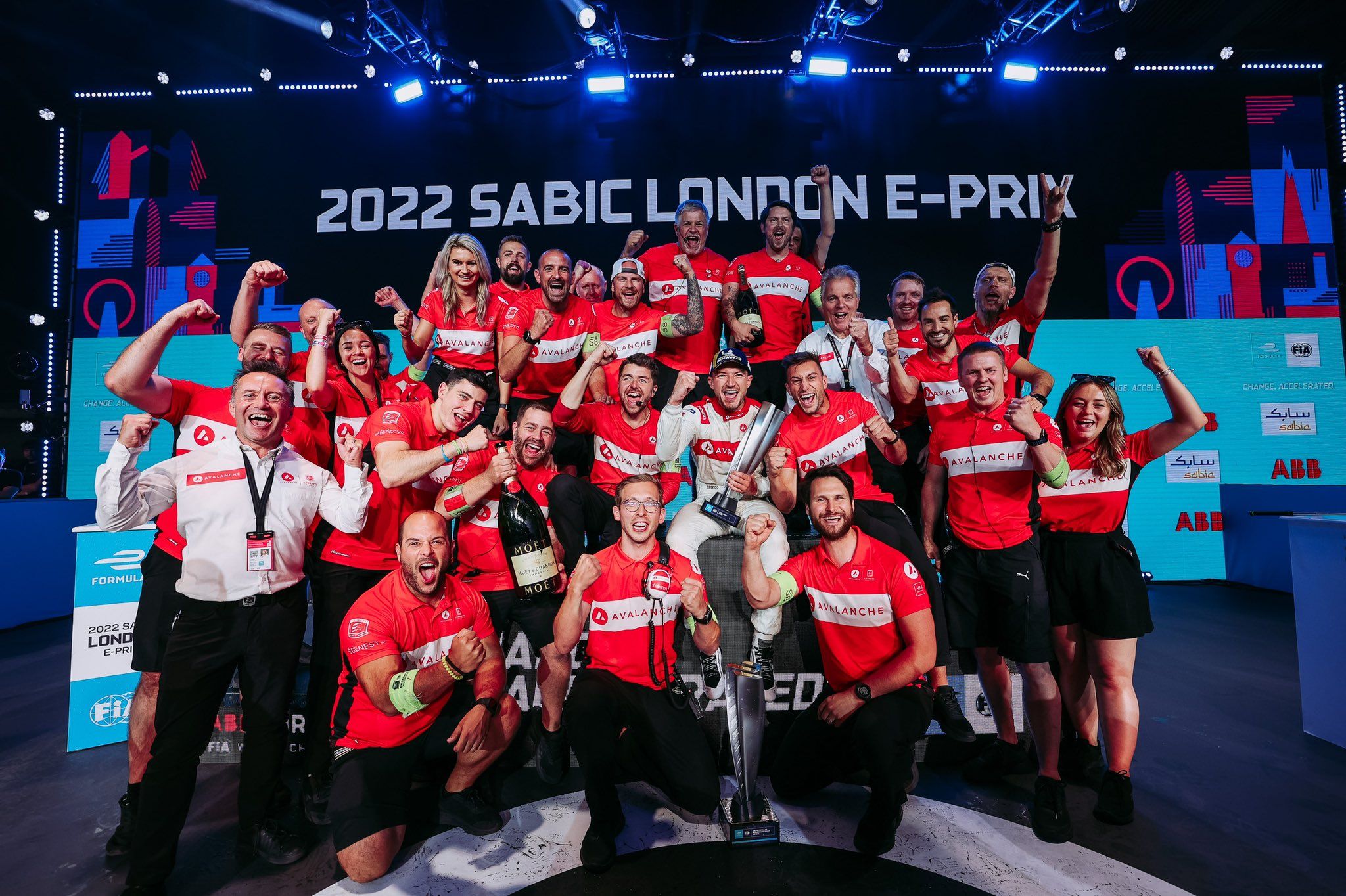 With the atmosphere bouncing in the ExCeL and the five red lights out, Dennis was immediately forced into countering Vandoorne’s advances off the line – the Brit holding on into Turn 1. As the pack filtered through that tight Turn 1 and 2 things concertinaed with both Jaguars coming together and Sam Bird (Jaguar TCS Racing) had his car half turned around amd terminally damaged. Mortara was caught up in all that, too, with his whole front wing ending up underneath and separated from his car. A pit stop was required and that meant the Swiss would likely non-score. That could well mark the end of his title tilt.

On Lap 3, it was as you were in the top eight but a lap later, Sergio Sette Camara (DRAGON / PENSKE AUTOSPORT) seized the initiative and looked on the pace up front as he sliced by de Vries for third and provisional silverware. Some move, and the Brazilian had eyes on the lead pair with nothing to lose. That same lap, Vergne clipped his teammate da Costa into the complex, leaving both outside the points as Buemi made it by. Dennis headed Vandoorne, Sette Camara, de Vries, Askew, Guenther, Cassidy, Lotterer, Frijns and the Nissan e.dams of Buemi.

Two ATTACK MODES with a six minute, 13% power boost was the order of the day, with Frijns the first to jump through the loop in a net ninth. That set off a flurry of activations with several following Frijns on Lap 7. The lead trio waited for one another to blink, though. Sure enough, all three jumped through the activation zone a lap later, with Sette Camara falling behind de Vries – who was the fastest on track at the time. The top four began to break away through that first round of activations, with Askew 1.5 seconds back with the rest of the top 10 nose to tail.

Into the second round of activations, de Vries in third and Sette Camara fourth – after the Dutchman’s successful undercut – went first, leaving leader Dennis and Vandoorne to move next and on Lap 17 they did, with the pair holding first and second. Inside the last 10 minutes plus one lap and Dennis looked to have things under control out front as he did here last year. The Brit had Vandoorne at arms’ length with de Vries third. Cassidy in the Envision Racing machine, meanwhile, was making moves – beyond Askew for fifth first and then Sette Camara for fourth spot.

On Lap 31, Evans put his foot down in a bid to close the gap to Vandoorne in the standings – dispatching Sette Camara for seventh as the Brazilian’s usable energy began to wane. Fifth wasn’t out of the question with Guenther and Askew in his sights. Evans was able to dispatch the German on the final lap with energy marginal while Sette Camara slipped to 17th as his usable energy ran dry.

Dennis took the chequered flag to the delight of the home crowd but Vandoorne will be more than happy with second – extending his lead at the top of the standings in a big way over now nearest rival Evans. De Vries steered home third, Cassidy fourth, Askew fifth and Evans sixth.

UPDATE: De Vries found himself under severe pressure from Cassidy as the final couple of laps arrived and set about keeping the Envision Racing driver at bay but his efforts were found to have been too much – the stewards adjudging him to have change direction repeatedly under braking. This leaves the Dutchman sixth, with Cassidy the beneficiary to the tune of third on the podium and some welcome silverware for the cabinet.