Jonas Folger will make his MotoGP return to as the new test rider for Yamaha from the 2019 season onward.

The German made his MotoGP debut for Tech 3 Yamaha in 2017 but was forced to withdraw from the championship after suffering through Gilbert’s syndrome. He subsequently backed out of the 2018 season as well as he couldn’t recover on time.

Folger was reported to be at Yamaha’s pit box during the recent private test at Aragon which fueled the speculation of the German joining the team in some capacity. The news was then confirmed by Yamaha’s Team Director Massimo Meregalli to MotoGP’s reporter.

“Even if we didn’t make an announcement, the choice was already made some time ago with Jonas,” said Meregalli during the FP2 session at Misano. “We asked him to join the test because he needs to learn and listen to the rider comments on the bike.”

The 25-year-old rejoins the Japanese manufacturer’s family joining factory riders Valentino Rossi and Maverick Vinales and also satellite team riders Franco Morbidelli and Fabio Quartararo to help with the development of the M1.

The test role is increasingly becoming an important aspect for a MotoGP team in the development of their bikes with majority of them wanting former riders like Dani Pedrosa who has a pending decision to make between Honda and KTM for 2019. 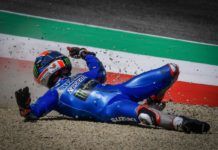