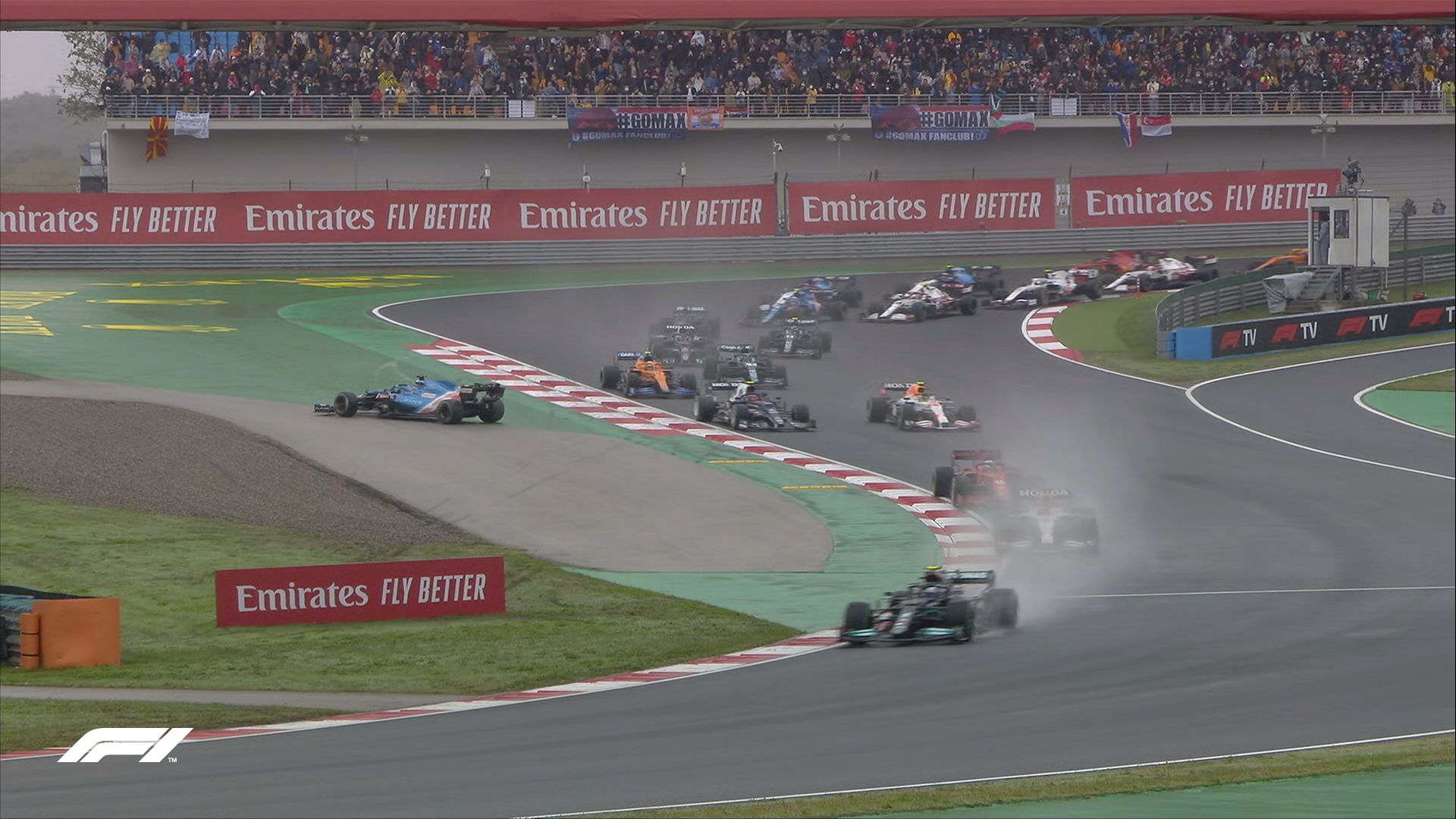 Pierre Gasly was the unfortunate middle man F1 Turkish GP which saw him spin Fernando Alonso around as the FIA explains penalty call.

It was an amazing job by AlphaTauri’s Gasly in qualifying to end up fifth on the grid (starting fourth) – a feat he has achieved many times this season, qualifying amongst the front runners. Behind him in F1 Turkish GP was Alpine’s Alonso and Red Bull’s Sergio Perez.

It was these three drivers involved in the skirmish at Turn 1, with Gasly the one to blame felt the stewards. Perez was up the inside of the Frenchman into Turn 1, he then had to leave the room with Alonso on his outside, three into one rarely goes and this was no exception, especially in greasy conditions.

With Gasly having to leave the space for Perez, this triggered some heavy understeer for the Frenchman which left him on a collision course with Alonso’s sidepod, which saw him spun round and effectively, race ruined. The Frenchman was handed a 5s penalty by the FIA stewards, much to the surprise of the driver, the fans and also the commentators.

Usually, the Lap 1 and Turn 1 incidents are seen with more leeway, but the FIA blamed him wholly for the incident. Gasly was left surprised by the decision, but used his words carefully in not agreeing with the stewards when talking after the race.

“There was contact and I haven’t really seen the footage,” said Gasly to written media. “For me, it was tight with Sergio inside me and Fernando was also on the outside, so honestly there wasn’t space, but yes there was contact. I did the penalty, I don’t know if it was the right thing or not. I need to look at the footage first.

“I saw Fernando was there, I also saw Sergio was there, and I tried to go where I could. We know it is always usually not a good mix when there are that many cars. It’s tricky. I don’t have any other similar situations that come to mind. That is just the way it is.” Just one of those things for Gasly who clearly feels the penalty was harsh from FIA stewards.

“To be fair for me, I don’t really know where else I could have gone,” added Gasly. “But I mean, it’s a tricky one. It’s turn one and obviously, it’s a high chance that something happens. I don’t want to be involved in any sort of crash that would ruin my race. So I just tried to stick with in between these two cars. But yeah, I didn’t have much space.”

It’s evident he tried his best to avoid this, no driver does this deliberately of course. Turn 1 is always tricky in Turkey, let alone in these conditions so Gasly was unlucky to see himself penalised one could argue. Alonso took a philosophical approach to the situation, but was a bit surprised by the penalty call himself.

“I don’t know, I didn’t see on TV,” said Alonso to written media. “I think the first corner is always difficult and in these conditions…we were on the wet tyres together for the first time, so these things can happen. Unfortunately, it happened to us when we are Top 5. I hope when there are contacts next time, we are behind and not ahead.”

The experienced Spaniard happy to recognise the delicate Turn 1 conditions, but like he says, it’s very unfortunate it happened during his best qualifying of the year so far. Alonso has been in the tiff with the FIA stewards, especially with regards to the Lap 1 and Turn 1 escape road usage by his F1 rivals.

The interesting aspect of the incident was the FIA note changing from ‘predominant to blame’ to ‘wholly to blame’ after the race. While the decision was of the stewards, but race director Masi explained the need for the penalty after careful check of call angles.

“If we go back to the start of the year before the first event, following discussions with the drivers and the teams we had to sort of ratchet back a little bit to let them sort out the race principles in general,” said Masi to written media. “And one of them was first-lap incidents and that if a driver was wholly to blame for an incident, then it would likely result in a penalty.” Therefore the stewards ‘determined that Pierre was wholly to blame for the incident. And as a result, a five-second penalty was imposed’.

The only potential saving grace for Gasly was the fact Perez was on his inside, but it was not enough. “So that [Perez being on the inside] was one of the things why it probably took a little bit longer at the start, to have a closer look at,” said Masi. “Obviously Sergio was on the inside, but once it was quite clear from all of the footage and everything available, that’s why they determined that it was a five-second penalty.”

Harsh you could say, but it ruined Alonso’s race and could have been avoided. Alonso wasn’t at fault, nor Perez, solely Gasly. Masi went back to the Imola call between Lewis Hamilton and Max Verstappen, which was taken in a different context.

“I think if you look at the Max and Lewis one, it’s one of those the wholly or predominantly, under our regulations,” said Masi. “For ease of interpretation, let’s call it, if someone is wholly to blame on lap one, it will result in a penalty. If it takes two to tango and it is on lap one it would likely not result in anything, or if there’s more than the two cars involved. But if it’s quite clear, two cars, one has done it, then a penalty would happen.”

It seems like a fair justification from Masi and the penalty makes sense, it’s just a very unfortunate situation for Gasly to be in. The stewards have to deliberate over whether its wholly or predominantly to determine a Lap 1 penalty. Although it ruined Alonso’s race, an experienced man is well aware of complex conditions which is why he wasn’t criticising the Frenchman too much, but for him, he still managed to finish sixth in the end.

Here’s Esteban Ocon on not pitting

Here’s Yuki Tsunoda on his spin