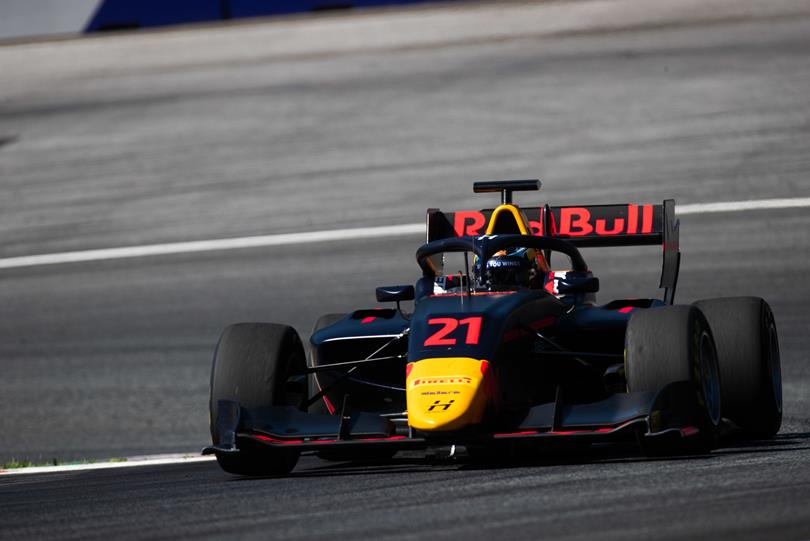 Pole-sitter and Prema’s Marcus Armstrong had a good start to F3 feature race at Red Bull Ring as he lead ART’s Fewtrell and Hitech GP’s Vips with Prema’s Jehan Daruvala stationed himself in fourth ahead of HWA Racelab’s Jake Hughes.

Behind, both Trident’s Pedro Piquet and Prema’s Robert Shwartzman gained places to be sixth and seventh respectively, as Hitech GP’s Leonardo Pulcini and Sauber Junior Team by Charouz’s Lirim Zendeli lost inside the Top 10.

At the front, Armstrong started to get under pressure as Vips made the move on Fewtrell to take second and then passed the Kiwi to take the lead of the F3 race, with Fewtrell following through to pass Armstrong to slot into second.

The Ferrari junior went from first to third and came close to be overtaken by Daruvala. Despite the passes, it was quite close at the front with none able to shed off anyone from their tail – everyone in the Top 9 were within a second of each other.

It was getting slightly frantic towards the end as Vips led the train of cars. Among them, Piquet made a move on Hughes for fifth but the British racer fought back on the same lap to regain his track position, while Shwartzman waited for his chance.

Piquet went for it again on the next lap but both went wide which allowed Shwartzman to take fifth as Hughes lost couple of places to be seventh. Just ahead, Daruvala tried to make a move on Armstrong but couldn’t make the move stick as Vips increased his pace.

The Red Bull junior eased in to score his first win of the 2019 F3 season and also a first non-Prema victory, with Fewtrell registering his first F3 podium, while Armstrong fended off Daruvala to keep the last place on the rostrum.

With Shwartzman finishing fifth, the Russian had his points lead intact with the Indian now 10 points adrift of his teammate. Piquet came home in sixth with Hughes seventh as Zendeli scored his first points of F3 in eighth from Pulcini.

The Top 10 was rounded out by MP Motorsport’s Richard Verschoor after the Dutchman won a race-long battle against Trident’s Niko Kari – the duo exchanging places for a couple of times. Carlin’s Felipe Drugovich was close behind for the Top 10 behind the two.

It was relatively sedate in the mid-pack with only few incidents but nothing major. After getting disqualified for a strange rule flout, ART duo of David Beckmann and Christian Lundgaard finished 15th and 26th after the latter had to pit due to a hit.