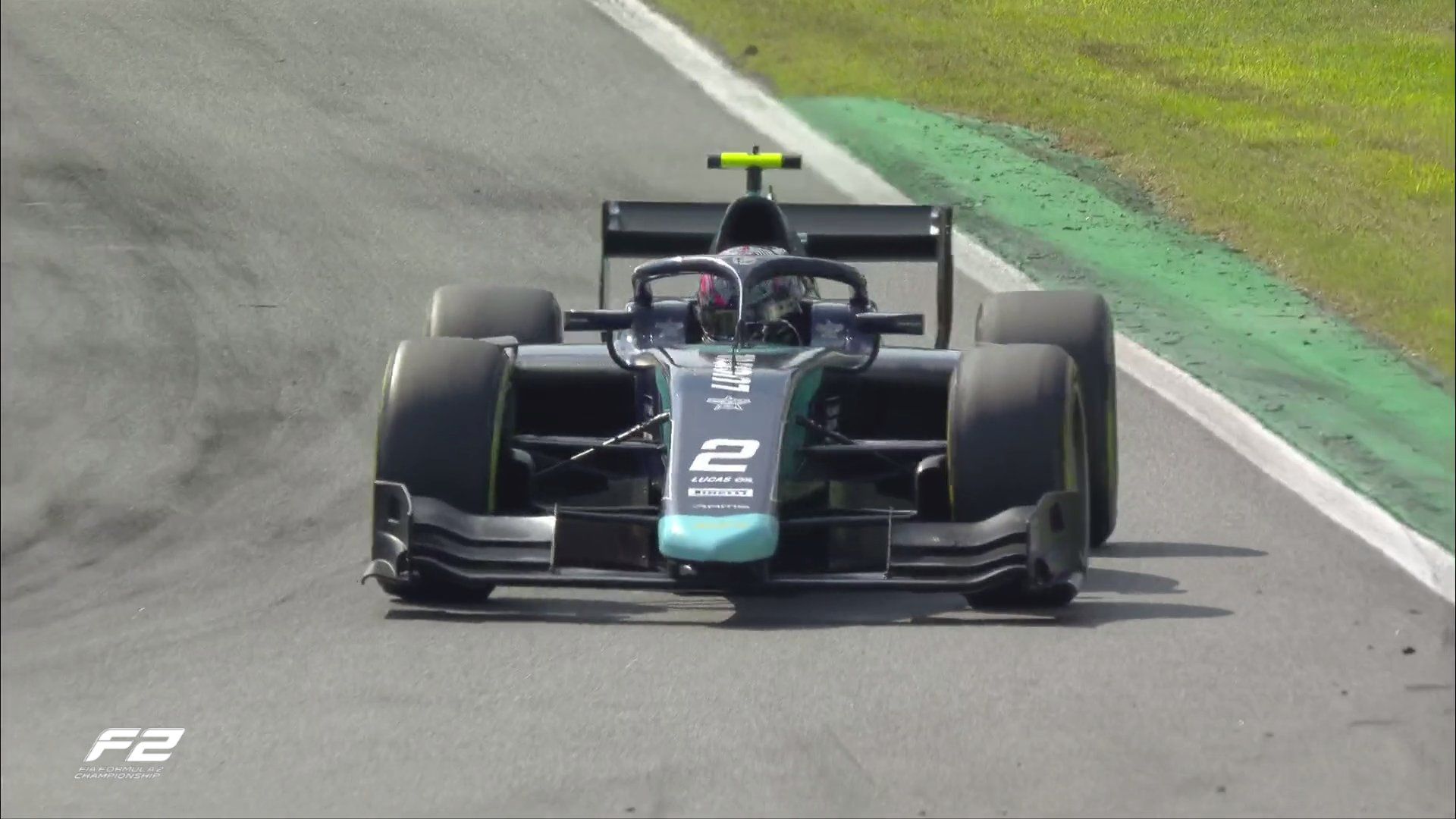 Pole-sitter Charouz’s Louis Deletraz did not have the best of starts in sprint F2 race at Monza as front-row starter DAMS’ Daniel Ticktum pushed himself into the lead in Turn 1 as UNI-Virtuosi Racing’s Callum Ilott steadied in third.

The order changed behind after a slow start for UNI-Virtuosi Racing’s Guanyu Zhou, who dropped to seventh, as Carlin’s Yuki Tsunoda moved up to fourth, ART Grand Prix’s Christian Lundgaard fifth and Prema’s Mick Schumacher sixth.

Hitech GP’s Luca Ghiotto was eighth in the final point position. As Ticktum led Deletraz, Ilott started to pressure the Swiss as things went awry behind with problems for Tsunoda, Zhou and Ghiotto – the former two having a mechanical trouble.

It was similar to how Hitech GP’s Nikita Mazepin slowed in the feature F2 race. Zhou retired but Tsunoda managed to return to the track as Ghiotto was forced to pit due to front wing damage, which Charouz’s Pedro Piquet also had.

Meanwhile, a wide moment for Schumacher, dropped him behind Lundgaard, who started to push against Deletraz and Ilott. The Brit managed to get by the Swiss racer for second as the Dane also passed him for third, with Ticktum leading comfortably.

Schumacher got on the back of Deletraz quickly in the fight for fourth as Prema’s Robert Shwarztman steadied in sixth ahead of Carlin’s Jehan Daruvala and Campos Racing’s Jack Aitken. The British-Korean had an off moment early on but came back nicely.

At the front, Ticktum checked out his rivals to win the sprint F2 race at Monza as Ilott was took a crucial second from Lundgaard with Schumacher passing Deletraz for fourth but the Swiss racer hung on to fifth from resurgent Shwartzman.

It was a lonely seventh place for Daruvala with more points as Aitken rounded out the final point position from Mazepin, who came through from back of the field to ninth ahead of DAMS’ Juri Vips, who finally broke into the Top 10.

Trident’s Roy Nissany was 11th despite a 10 second penalty for spinning MP Motorsport’s Felipe Drugovich at Turn 1, which brought the Virtual Safety Car. The other MP Motorsport of Nobuharu Matsushita was 12th from HWA Racelab’s Giuliano Alesi.

UPDATE: Following the situation where Ticktum couldn’t get in his car to the parc ferme due to fuel, the FIA looked at his sample, where they could only collect 0.5 kg instead of the 0.8 kg a car should have in his tanks.

As a result, Ticktum was stripped of his victory, helping Ilott to take the win from Lundgaard and Schumacher on the podium spots. The disqualification also helped Deletraz to be fourth, Shwartzman fifth, Daruvala sixth, Aitken seventh and Mazepin eighth.

Reverse-grid pole-sitter Charouz’s Michel Belov couldn’t hang on to F3 lead in sprint race at Monza as fourth-placed starter Trident’s Lirim Zendeli shot into the lead with HWA Racelab’s Enzo Fittipaldi coming through to second, as the Russian dropped to third.

It wasn’t long for Belov to drop down the order as HWA Racelab’s Jake Hughes crept up to take third, bringing Hitech GP’s Liam Lawson along. The fight for the lead, though, intensified as Zendeli and Fittipaldi traded places atop.

However, it ended up in a disaster for Fittipaldi after they made contact at Turn 1, with the Brazilian having to pit for rear puncture. This allowed Lawson to get past both Hughes and Zendeli to lead as the Prema trio started to make inroads from lower half of Top 10.

Trident’s David Beckmann had a heartbreak to retire due to an issue as the title fight was left open when Prema’s Oscar Piastri was hit by Carlin’s Clement Novalak. Just before the Virtual Safety Car was deployment, Hughes took the lead from Lawson.

The incident had four cars involved where Novalak out-braked at Turn 1, hitting Piastri who then collected Belov and Carlin’s David Schumacher. Only the Russian continued from the melee as F3 contender Prema’s Logan Sargeant made the most to be fifth.

As Hughes led the way upon re-start, Lawson steadied in second with the third place fight getting interesting. In the melee Prema’s Frederik Vesti quietly climbed up to third with Sargeant darting past Zendeli for fourth but the two stayed together for long.

Zendeli wasn’t to keep back as he got the better of Sargeant and Vesti to be third with the two Prema drivers then squabbling, where the American and the Dane hit each other at Ascari. The former had a puncture while the latter had front wing issues.

Sargeant got past Vesti at Ascari but came back across where the Dane clipped the back of the American. The retirement for the former threw open the F3 title back open as ART’s Theo Pourchaire and Aleksandr Smolyar got into the mix for the podium fight.

As Hughes controlled to win the sprint F3 race at Monza, Lawson grabbed the opportunity to gain points in the title fight with Pourchaire coming through to third despite an off moment in the gravel early on. Teammate Smolyar was fourth.

They both got through Zendeli, who had to content with fifth from Campos’ Alexander Peroni, Hitech GP’s Pierre-Louis Chevot, Charouz’s Roman Stanek, Trident’s Oli Caldwell and MP Motorsport’s Richard Verschoor in the Top 10 points position.

UPDATE: F3 handed out penalties to multiple drivers post race with Lawson losing his second place allowing Pourchaire to be second and Smolyar third to make it a double podium for ART. The Kiwi got a 10-second penalty for forcing Zendeli off track at T1.

He dropped to seventh as 11th placed finisher Viscaal disqualified after he forgot to re-fit the steering wheel after the race which was done by a team member without permission from the Technical Delegate.

Also in the penalty list for Mugello, though, were Novalak, Piastri and Sargeant. The Brit and the Australian were handed a 10-second penalty which converted into a five-place grid drop for Mugello, where the former got it for his hit against the latter and Belov.

Piastri got it for forcing Beckmann off-track at Turn 5, which resulted in a retirement for the latter. And finally, Sargeant got a three-place grid drop for causing a collision when he collected Vesti, resulting in both of their retirements.