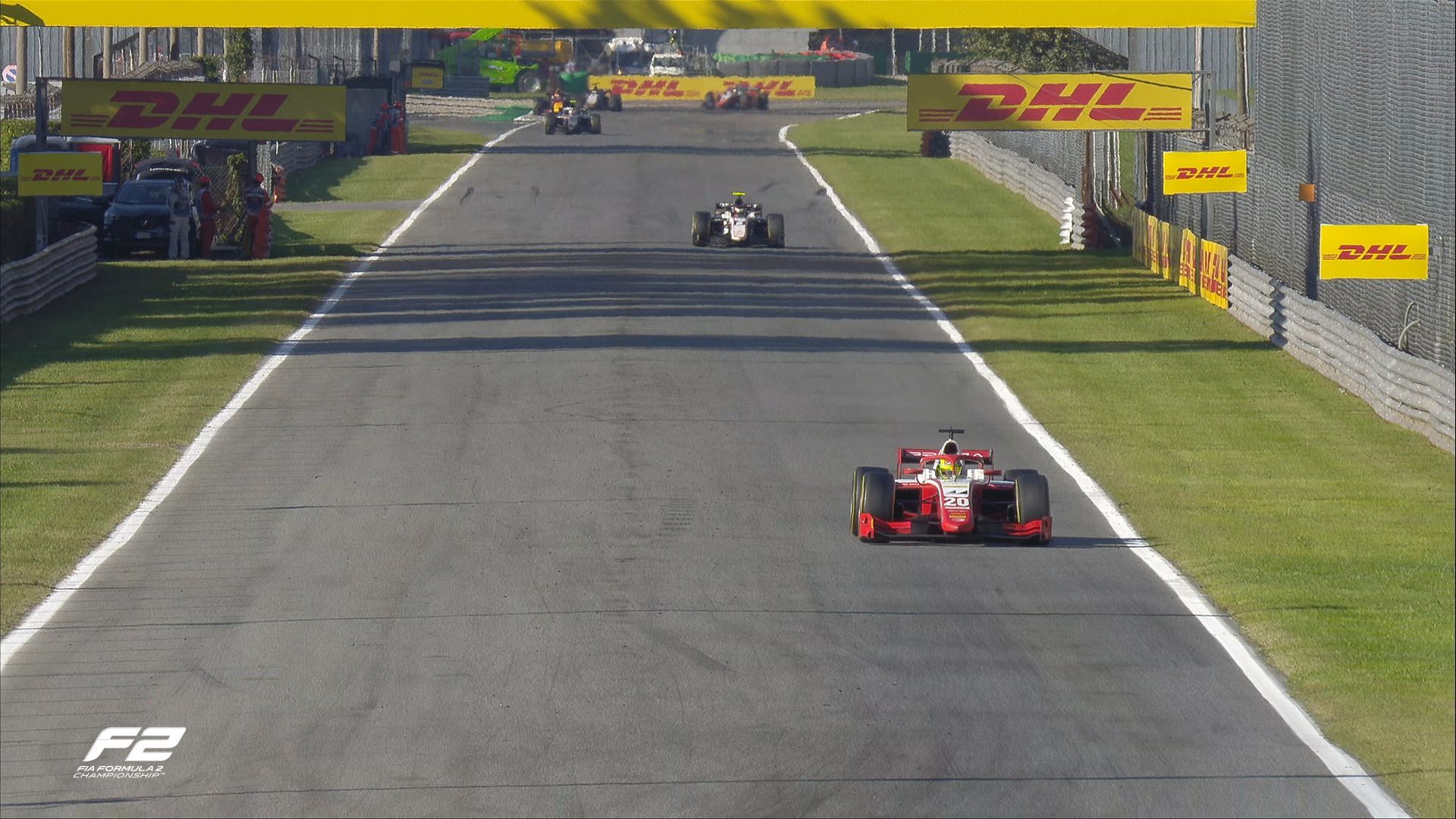 Pole-sitter UNI-Virtuosi Racing’s Callum Ilott started well in feature F2 race at Monza but Prema’s Mick Schumacher was a rocket to move from seventh to second by Turn 1 ahead of ART Grand Prix’s Christian Lundgaard and Hitech GP’s Luca Ghiotto.

While Schumacher hurried Ilott at the front, the fight for third heated up as Tsunoda was in a heated fight with Lundgaard and Ghiotto where Nissany and Ticktum joined in as well with Mazepin losing out while Deletraz kept Daruvala at bay.

It was three-wide at Turn 1 with Lundgaard on the inside, Tsunoda in the middle and Ghitto on the outside where the Italian touched a bit of the Japanese while on the grass. Fortunately, everyone escaped without any incident.

Ghiotto took the Turn 1 run-off option as Lundgaard eventually lost to Tsunoda for third with Nissany gaining places to fifth from Ticktum and Mazepin. ART’s Marcus Armstrong, meanwhile, was handed a five-second time penalty for an incident.

It was against UNI-Virtuosi Racing’s Guanyu Zhou, where the Chinese racer was forced off the track. He was then battling Daruvala on the alternate strategy as the F2 drivers who started on the soft compound starters came in for their pit stop.

It was disaster for the race leader Ilott, who dropped to 21st after stalling his car in the pits. It was a recovery mode then for the F2 title contender as Schumacher had track position over Lundgaard with the Dane ahead of Ghiotto and Tsunoda.

Meanwhile, the medium starters had Zhou making up a place on Daruvala for track position with both gaining on Mazepin and Nissany after the two came together at Turn 1/2 – where the Israeli and the Russian locking wheels together in the corner.

Mazepin went off as the move was put under investigation as the Russian had problems to drop to the back of the field before he got going. Post the pit stops, Schumacher had a commanding lead from Lundgaard and Ghiotto in the Top 3.

Tsunoda was fourth but he was under pressure from Deletraz, Prema’s Robert Shwartzman, Armstrong and Ilott from fifth to eighth as Zhou and Ticktum rounded out the Top 10 with Charouz’s Pedro Piquet just outside it, keeping Daruvala at bay.

The two UNI-Virtuosi Racing drivers were on the move as Ilott cleared three drivers to be fifth behind Tsunoda as Zhou came on his tail of his teammate in sixth. Behind, Ticktum was on the move as he up to eighth in the order.

Shcumacher, meanwhile, led the way with comfort as he secured his first feature F2 race win at Monza with Ghiotto clearing Lundgaard to take second, while Tsunoda hung onto fourth from Zhou who passed teammate Ilott after his salvage drive.

It was close, though, as Ticktum was just on his tail at the chequered flag with Deletraz ending up eighth to take the reverse grid pole for sprint F2 race. Shwartzman was ninth as Daruvala passed Armstrong to secure the final point.

The Kiwi also lost to Vips, who added another 11th position finish with Piquet 12th, Campos Racing’s Jack Aitkem 13th, Armstrong 14th with MP Motorsport’s Felipe Drugovich in 15th ahead of teammate Felipe Drugovich after they made contact early on.

UPDATE: F2 had post-race penalties awarded to certain drivers alongside Armstrong, who had a time penalty handed out during the race. For a similar offence of forcing another driver off track, Nissany was given a 10-second time penalty.

The Israeli thus finished 19th. It was the only issue with him and teammate Sato as Trident were fined 2000 euros as the tyres were not put in the flat position during pit stop. They also have a suspended five-place grid drop for remaining of 2020.

MP Motorsport’s, Matsushita, was also handed a five of 500 euros as the Japanese did not re-fit the steering wheel under parc ferme conditions.

He didn’t budge as he hurried Nannini and also Lawson to take the lead as HW Racelab’s Jake Hughes was another to push to be second. The fight among F3 title contenders was on as Prema’s Oscar Piastri and Logan Sargeant pushed to get back in the Top 10.

There was yellow flag briefly for an incident between Campos’ Alexander Peroni and Jenzer’s Calan Williams as safety car was deployed when ART’s Sebastian Fernandez was beached into the gravel, neutralising Pourchaire’s lead.

He kept Hughes at bay, though, but Lawson had immense pressure, first from Nannini where the two even touched where the latter had damage to retire. He then faced Prema’s Frederik Vesti, who had tremendous pace to come through the field.

The Dane hurried a slower Lawson and eventually got through him before cleaning Hughes. While Vesti and also Pisatri was gaining places, Sargeant’s F3 lead was lost when he tapped out by Carlin’s Clement Novalak, who was handed a 10-second penalty too.

It ended Sargeant’s race as Piastri took it gladly by passing Lawson and even Hughes to be third behind Pourchaire, who lost his lead to Vesti. The Dane secured his second F3 win with the ART racer having to settle for second from the new points leader.

Trident’s David Beckmann too climbed up the order to be fourth after clearing Hughes and Lawson, as the Hitech GP driver lost more points in the title fight. Trident’s Lirim Zendeli ended up seventh with MP Motorsport’s Bent Viscaal moving up to eighth.

Another mover was HWA Racelab’s Enzo Fittipaldi to be ninth as Charouz’s Michel Belov ended up 10th to take reverse-grid pole after teammate Roman Stanek was handed a time penalty which dropped him from ninth to 10th.