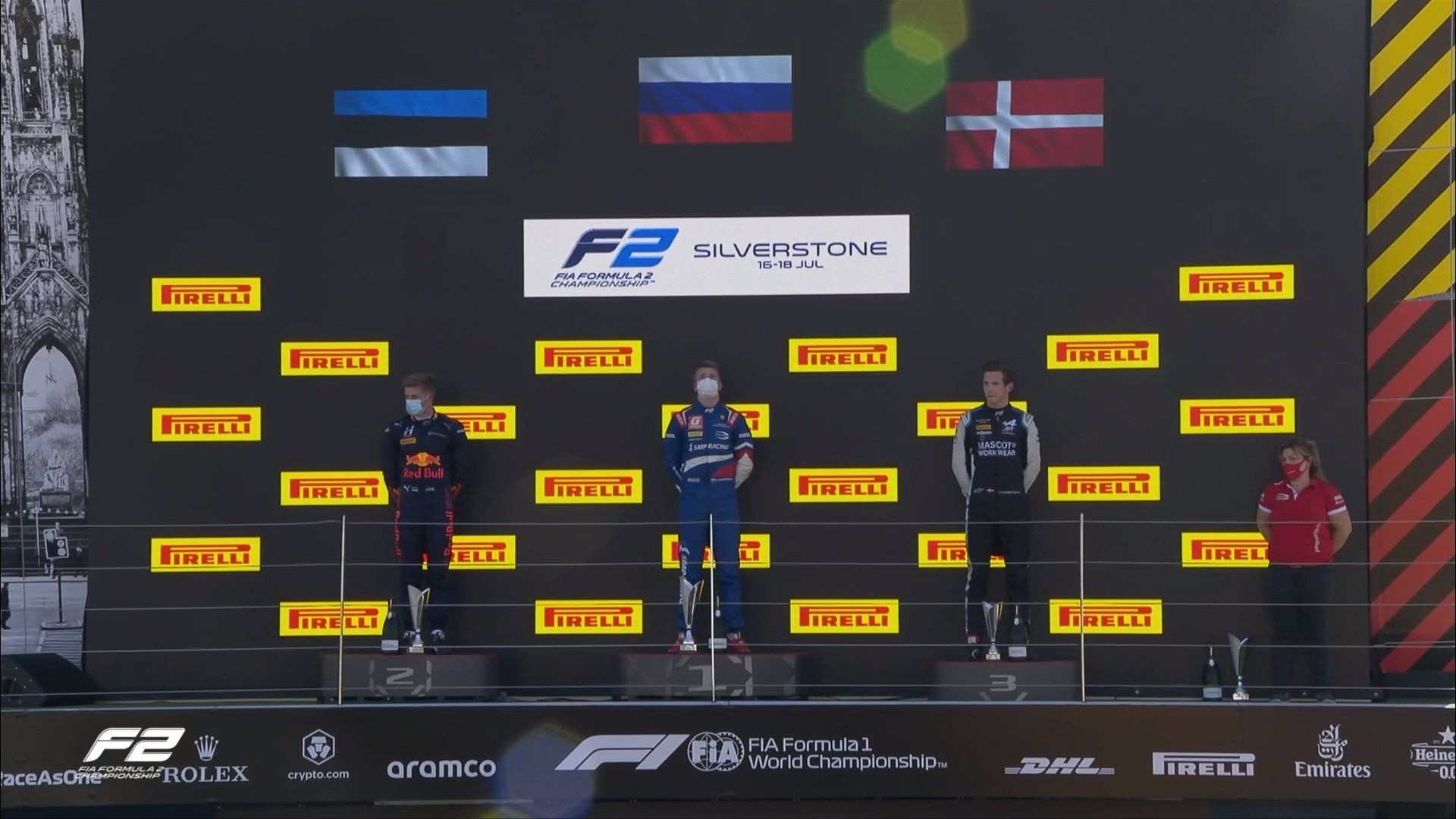 It was a slow start from the front-row starters ART’s Christian Lundgaard and Hitech GP’s Juri Vips, which allowed Prema’s Robert Shwartzman to take the F2 Race 1 lead. The Estonian slotted in second with the Dane behind him in the Top 3.

Replays showed Lundgaard getting a punt from DAMS’ Roy Nissany, who retired after few corners. There was also a spin for UNI-Virtuosi Racing’s Guanyu Zhou, while Trident’s Mario Sato, Campos’ Ralph Boschung and HWA Racelab’s Alessio Deledda had a trouble too.

The safety car was deployed to clear the cars of Nissany and Zhou, as Shwartzman led Vips and Lundgaard in the Top 3 from UNI-Virtuosi Racing’s Felipe Drugovich, ART’s Theo Pourchaire, Hitech GP’s Liam Lawson, who made up chunk of places at the start.

Behind Lawson was Prema’s Oscar Piastri in seventh, Carlin’s Daniel Ticktum eighth, DAMS’ Marcus Armstrong ninth and MP Motorsport’s Lirim Zendeli 10th. The re-start saw a big fight for sixth between Lawson, Piastri and Ticktum, but not for long.

Lawson managed to keep ahead as there was another safety car for a spin from Deledda. The re-start this time saw Lawson lose out to Piastri for sixth, as he defended hard from Ticktum and Armstrong, while Zendeli had teammate Richard Verschoor just behind.

It was status quo until Charouz’s Guilherme Samaia beached himself into the gravel, which required another safety car period. This pushed multiple drivers outside the Top 10 to pit for change, where Verschoor was the leader in that pack on fresher compound.

There was trouble for HWA Racelab’s Jack Aitken in the pits where his front-right, but he managed to got going. The re-start, meanwhile, worked well for Shwartzman as he eventually eased into to win Race 1 of the Silverstone F2 weekend from Vips.

Lundgaard was third with Drugovich fourth, fending off a late charge from Pourchaire. Piastri in sixth with the fastest lap jumped into the F2 points lead, as Lawson managed to keep Ticktum and Armstrong behind in the fight for seventh.

The Top 10 was rounded out by Verschoor, who fought through the field to take Race 2 pole, as he cleared Zendeli, Carlin’s Jehan Daruvala, Charouz’s David Beckmann and Campos’ Boschung in the process. 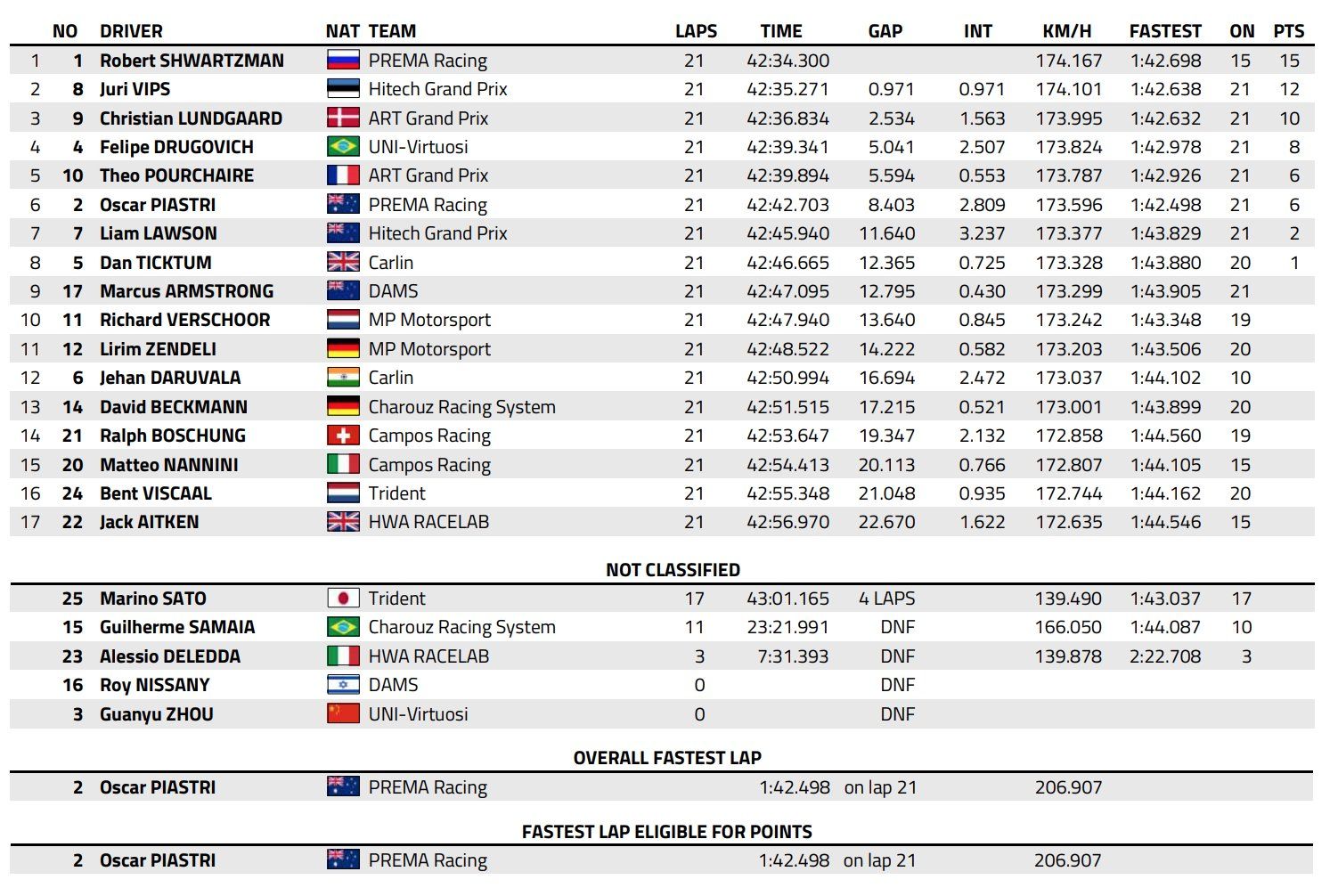 It was a clean start from pole-sitter Verschoor as he fended off Armstrong and Ticktum to start Race 2 of the F2 weekend at Silverstone. Lawson steadied in fourth from Piastri as Drugovich was sixth with Vips seventh after Lundgaard stalled on the grid.

The Dane had to start from the pitlane but was already back up nicely. The Top 10, meanwhile, was rounded out by Beckmann, Shwartzman and Zendeli, where Pourchaire dropped outside of the Top 10 after a bad start for him.

There was immediate safety car for an incident between Boschung and Deledda, with no to be blamed. The re-start saw Verschoor hold on as Ticktum chased Armstrong, while Piastri pushed Lawson. Behind, Drugovich was passed by Vips for sixth.

The Brazilian, though, pushed him along with Beckmann, Shwartzman, Zendeli, Pourchaire and Zhou. Behind them, Daruvala and Viscaal came together at Stowe, with the Indian losing his rear in the right-hander and clipping the Dutchman into a spin.

Viscaal’s race was done, as Daruvala continued after needing a front wing change. He was handed a 10s time penalty for causing a collision, as a long safety car period ensued. The re-start saw Piastri hustle Lawson again and this time managing to make the pass.

Drugovich, meanwhile, got very close to Vips, who went wide but the Estonian managed to hang on. But there was a spin for Shwartzman in the final corner after he lost his rear on his own, while Aitken had a spin on his own at Stowe corner.

At the front, Verschoor was unbeatable to register his first F2 win of the 2021 season, with Armstrong in second from Ticktum. Behind them, Piastri in fourth extended his points lead after another fastest lap, with Lawson in fifth from teammate Vips.

Drugovich had to be content with seventh from Beckmann, as Zendeli and Pourchaire rounded out the Top 10 from Zhou, Nissany, Nissany, Lundgaard, Nannini and Shwartzman in the Top 15 – where the Dane made up 10 places from the pitlane. 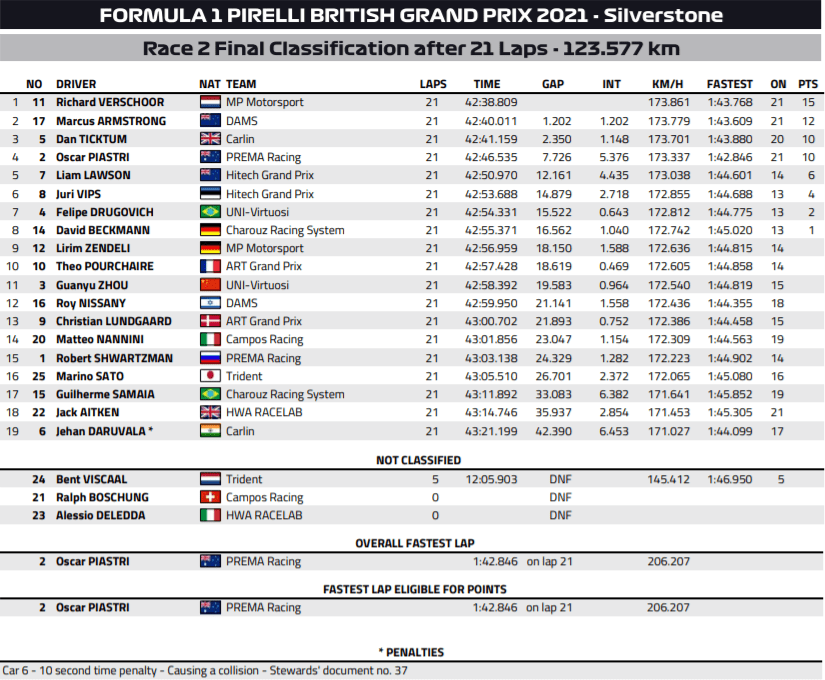