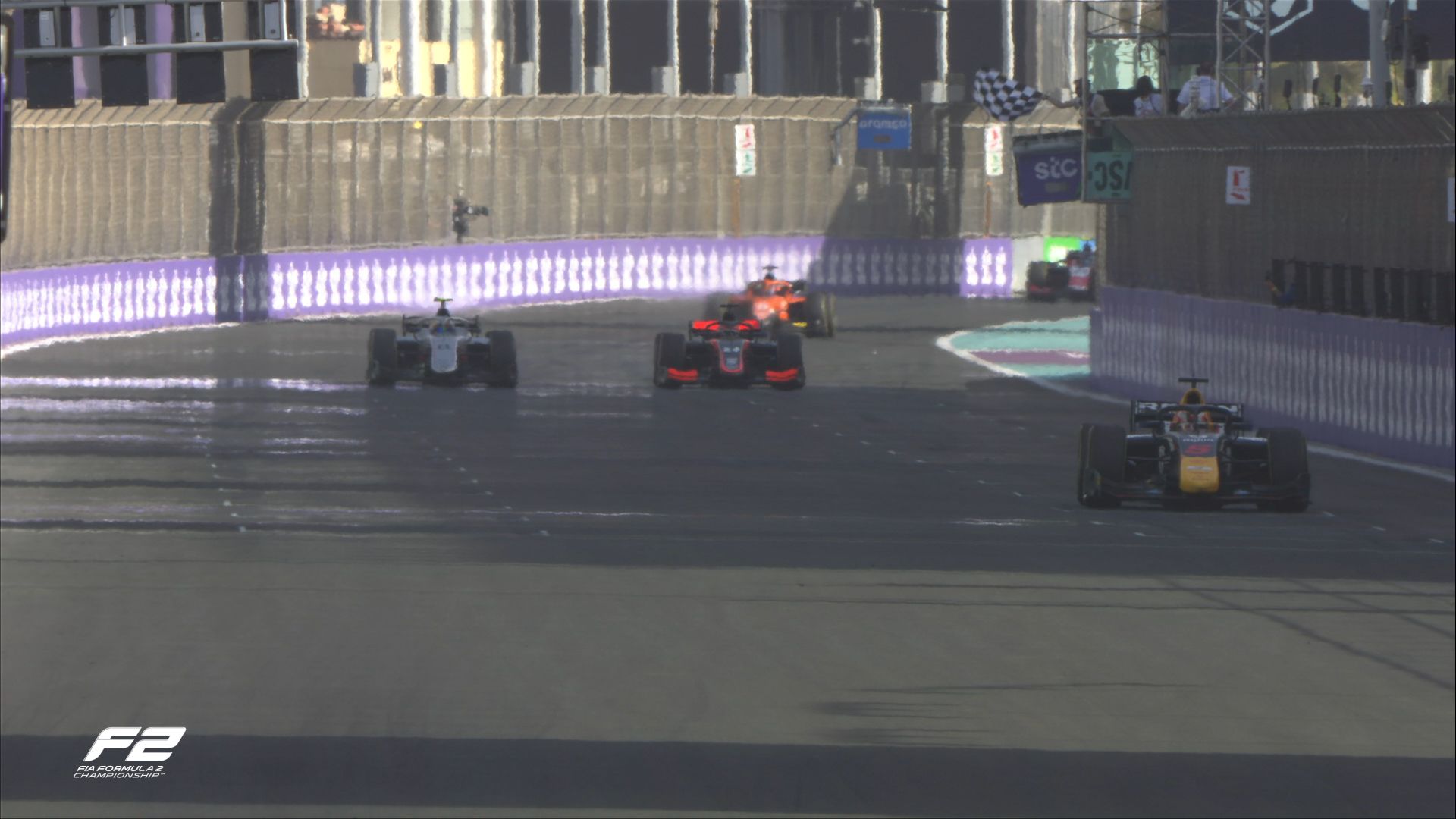 It was a cleaner start to the sprint F2 race in Saudi Arabia, as reverse grid pole-sitter Dennis Hauger led the way in his Prema from Trident’s Calan Williams, with DAMS’ Ayumu Iwasa lining-up in third from Van Amersfoort Racing’s Jake Hughes.

Carlin’s Liam Lawson was fifth from Campos’ Ralph Boschung, Hitech GP’s Marcus Armstrong & Juri Vips in the Top 8. Replays showed the Swiss driver to be out of position, but for much of the race he wasn’t even investigated.

When it looked like things would be normal, Van Amersfoort’s Amaury Cordeel crashed out leading to a safety car. By then, the order was Huager leading from Williams as Hughes got back on Iwasa to take third, with Lawson remaining in fifth.

Armstrong was sixth from Vips, who cleared Boschung. Before the race could get going, there was a big incident on re-start when Virtuosi Racing’s Jack Doohan ran into the back of Carlin’s Logan Sargeant, when the American tried to go to the left of the track.

There was another safety car with a mistake from Race Control message leading to Hauger receiving a 10s stop and go penalty. The message was to go through pitlane but the flag box showed pitlane entry closed. It was too late for the Norwegian to make amends.

He dropped to 12th as a result as Williams led the way from Hughes and Lawson in the Top 3. The re-start saw Hughes take on Williams for the lead as he even lost second to Lawson straight up. Vips was up to fourth from Iwasa, Felipe Drugovich, Armstrong, Verschoor.

Iwasa dropped behind not only Armstrong but also Verschoor as Boschung started to pile the pressure. The Swiss racer almost lost out to the recovering Prema’s Jehan Daruvala but the Virtual Safety Car saved him after Armstrong spun after a hefty battle.

Lawson eventually cruised to take the sprint F2 race win in Saudi Arabia, as Vips cleared Hughes on the line to take second on re-start with the fastest lap. Drugovich was fourth after clearing Williams who led teammate Verschoor in double points.

Iwasa hung on to seventh from Boschung to score the last point, with Daruvala ninth from Virtuosi Racing’s Marino Sato in the Top 10. DAMS’ Roy Nissany was 11th from Cahrouz’s Enzo Fittipaldi, with Hauger eventually lining up in 17th.

UPDATE: In a big post-race investigation, VAR’s Hughes lost third place after a technical infringement where a skid plank was found to have a maximum thickness of 3.6mm when the thickness is to be 5mm +/- 1mm. This led to the car being disqualified from the race.

“They summoned and heard the team representatives (document 57). The Stewards heard from the Team representatives who explained that wear on the plank was on the loaded side of the car, and this was likely to be due to variations in tyre pressures during the multiple safety car deployments that occurred.

“Having considered the matter extensively, the Stewards determined that Car 24 did not comply with the Technical Regulations and is therefore disqualified from the results of the Sprint Race. The Stewards understand the circumstances that the team explained, and view the matter a resulting from an unfortunate error on the part of the Team and not due to intent,” stated the FIA report.

In another result changing decision, Boschung was handed a drive-through penalty converted to 20s time after it was found out that he was out of position. The Swiss racer dropped to 15th as a result allowing Daruvala and Sato to be in points.

“The Stewards reviewed video evidence and the jump-start report based on the information from the FIA approved and supplied transponder fitted to each car. They summoned and heard the driver of Car 15 and team representative (document 55). The Driver of Car 15 explained that he overshot the yellow grid box position indicator, realised he was outside the grid box, and considered reversing back into the correct position, but was hesitant to do so and risk clutch/transmission problems during the race start.

“Having consider the matter extensively, the Stewards determined that the jump-start report shows no irregularity and that Car 15 positioned his car on the starting grid in such a way that the transponder was able to detect the moment at which the car first moved from its grid position after the start signal was given in accordance with Article 37.13(b) of the FIA Formula 2 Sporting Regulations. However, the video footage clearly shows that the wheel contact patch is in front of the car’s grid position which is a breach of Article 37.9 of the FIA Formula 2 Sporting Regulations,” stated the FIA report.

A third penalty was dished out to Doohan, for his incident with Sargeant. The Australian was found to be blamed for the incident and so he has been handed 3-place grid drop for the feature F2 race in Saudi Arabia.

“The Stewards examined video and GPS evidence. They summoned and heard the drivers and team representatives (documents 50 & 51). Having considered the matter extensively, the Stewards determined that as the field came through Turn 27 and exited onto the main straight, the rear of the field suddenly bunched up as drivers who had accelerated anticipating a start found the leader maintaining speed and were forced to slow down.

“Car 6 pulled to the left to avoid the cars in front. Car 3 did the same, but there were no open gaps at that point and he almost unavoidably ran into the back of the Car 6. Car 3 is judged predominantly to blame for the collision. The blind nature of the exit of Turn 27, which only allowed drivers to see 2 or 3 cars ahead complicated their task during the restart. The penalty point assigned is reduced from the those normally assigned due to the difficult position the driver of Car 3 found himself in,” stated the FIA report.

And the final document released by the FIA was regarding the protest made by Prema regarding what happened with Hauger, which was dismissed. The argument resulted in the Race Direction noting that ‘flags, the marshal panels, and Timing page 3’ are the official forms of communication, with the race director radio line not to be taken as official mode. 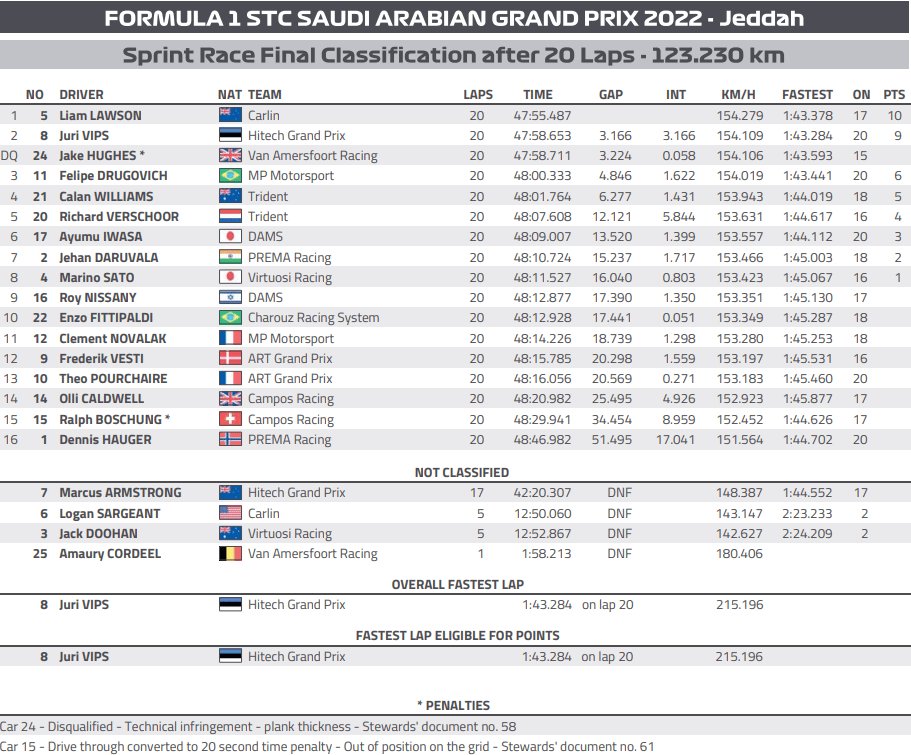