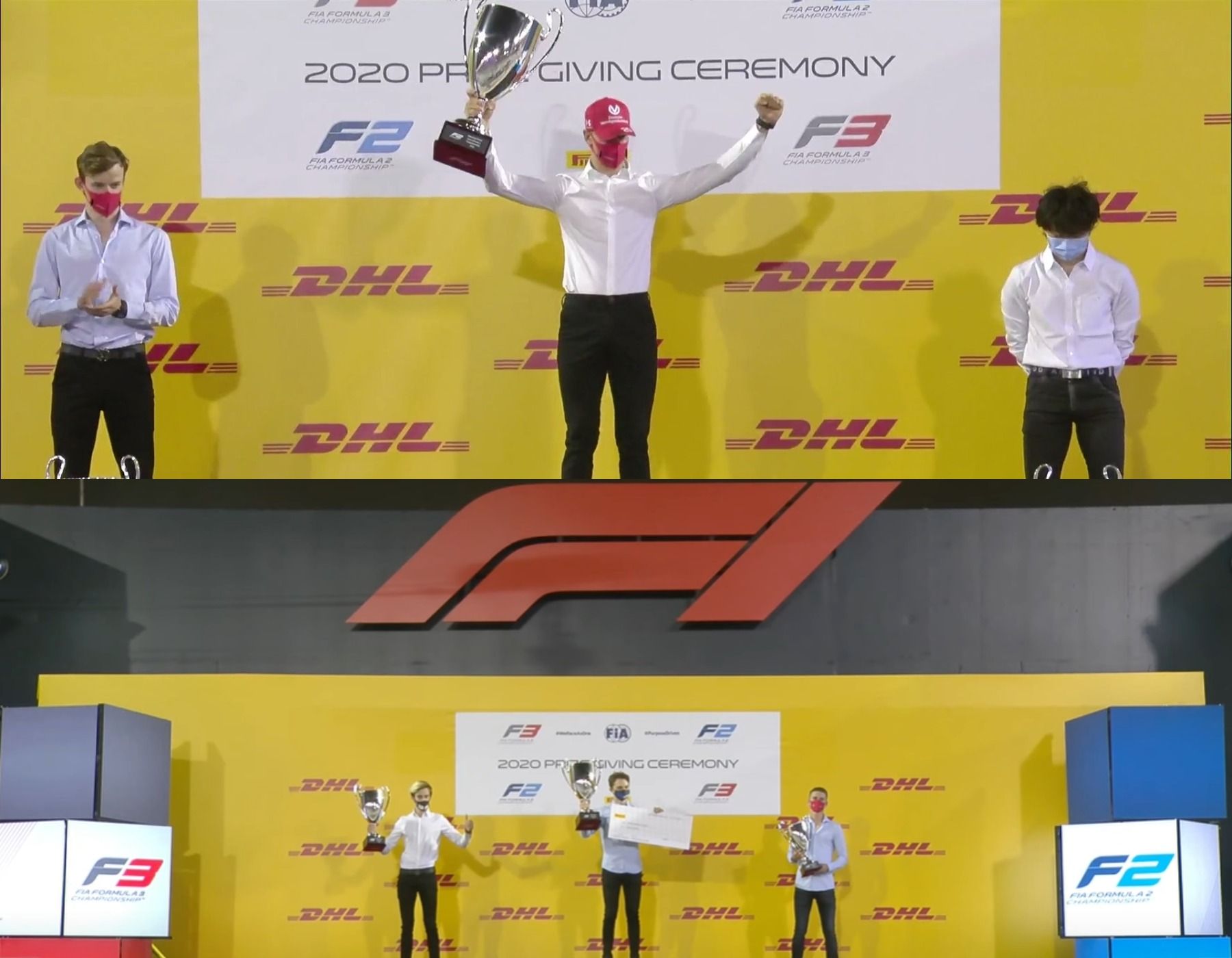 With the 2020 F2 and F3 done, FormulaRapida.net decided to draw out a ranked list in a new ‘Tier’ system, moving away from a traditional, individual ranked order.

The shortened 2020 season had its share of strong performances from everyone on the grid, whether at the front of the field or at the back. For this reason, we decided to do away with the traditional structure of a tiered system of categorisation.

We – Darshan Chokhani (DC) and Duncan Leahy (DL) – decided on the Tier system. Much like how we did with F1, we thought of the same for its junior series’ drivers competing in F2 and F3. For the tiers, we have only F2 and F3 drivers but outside we have noted about the performances of other feeder series’ above the F4 level.

Here’s how the line-up stacked up:

The 2020 Formula 2 champion, Schumacher impressed with his remarkable consistency. It was this consistency that saw the German son of seven-time F1 champion Michael Schumacher secure nine podiums, two of which were feature race victories. With 15 points finishes in the last 16 races, Schumacher secured his championship not through victories (he was outdone in wins by three of his main title rivals), but rather through reliable performances. Schumacher earns his tier one spot for this reason exactly.

The top rookie of the 2020 season, Tsunoda won three times, for a total of seven podiums. His efforts culminated in a third-place championship finish, as he defeated Shwartzman fairly convincingly with 200 points to the Russian’s 177, and for his efforts was awarded an AlphaTauri F1 drive alongside Pierre Gasly as he steps up to replace Daniil Kvyat this coming season. He will be the first Japanese F1 driver since Kamui Kobayashi after coming within 15 points of a championship win, and earning himself a high spot on our ranking.

Piastri was the one to win the Formula 3 championship after a close title fight, topping the standings with ART after earning two wins, and six podiums. Consistency was the deciding factor in 2020’s fight, and Piastri won on account of this virtue, with the Australian only finishing outside the points in one of the races that he finished. With 164 points to his name, Piastri will step up to Formula 2 this season, this the next logical step in his pursuit of an F1 career.

A lackluster season start for Pourchaire was made up for in subsequent rounds, when he secured two consecutive victories before earning six more podiums before the season’s end, for a total of eight in his campaign. He came up 3 points shy of a championship triumph, and completed the season without any retirements with his noteworthy performances placing him in tier one.

Three victories were among Ilott’s six podiums in 2020, with the UNI-Virtuosi driver the antagonist of the title fight with his 201 points enough to keep him competitive in a fight against Schumacher, who ultimately eclipsed him by 14 points. Ilott lacked consistency when compared to the German Prema driver, but nonetheless showed flashes of brilliance, enough to keep him in championship contention and earn him a second-tier position on our list.

Shwartzman’s debut Formula 2 season yielded four wins, and two further podiums with consistency among his few weaknesses in the year. It was all enough to earn him fourth in the world championship, a valiant effort from a rookie in a remarkably competitive field. Shwartzman, impressively, was the winningest driver of the season with his four victories, eclipsing even those in front of him in the championship when using the metric of wins. For this reason, it was hard to justify a spot any lower than tier two on our list.

Sargeant, in his second Formula 3 season, picked up two wins and six podiums in his 2020 campaign, leading the championship standings at two points in the season, and after the Belgian GP round before he lost his lead in Monza, never to retake it with a DNF in the subsequent Mugello Sprint race sealing his fate and relegating him to third – still a strong showing from the young American, who seems a possible prospect for Formula 2 in the coming year, and for his efforts seemed a logical addition in a competitive tier.

Between Vesti and Liam Lawson, it was difficult to find one more deserving of a Tier 2 position, but the former took the spot on account of the fact that he entered the 2020 F3 season as a rookie, as opposed to the latter, who spent 2019 in the championship with MP Motorsport. The difference between the two was just 3.5 points, and the Danish driver edged out the Kiwi in his Prema, while the latter was in a Hitech GP car. He scored three wins eventually in his first year, and was reliably competitive with his teammates Piastri and Sargeant.

Being a title contender in F2 until the final rounds, it was difficult to put Mazepin in the third tier. The Russian drove well throughout 2020 in his second year of the category, and his first with Hitech GP, who made their debut in the category in 2020 as well. It isn’t easy for a team to enter the championship and be on-song straightaway, but they surprised everyone with the Russian doing well alongside veteran Luca Ghiotto. The two wins and four podiums showed Mazepin’s capability, and if not for penalties – the prime reason for his tier 3 spot – he may have achieved more. The few errors he made – some on the dangerous side – proved crucial eventually in him not being a serious title contender, and meant he lost a tier two spot he may otherwise have had, even though he will step up to F1 with Haas alongside Schumacher.

Drugovich was another driver to just miss out on what could have been a jam-packed tier two. The Brazilian did all the right things in his rookie F2 season but missed out due to slightly inconsistent results, after he ended up eighth in the standings as opposed to another rookie Shwartzman, who was fourth. His highlight was certainly the three wins, a third place and a pole, but he showed good tyre preservation skills too.

Zhou finished sixth for UNI-Virtuosi racing, but six podiums and one win in his sophomore season was not the step up many expected after 2019 campaign wherein he earned five appearances on the rostrum. His only win of the 2020 season came in the Russian GP Sprint race, an event in which he started on pole after coming eighth in the preceding feature race. Though a strong season for the Chinese driver, it was not deemed tantamount to those of the grid’s most frontrunning drivers like Schumacher.

As mentioned above, Lawson only missed out to Vesti by a tiny margin to be in tier two. The Kiwi had a solid second season with three wins and a total of six podiums along with a pole to be fifth. He was in the mix for the F3 title until the finale. After a moderate first season, the Red Bull junior showed his all-round skills at Hitech GP, where he comprehensively beat his teammates Dennis Hauger and Max Fewtrell.

After contesting 2019’s Abu Dhabi GP for ART in Formula 2, Lundgaard returned to the team in 2020 to find some success in what was essentially his rookie year, claiming two victories and six podiums. His seventh place championship finish was a strong performance, and demonstrated that some improved consistency could form him into a fierce championship challenger this season. His performance also convinced us that he was worthy of a notable tier four spot.

Granted it was Deletraz’s fourth full year in F2, but the veteran didn’t disappoint at all with his performances, certainly given his Charouz machinery. He wasn’t talked about much, but did his job quietly with five podium finishes and was consistently in the points as well. He did what was expected of him. He did, however, miss out on a win, which would have been icing on the cake – especially as it looks like to be his last year in the championship.

Beckmann was another driver who marginally missed a spot in Tier 3, having finished sixth in the drivers’ standings in his second season with Trident. He scored two wins and had four additional podium finishes but despite more points-finishing races, he couldn’t penetrate the Top 5, where some of his competition had fewer races in the points. The German was the leading Trident driver and despite having good one lap pace, they lost out in the races.

Zendeli was in a similar boat as teammate Beckmann, the German ending up eighth in his second season, with one win, two other podium finishes and two poles too. He did well in qualifying but lost out in races – a fact that denied him a possible title, even though his teammate had an outside chance. He has found a seat in F2, but it is largely because he didn’t wish to do another F3 season, where he can invest in the senior feeder championship to put himself in a better position.

Naturally, it was difficult to put everyone in the tiers, especially with about 55-60 drivers in F2 and F3 collectively. F2 had about 12 different winners, while 16 different podium finishers, which shows the competitive grid. They could have made it into the tiers but there were too many eventually. The likes of Luca Ghiotto, Daniel Ticktum, Jehan Daruvala, Marcus Armstrong, Jack Aitken, Nobuharu Matsuhita and Juri Vips, all had pockets of shining moments but lacked a bit of consistency to be inside the tiers.

In a similar way, the F3 side also had multiple drivers – even inside the Top 10 – who excelled in certain moments. Veteran Jake Hughes had couple of wins, whereas Richard Verschoor and Alexander Peroni, did well with podium finishes. Outside the Top 10 had Aleksandr Smolyar, Clement Novalak, Bent Viscaal, Dennis Hauger and Matteo Nannini with wins/podiums too, in a competitive field of more than 30 drivers.

Outside the F1’s direct feeder of F2 and F3, another equivalent championships like Formula Regional European Series had some sound performances, where Gianluca Petecof took the 2020 title after defeating Prema teammate Arthur Leclerc in close fight, with Oliver Rasmussen, Patrick Pasma and Pierre-Louis Chovet in the Top 5. At the same time, Formula Renault Eurocup saw Victor Martins victorious over Caio Collet, where Franco Colapinto, Alex Quinn and Lorenzo Colombo ending up in Top 5. Also, the 2020 Euroformula Open had Yi Yifei winning the title from Lukas Dunner, even though the latter did not compete the full season, as the Top 5 was rounded out by Andreas Estener, Manuel Maldonado and Niklas Krutten.