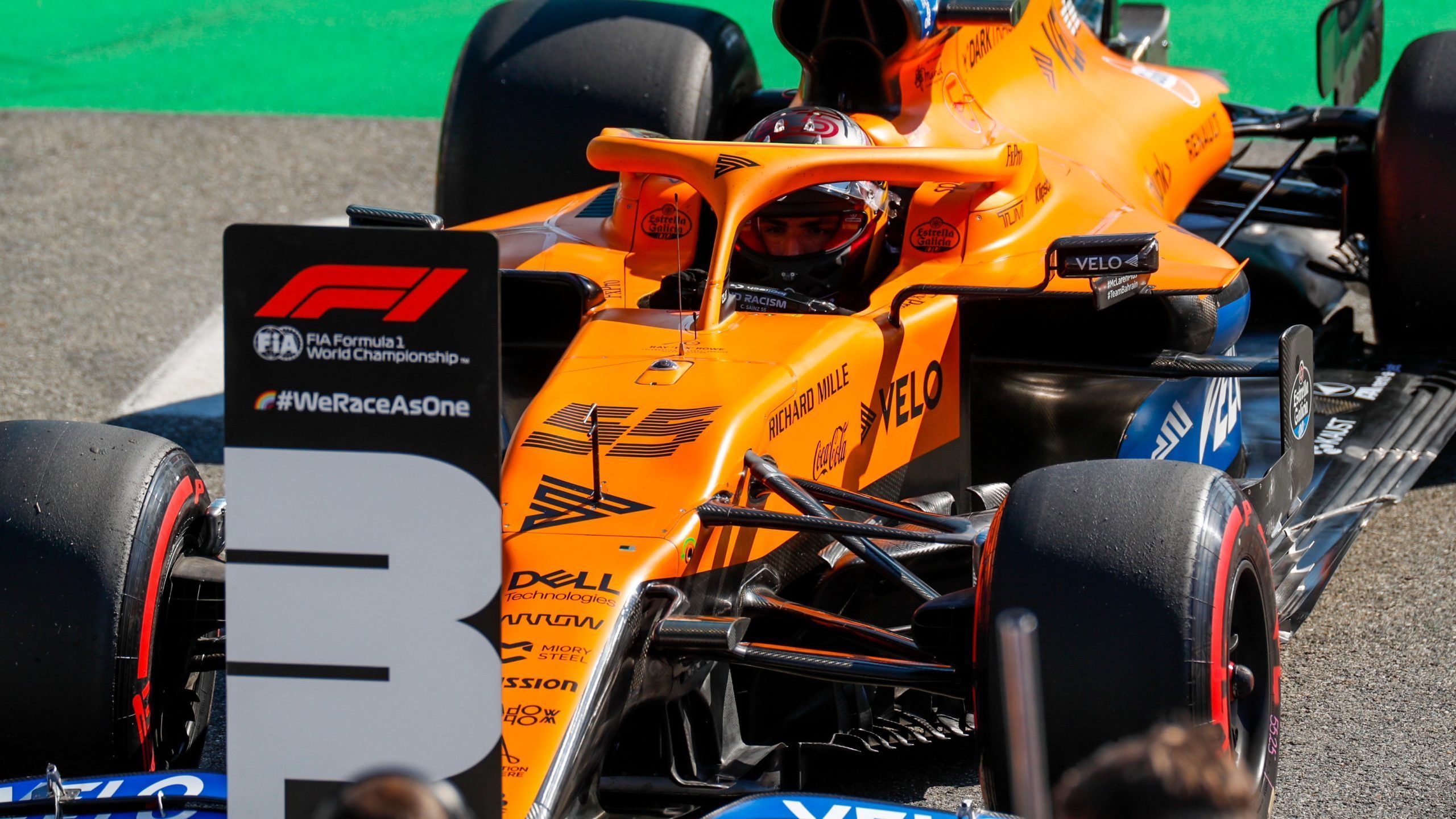 In a sport traditionally so acclaimed for its unpredictability, the continued dominance of Lewis Hamilton in Qualifying for this year’s F1 Italian GP might have been viewed as uncharacteristic, if not for the fact that the Brit has controlled the 2020 season, particularly on Saturdays.

At Monza, Hamilton broke the track record for the circuit on his way to a 94th pole position, snatching pole from his teammate Valtteri Bottas. The nearest non-Mercedes car in the session was eight tenths off his time, despite an anticipated decrease in speeds for the German outfit, whose party mode, as well as those of rival F1 teams, were banned.

The six-time F1 champion stated his car is the best its ever been at Monza, saying a sweet spot has been found. “We did say last week when they brought in this rule to slow us down that it wasn’t going to make a difference but we have a great, great car and we are better in other areas,” said Hamilton. “I think this is definitely the best we’ve ever been here. We’ve really got the car in a sweet spot this weekend.

“It’s such a hard thing to do and I think people take it for granted because we do it weekend in, weekend out. It was very, very close.” By only the narrowest of margins did Bottas miss out on pole position, as he was seven tenths behind. For his second place, the Finn was somewhat disappointed, as one might expect. “Close gap, and I was expecting it to be close,” he said.

“I’ve been feeling pretty fast this weekend, so obviously a bit disappointed to be second instead of first but ultimately it came to the choice of running first or second. I took the first because, from our analysis, there shouldn’t be much of a difference, or maybe even better to be first, so you can really focus on the clean laps, and not to have any messy out-laps but I just experienced once in qualifying a tow, end of Q2 and it didn’t feel too bad and that’s when I had the quickest time so, otherwise just cutting the wind at the front. In the corners I was fast. It’s impossible to say without seeing the data, which one’s better.”

Both did not spill it out but felt no difference – as expected – with the engine mode, where in fact, Bottas wondered how happy Red Bull would be with the change. Meanwhile, mixing up the formula to some degree, though, Carlos Sainz was the man to qualify third, assuming Max Verstappen’s typical starting position after a scintillating lap in Q3. The Spaniard, of McLaren, was thrilled to be starting on the second row, his feelings only accentuated by the missed opportunity that was the F1 Belgian GP weekend.

“Very happy to fight back after obviously a very disappointing Spa, and to fight back with a P3 in qualifying… definitely didn’t expect to be so high up,” said Sainz. “We normally expect the Red Bulls or the Renaults at this track to be ahead of us but honestly since the start of Q1 I felt like I had a chance to put it in the top three today and by nailing good laps since the beginning of Q1, saving myself again another two sets for Q3, that gave me the opportunity to really risk it on the last set at the end of Q3 and it paid dividends.”

Teammate Lando Norris (6th) added that he made several smaller errors throughout his final Q3 lap, which ultimately cost him in a tight mid-field pack as he couldn’t replicate the performance of Sainz. Looking at the F1 grand prix, the Spaniard was more about keeping anyone behind possible as felt Verstappen would have a better pace, along with Daniel Ricciardo.

To the side of Sainz on the grid will be yet another mid-field regular, this one a Racing Point driver in Sergio Perez. The Mexican expressed surprise over his pace in qualifying given the prioritization of race pace within his car set-up. He also stated that he has confidence in his ability to fight for a podium on Sunday – something that the new rule on engine modes might help him to achieve in his Mercedes-powered RP20.

“We’ve worked so hard to improve the car in every session,” said Perez. “We’ve focused on getting the car set up for the race, so I’m surprised with how competitive we were in qualifying. It’s always important to qualify well here – because overtaking isn’t easy – and P4 is a great starting position. We’ve taken some steps forward and I’m confident we can fight for a podium finish. “There’s been a lot of talk about engine modes, and it probably affected us a little in qualifying, but it should help our race pace,” summed up Perez, while Lance Stroll, P8, said that a sloppy session compromised what could have been a good result after immense progress overnight.

Only managing fifth, meanwhile, was Red Bull’s Verstappen – and by his own admission – lacking the pace to get into the top three, partly by virtue of an uncooperative RB16. “It’s just not a good weekend for us,” he said. “Already from the start, just struggling for pace. It seems like on the low downforce our car seems to struggle a lot more with a sensitive rear, just not really gripping up like it should do. I tried everything, very low, medium low, and a little bit more. I end up doing the same lap time all of the time, so it just shows that our car is not good enough at the moment.

“Just around here, we know top speed-wise, we are down on power to Mercedes especially, and that’s a given, but that is not the deficit we have to them at the moment. It’s not that big, the deficit in power. From our side, we just yeah, didn’t have a good balance in the car, but not only that, but we’re also lacking grip,” summed up Verstappen, as his teammate Alexander Albon lacked pace to a greater extent, as the Thai driver only managed P9. He did, however, still label it as one of his better qualifying sessions, only appearing worse due to the tightness of the field, and the relative competitiveness of his car.

In terms of engine mode, Verstappen did not thing Honda faltered. “Honestly I don’t think we went backwards,” he said. “I think this is also a bit of a track to really see the full benefit or differences, because Monza, everybody is in the tow, some have a better tow than others, so I think we have to wait a bit until we go to a normal track again. Nobody wants a tow and to drive in clear air. Too early to say anything about that.

“But I never expected it to be very different, but of course some other people were shooting some different words. It is what it is. As you can see, it didn’t really shake up anything, but I also didn’t expect that.” Meanwhile, for Ferrari, a worse day would have been hard to conceive, as the Italian F1 team had no one in the Top 10 with Sebastian Vettel abandoning his attempt at getting into Q2 after it was marred by excessive traffic, with several cars all vying for the slipstream.

The German complained of the overtaking in the queue he found himself in, which hampered all those involved, though he did admit that he and his team could have paid more care to not getting stuck in such a scenario. “There’s not much to say about this session.” said Vettel. “There were a lot of cars in front of me when I started my second quick lap. In that moment I knew it wouldn’t be possible to improve my time. I don’t know why the other drivers started to overtake on the warm up lap.

“I found myself in the middle of the mess and didn’t get a lap. Everybody should stay in the position they are in the line, then everybody opens a gap and it should be fine to set a time.” Post his ouster, Vettel actually went trackside to watch Q3 action from top as F1 shared a video of him: https://www.formula1.com/en/video/2020/9/’Didn’t_hit_the_apex_’_-_Sebastian_Vettel_watches_Monza_qualifying_from_trackside.html

Meanwhile, teammate Charles Leclerc also didn’t manage any better than 13th in the end. “Coming into the weekend we expected it to be like this,” he said. “We knew that Spa and here are probably the two worst tracks for us but this is our situation at the moment. It’s tough, because once you do a good lap and you end up P13 it doesn’t feel good. But for now I need to try and extract the maximum out of the car in the situation we are in.”

Renault were another team to have a day plagued by mediocrity, with Esteban Ocon in P12, and his teammate Ricciardo, P7. The former narrowly cost out on Q3, and this, he says, is partially because his teammate kicked up gravel during an off moment at the second chicane. “Coming into Q2, obviously the last run was slightly compromised with our track position and how everything went,” said the Frenchman. “I  came in front of the pack, which wasn’t the plan.

“Obviously Daniel he went off about and put gravel on the track and I was just behind and then obviously I couldn’t improve my lap time because I was left alone in the front so yeah not an ideal session, I think. There basically wasn’t a clear lap there, and there was a possibility for Q3 that is for sure. So we are a bit disappointed with how it went.

The man responsible for the gravel was, in his own right, less than thrilled about his result, even though he was happy with his Q3 lap. The Frenchman also escaped any penalty after he was summoned for blocking Alfa Romeo’s Kimi Raikkonen in Q1. They were part of the train of cars who had their laps ruined by the mess.

The stewards along with the drivers agreed that the situation was avoidable and not dangerous. Hamilton was leading Nicholas Latifi, Ocon and Raikkonen, where the Canadian slowed to create a gap which caught the Frenchman and the Finn out. “It was very much racing for position, that’s exactly the word, for sure,” said the Renault F1 driver.

“I think the new rule, obviously on the Delta, that we have to follow for not going too slow made things worse to be honest than how it was before. We need to review, obviously next drivers’ meeting, what we can do better. Obviously it was to not intend of having those sorts of issues you know, people slowing down for no reason, but we have to make a gap at some point to make the lap. And we didn’t have the chance to do that.

“Because we can’t slow down. So it made it a bit tricky for everyone and I think that’s why a lot of cars were racing in the end, nothing really happened but, of course, Kimi started his lap too close to me, so he was trying to pass me, but if that had been the case then both of our laps would have been ruined. And obviously his was, but I still managed to complete mine, even if it was not an improvement.”

Here’s how the F1 Italian GP qualifying panned out