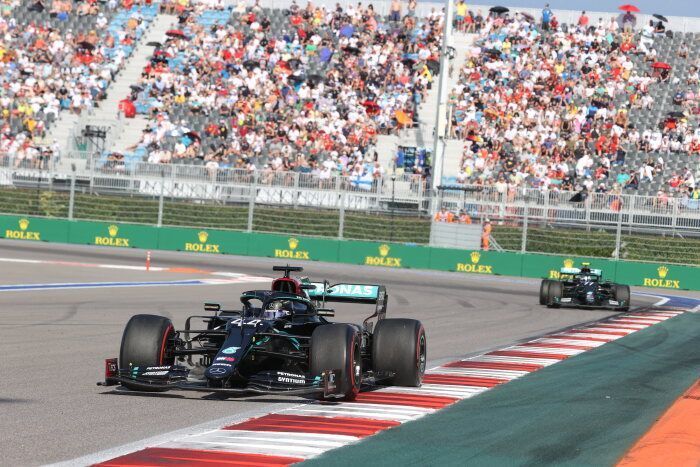 The latest episode of F1 Nation began like most: with a montage of the race preceding its release, immediately followed by discourse among hosts. Immediately, they discussed the blunder made by Mercedes and Lewis Hamilton that saw the duo be hit with a 10-second time penalty, with one pundit, Alex Jacques being highly critical of the team’s glaring error.

Audio of an explanation of the mistake from Mercedes trackside engineering director Andrew Shovlin followed, before the hosts digested the performance of Valtteri Bottas, and joked about the ‘Netflix curse’ – after what happened with the team in Germany.

The duo also spoke on Renault’s failed attempt to swap their drivers Daniel Ricciardo and Esteban Ocon around, before delving deeper into the state of the relationship between the two drivers of the French F1 team, dedicating a segment to the topic.

Having thoroughly discussed the matter of Renault, Jacques offered up the opinion that the French team have been unable convert good performance to tangible results as their close rival McLaren has. This led to greater discourse about what team might occupy third in the championship, and the two hosts split their bets, dividing them equally between McLaren and Renault, Jacques voting for the former, and his co-host Tom Clarkson, the latter.

After some further chatter about the Russian GP and the early crashes, the conversation shifted to that of Stefano Domenicali’s appointment as F1 CEO. To contribute to this discussion, Mercedes boss Wolff joined, immediately sharing positive things about the former Ferrari engineer.

Wolff was complimentary of Domenicali’s personality, and credited him with an appreciation for purity in the sport, before he discussed the championship that the Italian is inheriting after being controlled by Chase Carey for three years.

As he has repeatedly, the Austrian admitted to having had ‘initial talks’ with F1 to fill the role, before he stated with absolute confidence that Ferrari would not have green-lit his nomination if he had become a candidate for the role. He clarified that this is not meant as a dig at Ferrari, as Wolff confessed that he likely would not have allowed the appointment of a rival team principal to the position.

He went on to discuss the future of himself and Hamilton, as well as how he views F1 at this stage in his career. This was before ending on the note of Hamilton’s record-equaling potential at the Nurburgring. After this segment drew to a close, so too did the episode after a few more minutes of positive discussion of Sochi.

Here’s the link of the F1 Nation podcast: https://podcasts.google.com/feed/aHR0cHM6Ly9hdWRpb2Jvb20uY29tL2NoYW5uZWxzLzUwMjQzOTYucnNz/episode/dGFnOmF1ZGlvYm9vbS5jb20sMjAyMC0wOS0yODovcG9zdHMvNzY5Mjg5MA?hl=en-IN&ved=2ahUKEwjI4rmRxJDsAhUd6nMBHUTkDS8QieUEegQIHxAF&ep=6