F1 has posted a steady audience for the 2020 season – whether TV and or digital platforms – as Hungarian GP gets highest views.

With the F1 races in Europe and Gulf region, the race time were not favourable for a lot of the market. There was a growth still in YoY with Russia showing 71 percent increase. Likewise, China showed 43 percent increase, Netherlands 28 percent, UK 10 percent, Germany 5 percent and USA 1 percent.

It was seven percent higher than the 2019 edition, as the new events like Portugal saw 100.5m views, Bahrain’s outer track saw 98.1m views and Turkey had 89.1m views. The digital growth of F1 continued to see a massive rise, though, after success in 2019.

As per Shareablee, F1 was second fastest growing sport with 35m total followers, which is 99 percent increase in 2020 when compared to other sports.  In terms of the sport itself, its was a 36 percent increase from 2019 – across Facebook, Twitter, Instagram, YouTube, Tiktok, Snapchat, Twitch and Chinese social platforms.

The digital growth was possible due to 20 percent uplift in videos during the course of the 2020 F1 season. Even the ESports series saw a good growth, achieving a total of 11.4m live stream views across all social platforms, which was 98 percent increase in 2019.

On the side of it, F1 ran surveys and from the 6000 who entered, 72 percent thought the sport improved over the last two years, while 68 percent believed it is in good hands under Liberty Media and 71 percent were satisfied to be a fan of the sport.

Looking at 2020, 90 percent felt F1 handled the COVID-19 return well with its safety measures, where 81 percent thought they did well to communicate with fans in the lockdown and 88 percent felt positive about the makeshift 2020 calendar.

“Last year was an unprecedented time for everyone and Formula 1 had to adapt to the challenges presented by the pandemic,” said Stefano Domenicali. “We delivered 17 races, something many thought impossible earlier in the year. We did it safely and brought excitement and new races to our fans around the world.

“The audience figures for 2020 show the strength and resilience of our sport, with average audience figures in 2020 at 87.4m and a total season cumulative audience of 1.5bn. We had strong growth figures in China, the UK, Netherlands, Germany, and the USA, combined with the huge boost in our digital figures.

“We saw only a marginal reduction in TV audiences, caused by multiple reasons but clearly driven but a shortened and limited geographical calendar compared to 2019, but something every major sport has experienced in 2020. We are proud of what we delivered in 2020 and know we have an incredibly strong fan base and audience platform to grow in the coming years.

“We are delighted our fans feel a strong satisfaction with the sport, our season, and the way we responded to the global pandemic. We are looking forward to the start of the 2021 season after the winter break and we know our fans are as excited as we are to get racing,” summed up Domenicali. 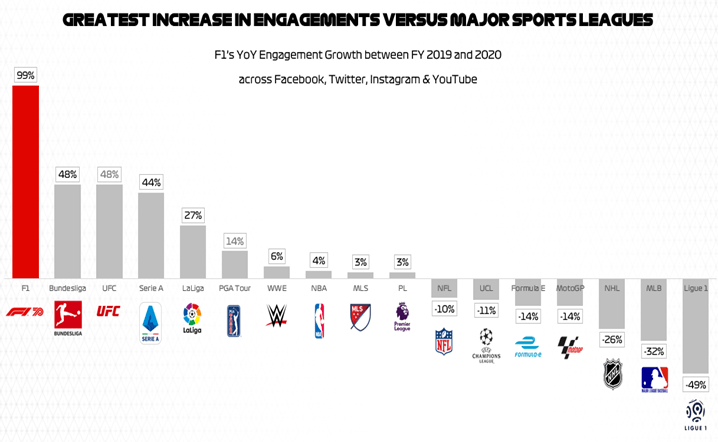