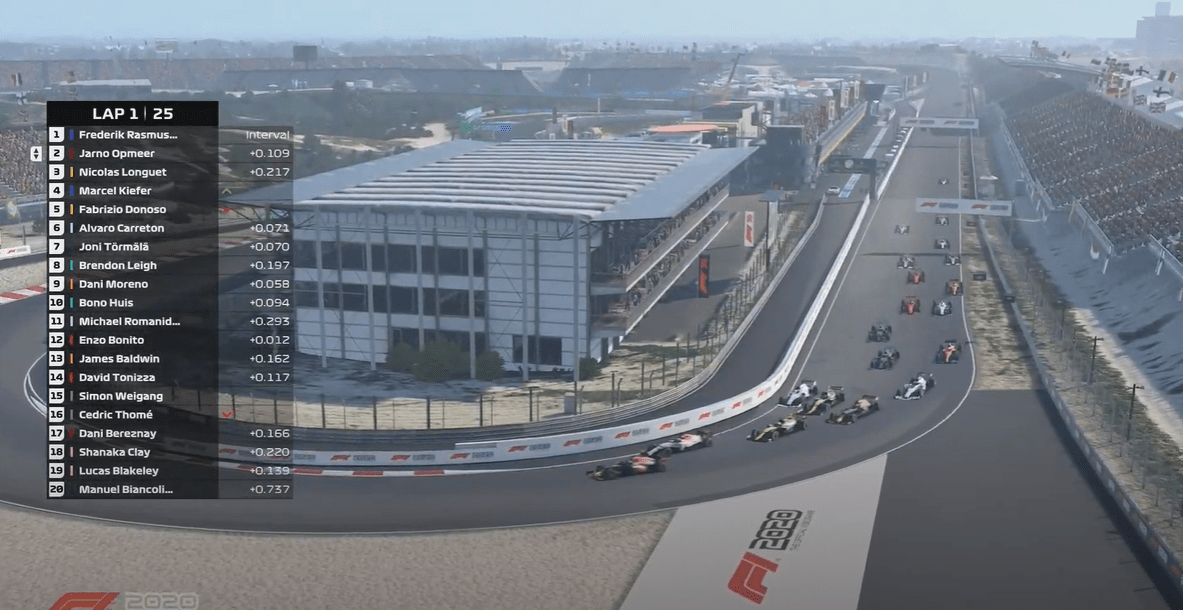 The 2020 F1 ESports series resumed after a break as Red Bull Racing and Alfa Romeo shared the wins in Netherlands, Canada and Austria.

The 2020 F1 ESports series resumed after few weeks break with three more races in Netherlands, Canada and Austria, as Alfa Romeo and Red Bull further strengthen their stronghold onto the respective championships.

The first race of four mid-week F1 ESports rounds began – somewhat unusually – with a calm start from Red Bull’s Frederik Rasmussen on pole. The decorated driver lost the lead later on, but would dramatically reclaim it as the race around Zandvoort neared its end.

The driver from whom he had snatched first place – Alfa Romeo’s Jarno Opmeer – ultimately held on to second place, situated in between two Red Bulls, the one trailing him being that of Marcel Keifer, to round out the Top 3 positions in Race 4 of the 2020 F1 ESports season.

In Race 5 at Circuit Gilles Villeneuve, drama would ensue after the start saw Ferrari’s David Tonizza – on pole – lose the lead into turn one to a resurgent Opmeer. The Alfa Romeo driver would go on to win after having major contact with Tonizza.

It sent the Ferrari driver out of contention as the podium was rounded by the Red Bull drivers as Rasmussen was once again ahead of Keifer. Here’s how Day 1 underwent with Race 4 and Race 5:

The second day saw another strong Red Bull presence on the podium was in Race 6, this one held at the Red Bull Ring and was won by Keifer. Rasmussen joined him in second, having held off Opmeer to form an eerily familiar podium.

Unsurprisingly, Red Bull took an assertive lead of the team’s championship after the three races which saw unwavering presence in the top three for the F1 ESports team. They now sit with 185 points in the standings leading Alfa Romeo (165) and Renault (65).

Meanwhile, the drivers’ standings has Opmeer, though, eclipsing both of the Red Bull drivers in the championship, as he leads with 123 points, with Kiefer in second with 96 and Rasmussen in third with 89 against his name. Here’s how Race 6 panned out:

…and the teams' championship!@redbullracingES now sits at the top of the #F1Esports team table 🏆 pic.twitter.com/LAI5qyEwUI